Deepa Mehta's Water (2005), a Canadian-Indian co-production that concludes the director's 'elemental trilogy,' is foremost an object of social protest against the continued practice of child marriage in India, and particularly, the Hindu prohibitions against remarriage placed on widows of any age. Mehta's film, situated during the reform-minded late 1930s, tells the story of Chuyia, a seven-year old widow who is sent off to spend the remainder of her days in a monastery that we later discover is financed by the prostitution of another of its inhabitants, the radiant Kalyani (Lisa Ray). 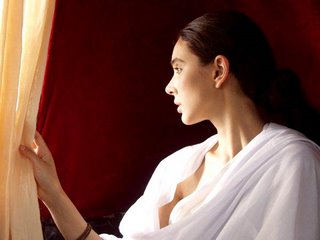 Like the much younger Chuyia, Kalyani never did meet her husband, but has been nonetheless conscribed to an existence best described as a sort of living death -- the only other options that these women have, we are told, would have been to burn themselves on their husbands' funeral pyres or to marry their brothers-in-law.

The rambunctious pre-pubescent quickly befriends the twenty-something Kalyani, as well as an ancient woman she calls "Auntie," but runs afoul of the shrill mistress Madhumati, whose only companion seems to be Gulabi, the transvestite "eunuch" and pimp who whores out Kalyani. When Madhumati learns of Kalyani's plan to marry the liberal-minded law graduate, Narayan (John Abraham), she chops off the younger woman's hair -- until now, she is the only one who has been allowed to grow her hair long, owning to certain economic imperatives -- and locks her in her room. After being freed by the religiously-conflicted Shakuntala (Seema Biswas), another of Chuyia's early antagonists who will later become one of little girl's chief advocates, Kalyani joins Narayan in preparation for their union. Kalyani's fellow widows celebrate by flinging vibrantly-colored powders (including an incandescent shade of fuchsia) on one another, as the tragedy of their existence seems to have been mitigated by the social reforms championed by progressive political paragon, Mahatma Ghandi. 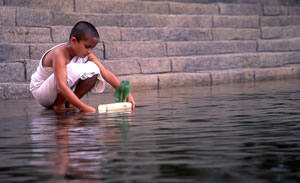 Yet, the logic of Mehta's social critique does not allow for such a happy resolution. After Kalyani inquires as to whom Narayan's father is, she abruptly ends their engagement. Without providing further spoilers, suffice it to say that Chuyia will be subjected to the same ruinous experience that assured the former's tragic end. The point is that the restoration of the familial structure, long an axiom of the popular Indian cinema, is here denied its currency; such conservatism is disavowed by Mehta's progressive platform.

Rhetorically, Water belongs to a tradition whose origins can be traced back to Satyajit Ray's epochal Pather Panchali (1955), which itself challenged India's dominant popular mode by bringing neo-realist social description to a cinema that similarly excluded the use of diegetic song picturization and epic temporal structures. (For instance, Bimal Roy's Do Bigha Zamin [1953] likewise invested its content with a neorealist style, though it maintained Bollywood's musical and epic conventions.) 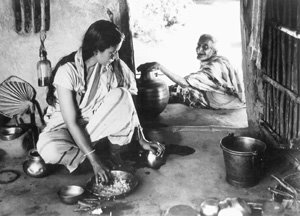 In the case of Water, however, Bollywood-styled music is still utilized, though not in the typical diegetic manner -- this is to stay that the characters don't themselves sing, though the narrative placement of the numbers and the choices of the singers' voices effectively dictate their emotions. As such, a perfunctory realism is maintained, while the conventions of Bollywood cinema are referenced (and revised).

Likewise present are a variety of Indian character types, which find rather direct correspondences in Ray's corpus. There is the Bengali archetype of the urbane, well-educated, liberal-minded son who returns to the countryside (cf. The World of Apu, 1959); his friend, the lazy descendent of aristocracy who embraces Western mores (cf. The Chess Player, 1977); the rascally, toothless old woman (Auntie) who befriends Chuyia (cf. Pather Panchali); and of course, there is the head-strong, if somewhat mischievous child protagonist, whose perspective guides the narrative -- all the way down to the camera's insistence eye-level framing (again cf. Pather Panchali, and particularly Apu's sister). 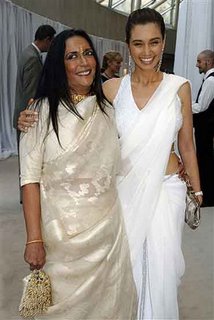 In fact, Mehta's connection to Ray's feature debut is made even more explicit by the opening compositions of a lily pad-covered marsh, which while imitating the master's indelible black-and-white photography of the corporeal world, nonetheless incorporate an extreme over-saturation of color that is all her own. Moreover, if Ray's exposition of natural beauty serves to underscore the director's ideas concerning human transience, his latter-day counterpart's co-option of this schema indicates nothing so much as an aesthetic preference and an awareness of its position within the history of Indian counter-cinema. Nevertheless, the visual grace of Water nearly matches the Ray: consider for instance the images depicting the couple beneath the giant hardwood on the banks of the river, with its powerful bleached white light pouring through the tree's tangled branches.

Indeed, Mehta's is a work unapologetically grounded in the concerns and the immediacy of this life. In this manner, the film's greatest provocation is its challenge to the wisdom of a religion that could countenance such a deplorable tradition. While, the evils of child marriage remain a distant -- and obvious -- transgression for any Western audience member, the film's inversion of the equation "God is truth" to read "Truth is god" could be counted as a rebuke to any theistic faith. In this way, the hyperbole of the melodrama -- make no mistake, Water is propaganda -- and its apparent distance from Western practices, becomes less safe than it would at once appear. Still, this is a film whose potency remains twined to one's feelings concerning the evils of child marriage and the Hindu religion's traditional prohibitions on remarriage. That Water is therfore the ultimate middle-brow art house spectacle -- one can feel bad about what is presented on-screen without ever being accused of complicity -- should not mitigate its very real power.
Posted by Michael J. Anderson at 6:05 PM