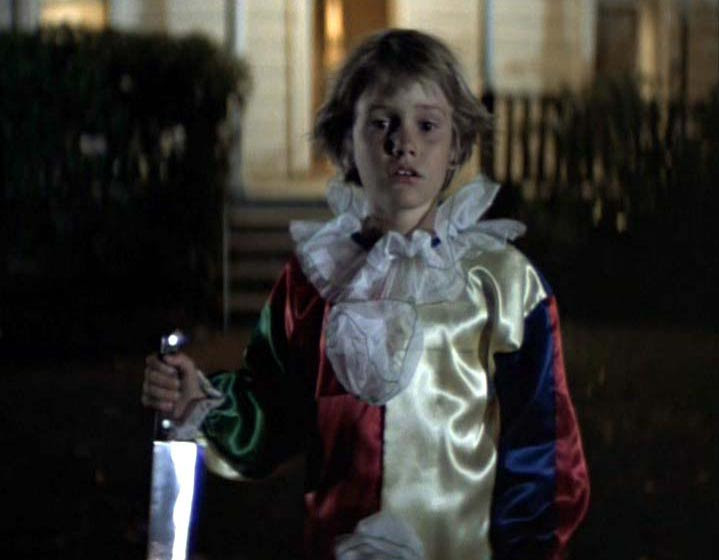 Every film critic/reviewer/scholar has his or her blind spots: chief among mine has long been horror films (from the time I dutifully avoided the slasher film bogeyman during my teenage years). Even now I have to be convinced beforehand of a horror pic's high quality - as I was recently with the highly arresting though ultimately compromised The Descent (2005, Neil Marshall); also, the inherently cinematic cave setting helped in its case - prior to spending my time in the presence of excessive carnage. Chalk it up to a puritanical adolescence, which I still believe served me well, viewing gaps aside.

Noticing John Carpenter's Halloween (1978) on IFC's late night schedule recently, and with my DVR ready to alter the time-space continuum so that I might watch it at my own convenience, I found the opportunity to improve, however incrementally, my familiarity with the genre. Suffice it to say that I was overwhelmed by Carpenter's horror standard, which in my estimation is every inch the equal of such other period generic classics as Don Siegel's Dirty Harry (1971) and William Friedkin's The Exorcist (1973) - with an ideology to match the content of these earlier films. Puritans of a different sort beware!

Halloween opens in the small town of Haddonfield, Illinois on Halloween night, 1963. Utilizing a wide angle lens, the camera tracks slowly toward a home in which we see a teenage couple making out before they steal away upstairs. The shot continues, passing around the side of the home and through the rear pantry. We already realize we are in the midst of a single-take point-of-view shot before we see a hand reach for a knife to the side of the camera. With the shot continuing, we wait as a teenage boy slinks out the front door. With the young man gone, we recommence with our movement up the front staircase. For a second time we see a hand, a child's hand, reach in front of the camera and grab an object - in this case a mask which shortly will transform the camera's visual field. Mask on, we enter the room of a beautiful naked teenager who scolds "Michael" as she stares at the camera. Seconds later he plunges the knife into her soft flesh as we continue to share his perspective. Leaving the room he heads down the same staircase and out the front the door where a man and a woman address him in the same way as they stand curbside. Carpenter's camera then reverses for the first time, showing a costumed little boy holding the bloody knife.

The film then jumps ahead to 1978 (its year of release) where we see a Doctor (Donald Pleasence) and his nurse en route to a parole hearing for the child killer, the one and only Michael Myers. Arriving at the asylum that holds the twenty-something (Tony Moran) - Dr. Loomis insists that he is beyond recuperation - we see a group of patients in white coats mulling around in pitch black near the side of the road. Momentarily, a visually-obscured Myers succeeds in stealing their car, which he will drive back to Haddonfield just in time for Halloween night, 1978.

With Myers back in the small Illinois town, Carpenter's often mobile camera, coupled with the menacing, if simple electronic score that the director himself likewise composed, provides the spectator with the unmistakable feeling that the film's on-screen subjects are constantly being watched. While cinema as an art form commonly trades on the impression that the viewer is watching life captured unawares - with a camera whose presence in space is typically effaced; that is, the players in the on-camera drama could never see the camera as in some theoretical sense it is presumed not to actually exist within the space of the narrative - here, our watching of the on-camera actors parallels that of the killer's. As such, Myers often crosses in front of the threshold of the camera, filling one of its corners with his back, or looming deep in the distance behind the actors. In this way, Carpenter succeeds in investing the majority of his picture with this voyeuristic quality. It is not simply that we could be sharing the killer's point-of-view but rather their unawareness that they are being watched, which therefore places them in danger.

Specifically, it is three teenager girls who are targeted by the maniacal murderer: Nancy Kyes's Annie, P. J. Soles's Lynda and most famously, Jamie Lee Curtis's Laurie, in her career-defining debut. Both Annie and Lynda endeavor to fool around with their boyfriends over the course of the evening. Annie is delayed when she spills food on her clothing, forcing her to strip on screen, before tossing her outfit into the washer. Lynda, however, succeeds, participating in a passionate bit of love-making on-camera with her young lover. On the other hand, Curtis's Laurie is stuck watching the children, and even when Annie does land her a date for the upcoming homecoming dance, the former protests vociferously after Annie tells Laurie's date of the latter's attraction for him. She seems to be in no rush to join her friends in their sexual activity.

It is significant, then, that only Laurie survives in Halloween: in fact, like Annie and Lynda, Myers's older sister is similarly sexually active, appearing like the others on-screen - and therefore before Myers - topless. Whether it is simply fate, for which Laurie provides a definition during class, even as Myers lurks outside the window, or it is her unwillingness to participate in the same behavior as the others, the fact remains that she is the only young woman who is saved from Myers. Importantly, she is also the lone young actress who does not appear topless on screen, even as he seems to stalk her with the greatest degree of vehemence. She does not receive the punishment of the young women who do display themselves unknowingly for Myers and knowingly for the audience. In this way, Halloween's sexual politics are definitively post-sexual revolution. Sex is punished.

This is not to argue that we don't share a certain complicity with Myers: obviously, the on-screen display of these young women is intended for the viewer; and again, we often share in the killer's visual point-of-view. (While Halloween references Carpenter's master Howard Hawks and particularly Thing from Another World [1951, dir. by Christian Nyby and produced by Hawks] it is Alfred Hitchcock and specifically Frenzy [1972] that appears to be the more direct point-of reference.)

Speaking of which, it is precisely the director's handling of this formal element - namely, point-of-view editing - that distinguishes Halloween as a work of unalloyed artistic importance. Beyond the astonishing opening sequence-shot, Carpenter routinely uses a shot/reverse-shot structure to facilitate the suspense that imbues the work. In particular, on countless occasions we see Myers somewhere in the background, lurking in the shadows quite literally; Carpenter then cuts to the person, most often Laurie or the young boy she babysits, looking on in terror. Upon the second cut, in shot after shot, Myers disappears. 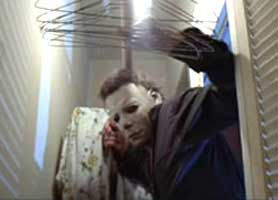 Halloween closes like it begins - with exceptional bravura - though in the case of the ending it is sound rather than sight through which Carpenter's secures his tour-de-force. Here, after being pumped full of numerous rounds by Dr. Loomis, Myers's corpse disappears after a second reverse. Following this final implementation of Halloween's key stylistic motif, Carpenter shows us a series of empty, shadow-filled and dimly-lit interiors and exteriors accompanied by the sound of Myers heavy breathing behind his mask. In this one stroke, Carpenter tells us his bogeyman could be anywhere, while of course setting the stage for Halloween II.

For further reading, including whether or not to bother with any of the sequels, see Matt Singer's earlier Termite Art appreciation. Based on his recommendation, I think I'll stop my exploration of the Halloween films with the first.
Posted by Michael J. Anderson at 1:56 PM

Thanks for the plug Mike, and nice piece. In the future, though, please refrain from the use of the phrase "soft flesh" when referring to murderous acts -- it kinda freaked me out.