The Movie that I've Seen the Most... 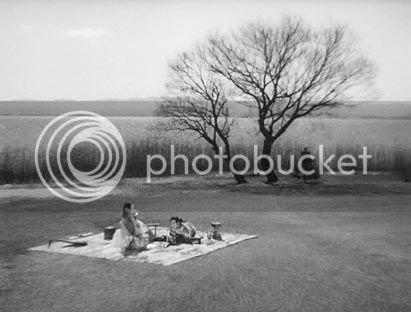 Slate recently ran a feature asking a number of esteemed film people which motion picture they've seen the most. When initially I read the piece, many of the responses struck me as improbable: for instance, does Phillip Lopate (one of my favorite critics, mind you) really expect us to believe that he's seen Mikio Naruse's Flowing more than any other film, given particularly that it is and has always been unavailable on any format in the United States? Or how about Judd Apatow and Bottle Rocket? Come on Judd, you and I both know that a sensibility like yours could have only been forged through serial viewings of Meatballs.

Speaking of which, it speaks well to the parenting skills of Lawrence Kasdan that his son Jake has seen Ghostbusters more ofter than the more ignominious, aforementioned Reitman. Given my own age and upbringing, it would seem likely that I too should cite a film similar to the junior Mr. Kasdan's -- if not Ghostbusters, then perhaps Return of the Jedi (my favorite movie when I was five, before I ever saw it), The Goonies or Back to the Future. Then again, I was never a serial movie-viewer as a child, meaning that even with these early favorites, one could count the number of times that I actually saw them on one hand. Likewise, I am not one to catch The Wizard of Oz or It's a Wonderful Life, every time it airs, though I do have that tendency when it comes to Dumb & Dumber (good thing I don't make a habit of watching TBS). No, my obsessive streak manifested itself only after I began to seriously engage with individual films as works of art. As a result, excluding those films that I've viewed in a professional capacity, a few come to mind as genuine contenders: Max Ophüls' Letter from an Unknown Woman (1948), Eric Rohmer's My Night at Maud's (1969), Robert Bresson's Pickpocket (1959) and the likely winner, Kenji Mizoguchi's Ugetsu Monogatari (1953).

The first time I saw Ugetsu followed shortly after my discovery of the Sight and Sound polls of the 'ten best films of all-time,' in the back of a Roger Ebert tome, the title of which I no longer remember. At the time, I remember my fascination with the idea that there might just exist films that I had never heard of, but which were nonetheless objectively among the greatest films ever made. I supposed that Ugetsu, like the equally mysterious La Règle du jeu/The Rules of the Game (Jean Renoir, 1939) was one of these films. I was right, but I certainly didn't get it at first -- to me, Ugetsu was an interesting, if a somewhat dull ghost story, just like La Règle du jeu was some kind of impenetrable hunting film. I was wrong... and so very stupid.

My second time with Ugetsu marked my first appreciation of the film as a masterpiece, having since discovered the director's Sanshô Dayû (1954) and Street of Shame (1956) -- and in the process, the manner in which his mise en scène served to guide his spectators' attention. Three, four, five and six (viewed over four consecutive nights in the sad comforts of my childhood bedroom, well after childhood) established my current opinion of the film: that it is that rarest of all breads, the perfect work of art. (The only other film that I have ever viewed in multiple consecutive days was Letter from an Unknown Woman -- another manifestly perfect film --which I additionally screened back-to-back one night; this distinction for me, interestingly enough, it shares exclusively with another Ophüls' film, Lola Montès [1955].) By my count, then, this latest viewing of Mizoguchi's masterpiece was my seventh, if I'm not forgetting a time or two. And as with each of my previous viewings, Ugetsu once again showed itself to possess a richness that transforms and deepens upon every viewing.

On this occasion, seeing it for the first time on Criterion's pristine DVD transfer from late last year, I was struck most (counter-intuitively, perhaps) by the narrative's management of physical reality, metaphysical reality and dream/reality. To be more precise, Mizoguchi invests these three ontological categories with the same hyper-realistic verisimilitude so that none is distinguishable by its visual treatment, not that there isn't embellishment. For example, when the protagonist Genjurô (Masayuki Mori) examines a set of kimonos for his wife, Miyagi (Mizoguchi axiom and one of the most talented actresses in the history of cinema, Kinuyo Tanaka), the latter appears through a rear doorway, accompanied by a sudden, light lilt in the film's soundtrack. Indeed, a similarly sentimental theme procures the same effect in the celebrated scene wherein Genjurô crosses through his abandoned residence before re-entering to find his deceased wife waiting for him. Of course, Mizoguchi famously films this sequence in a single, unbroken take, seemingly disclosing Miyagi's entrenched presence in the same place through which Genjurô had walked only moments before (seemingly as Mizo pulls his camera back slightly, at one point, to reveal a new trajectory). In so doing, Mizoguchi produces a narrative logic where the external world and the spiritual realm cohabit the same space. In fact, the metaphysical imbues Mizoguchi's story, from the disembodied, acousmatic voice of Lady Wakasa's (Machiko Kyô) deceased father to her own posthumous population of the terrestrial realm.

At the same time, these incursions of spiritual figures into the physical universe are on multiple occasions referred to as dreamt, providing another potential source for their presence in the narratives, as projections of character subjectivity. If there is thus slippage in Mizoguchi's narrative, Ugetsu continues to portend the logic of a narrative completely under the control of its creator. Ugetsu is the way it is because its art; it possesses no necessity to distinguish between fact and fiction, dream and (metaphysical) reality. All inhabit the reality of a work that is ultimately distinguished by its determination to convey the tragic consequences -- and fatal ones for the women of the narrative -- that result from the quest for glory, be it materially or in terms of reputation. Truly, Ugetsu is a confirmation of those Buddhist axioms (from the 'Four Noble Truths') that state that all is suffering and that suffering comes from desire; Ugetsu is, in other words, a Buddhist fable that promotes the modest values of home and hearth, contentment.

It is also a meditation on the place of art and of the trappings of success: Genjurô's dissent begins when he is flattered by Lady Wakasa's appreciation of his art. Had only he been satisfied to make his pottery side-by-side with his wife, rather than thursting for wealth and later fame, the tragic consequences of his desire would have never come to fruition. Parenthetically, both of these themes can be said to represent the director's autobiography, and can therefore bestow Ugetsu with the title of "personal art": his sister was sold as a geisha to pay for his education as a painter.

Speaking of his background, my companion in this viewing, Lisa Broad, pointed out that Mizoguchi's palette effectively registers every gradiation of black, white and gray in his unequalled mastery of visual technique. To this, let me add that Ugetsu's compositional grace is a product both of this painting in light and shadow, and also in a compositional manipulation that relies heavily upon diagonal framing that seems to bespeak an internal harmony: a spare tree in a courtyard or meadow frames a seated protagonist; jutting, perpendicular beams parallel the head-lines of conversing characters; etc. Often, it is worth mentioning, Mizo utilizes overhead angles to forge these undeniably painterly spaces.

The point is that this is an artist who is in complete control of his medium, manipulating form according to the dictates of his subject. Another telling example of his free use of the art form is the well-known sequence where Mizoguchi's camera follows a small stream of water out of a hot spring, over stones, and to a field which, by virtue of a lap dissolve becomes a grassy meadow where the ritualistic infidelity between Lady Wakasa and Genjurô. Here, the mise en scène is no longer dictated by a spatial-temporal unity of time and place, but by the emotional cause-and-effect inherent in the hot springs' passion and the devotional, nay obsessive love that Genjurô succumbs to in the field.

Ultimately, the fabulist nature of his narrative makes all things permissible. At the same, his mature style, and particular the visual grace of his mise en scène make for a work that seems to harken back to the promise of early sound cinema, as my partner also stated. Or, as I would add, were we to discover some day that cinema can not progress aesthetically beyond the 20th century, this will be the pinnacle of the art form. A cinema of infinite beauty and of deceptive complexity in its conflation of ontological categories. To echo Luc Moullet upon its French commercial release, Ugetsu is the simplest and most complex film in the world.
Posted by Michael J. Anderson at 10:19 AM

Sigh. If only I could enter you in one of those big-ticket quiz shows and just select the "movies" category over and over. Just to see the looks on their faces as you answer every impossible question about every obscure scene that ever ended up on celluloid. Sigh... A Koonie can dream, can't he?