Now At The Getty: The Religious Art of Sinai and Dresden

Running now through March 4th at the J. Paul Getty Museum in Los Angeles, Holy Image, Hallowed Ground: Icons from Sinai represents the largest American instillation of Byzantine icons from St. Catherine's Monastery on the Sinai Peninsula -- which happens to house more than half of all Eastern icons in existence. As such, Holy Image, Hallowed Ground constitutes a major event in the art world on the basis of its subject alone. Therefore, it is all the more gratifying that the exhibition not only establishes the stylistic and thematic range of the pieces, but their substantial aesthetic value as well, and at least a facsimile of their impact. These are works that don't reproduce well, however -- the pieces require the beholder to interact with them in their space. Take for instance the masterful Late 12th century Annunciation from the Holy Monastery: here, a burnished golden ray of light cuts through the large, empty gold-leaf background, depicting the Holy Spirit's descent in the scene. In print -- or on-screen -- the work's compositional grace is manifest, though it fails to reach its genuine phenomenological impact: in person, the ray of light seems to almost descend toward the Virgin when one moves in front of the icon, with the burnished ray becoming apparent from certain angles when it is invisible from others.

Another instance of this work's power in its presence can be found in the superlative 11th century Scenes of the Nativity immediately to the Annunciation's left. In its case, the work's beautiful color palette becomes visible in a manner that seems impossible in print or on line. Yet, it is not simply that the work utilizes rich hues, but that they guide the beholder's view, narrating what is genuinely a sophisticated narrational space: the viewer's gaze lands at the Mary and then the midwife in the upper center of the composition, before his/her attention is led to the magi approaching and then to a scene of their adoration of the Christ child. (This element again is not evident in print, and therefore does not fully tell the story of their readings; in person, the nativity works in much the same way as Masaccio's Tribute Money.) However, this piece's complexity does not begin and end with its color schema, but indeed finds a form to communicate multiple narrative scenes within the hilly topography of the composition -- often in clearly readable sequences. In addition, this eleventh century work (most likely originating in Constantinople) utilizes space in a fashion where form articulates content, as with the beam of light that connects the Christ child with the ethereal upper register, or with the magi literally leaving on the panel's other side (thereby giving form to the axiom that they left on a different route after being warned by an angel -- whom we see with them elsewhere). And then of course there is the exceptional detail that was once thought to be the purview of the illuminated manuscript, but again in the presence of these works is shown to be essential to their achievement.


If I am becoming a bit long-winded with reference to this single piece, it is because I have been studying it specifically for the past couple of months, in preparation for the exhibition. For the sake of total disclosure, in my new life as an art historian, I have been enrolled in Holy Image, Hallowed Ground's curator Robert Nelson's Icons seminar at Yale. Having said that, let me also say that with my intimate experience of the pieces for these past few months, I can say without reservation that Prof. Nelson's exhibition has exceeded my expectations. These are works that are not only made to be seen, but to be interacted with, in space that the Getty has recreated admirably. For those who can and do see these pieces at the Getty sometime in the coming months, this is the sort of exhibition that can make one rethink its period, and in fact the history of art. Future writers of textbook surveys will need to contend with the Annunciation, Scenes of the Nativity, St. Theodosia (from the catalogue cover; above), a remarkable 6th century St. Peter, and countless other works of similar sophistication -- not that their reproduction will tell us what we need to know about these wonderful works. 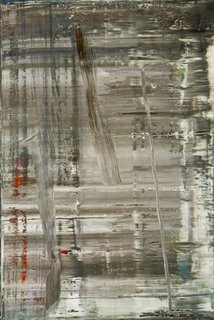 Ironically, then, another exhibition currently on view at the Getty showcases a series of works that are actually more impressive in reproduction, as a colleague of mine pointed out: Gerhard Richter's 2005 Wald Series in From Caspar David Friedrich to Gerhard Richter. These series of anti-art, semi-figurative landscapes, commissioned for this exhibit to respond to the half-dozen or so Dresden Friedrich's on display, suffer from the excessively intense over-head lighting and the space's stark white walls (in contrast to the purple tones in the two Romantic-era rooms) to be sure; even so, these spatial difficencies do not mitigate the garish palette of this modern heavyweight: the resonant golds of the catalogue are in the presence of the works, ill-conceived lemons. Moreover, the cycles themselves are incomplete, and at a point, arrest for lack of continuity -- while patterns emerge, to be sure, as with a rich series of landscapes reproducing water effects (again more poetic in print), at some point these same patterns fall apart, denying the cohesiveness that an engagement with the Romantic master would seem to dictate -- that is, if they are to respond to him at all.


As for the Friedrich's, in spite of their slim numbers, there is opportunity to learn something new about this artist -- namely, that his misty and often tumultuous landscapes were very much in the service of another project: his belief in transcendence, presence beyond surface, and particularly his devout Protestant faith. A Crucifix in a suitably Gothic frame (designed by the artist) makes this case as the centerpiece of the exhibition; however, given this point of reference, works such as the poetic Bushes in the Snow (1827-8; above) or Two Men Contemplating the Moon (c. 1819) register this same quality with greater nuance. In this way, then, From Caspar David Friedrich to Gerhard Richter at least provides a framework to view the former's metaphysical purpose -- to say nothing of giving American audiences the opportunity to see rarely-seen masterworks.
Posted by Michael J. Anderson at 1:07 AM