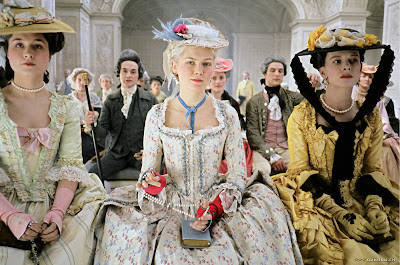 In the words of my girlfriend, Marie Antoinette is not just a girl's movie, but a very particular kind of girl's movie: a movie for girl's who don't mind quasi-long take movies with little dialogue. In other words, its for her -- or better yet perhaps, for who she was maybe five years ago; that is, the kind of girl who then (as now) knows that the first song was Gang of Four. So, I will leave the main -- albeit short -- assessment of the film to her, Lisa K. Broad, with my own similarly concise comments to follow. Enjoy.

Somewhere beneath the 80s-soundtrack and cotton-candy color palate of Sophia Coppola’s Marie Antoinette beats the heart of an American art film. Reveling in pure sensual experience, the film largely avoids the psychological terrain covered by most film biographies. The dialogue is sparse and strange, and the narrative nearly non-existent, but the vivid music and imagery demand not just to be seen and heard, but to be actively looked at and listened to. In its penchant for flat, frontal staging and cheeky reflexivity, Marie Antoinette brings to mind Sally Potter’s Orlando (minus the feminism). I also wouldn’t be surprised if Coppola had studied up on the punk period-pieces of Potter’s mentor Derek Jarman.

At once compromised and uncompromising, the film is alive with beautiful graphic compositions that manifest a painterly attention to color, light, and texture, and striking radial symmetry, but Coppola rarely allows them to linger onscreen long enough to be fully appreciated. Seemingly afraid of alienating her audience, she falls just short of the true long-take style she hints at. The subject, or perhaps the object, of each of these aesthetic meditations is the lovely Kirsten Dunst. Although Dunst’s Marie Antoinette remains completely opaque throughout the film’s duration, her body is exhibited to us so closely and at such length that a kind of phenomenological intimacy is generated that gives way to a creeping, visceral dread as the specter of the royal family’s grisly demise looms ever closer. Thus although Marie Antoinette isn’t terribly deep, it skims along the surface of things with a kind of rigor and sensitivity that escapes many films that presume to plumb the depths.

Thanks, Lisa. Let me concur with your observation that "Coppola rarely allows [her compositions] to linger onscreen long enough to be fully appreciated." While one might say that this distinguishes the director as a post-MTV artist, it remains, to my thinking, a flaw of her aesthetic. In my opinion, this same element limits her highly-regarded Lost in Translation (2003), as does her generally tendency to film in a relatively shallow depth-of-field. Perhaps one could connect such a style to the inherent shallowness of the film's subject, but to do so does not exactly flatter the maker -- as she would have produced a superficial form to express her film's superficial content.

As to Coppola's choice of topics, let me say that it makes sense that this daughter of Hollywood royalty would dare to produce a biography of this oft-vilified historical figure. That she musically situates the picture in her own teenage decade -- the '80s -- provides added resonance (in terms of the film's biographical dimension). Ultimately, Marie Antoinette manifests nothing if not the director's ambition. And in its defense, let me add that I find the connection compelling: surely, Marie would not be so out of place in our celebrity-obsessed age.
Posted by Michael J. Anderson at 9:54 PM