New Film: Children of Men & Night at the Museum

Alfonso Cuarón's Children of Men has becoming something of a cause celeb among art-focused film critics, who see its current award season neglect as inexplicable, particularly when one considers the buzz generated by such middle brow fare as Babel and Little Children. Indeed, the title for J. Hoberman's review of the film summarizes the current sentiment perfectly: "Don't Believe the (Lack of) Hype." This is a film, as it defenders might argue, that has original aesthetics ideas -- which are virtually unprecedented in studio (Universal) filmmaking -- that attempts to reinvent its dystopian generic sources and that contains vital political commentary. In other words, Children of Men is precisely the sort of filmmaking for which the art-minded branch of the liberal humanist film criticism establishment has been waiting throughout the Bush administration. As Hoberman puts it, quoting an unnamed acquaintance, Children of Men is a "disaster film for NPR subscribers."

And indeed, it is not only in these latter terms, but indeed as a work of formal invention and experimentation that Chidren of Men succeeds. Specifically, Cuarón and cinematographer Emmanuel Lubezki's (Y tu mamá también and The New World) technique of using long tracking shots brings an element of international art cinema that is typically foreign to studio filmmaking. In perhaps the film's best set piece, Clive Owen's protagonist must push his escape vehicle down a gentle incline as he and his pregnant charge flee from the radicals who are set on using the latter for political purposes. (To summarize, Children of Men depicts a world where the world's women have become mysteriously barren, until a young immigrant woman magically finds herself with child.) As such, Cuarón and Lubezki have reinterpreted action-oriented science fiction not only through the use of mobile long takes, but even in slowing down the chase to the measure that technology fails the protagonists. In this way, then, Children of Men follows in the tradition of Jean-Luc Godard's Alphaville (1965), wherein the past is figured in the future as technology has come to show its age, while reproducing the long take aesthetic of Andrei Tarkovsky and Solaris (1972) and Stalker (1979).

However, unlike Tarkovsky's work in particular, Children of Men does not produce a cogent allegory. To be sure, Children of Men often references contemporary European and American politics: immigration is curtailed in the picture (an important theme for both spheres, and a natural subject for a Mexican director working outside his country of origin); child birth, again, has disappeared (while the situation is not quite this dire in Europe, many nations do remain well below the replacement rate); Abu Ghraib is directly reference in the prison camp that the protagonists break into; proto-fascism is ascendant; etc. Thus, while Cuarón suggests that we are to read the present into his 2027 setting, few if any of these themes are worked out to effectively rend allegorical meaning. Why do these women stop having children -- is it a consequence of some unnamed ecological disaster? Does it figure a world at war? What is to be made of the pregnant immigrant woman Kee (Claire-Hope Ashitey) -- is Cuarón suggesting that there would be no children without these populations? What of its quasi-religious connotations? (Also in evidence is the film's anti-war sentiment, which is clearest in the sequence where Owen, the mother and her child pass through a sea of soldiers who are transfixed by the miracle of life; implicitly, Cuarón argues that if only we would understand this very miracle, then war would be rendered obsolete.)

Ultimately, Children of Men operates therefore on the basis of anxiety, suggesting the possibility of a dystopian future without exactly showing why such a future might come into being. (Some might say that this makes it open ended and certainly, most of its advocates may be able to cite reasons why the world is headed in this direction.) In other words, Cuarón suggests a reading of the present without factoring the implications of his themes. Interestingly enough, the director's previous studio blockbuster, Harry Potter and the Prisoner of Azkaban (2004) represents a fully-formed allegory. In that work, thematically consistent with the director's highly-praised Y tu mamá también (2001), Cuarón formulates an allegory of tolerance towards homosexuality instantiated in the figure Professor Lupin (David Thewlis) that does not simply connote but indeed makes an argument. In this respect, Harry Potter is the more politically coherent work, though its visual style, while dazzlingly baroque for an installment in the series, does not even suggest the ambitions of the later film. Perhaps some of this progression is the product of Lubezki's maturation as an artist (he did not collaborate on the Potter film, for what its worth). As with The New World (2005) there can be no disputing the flamboyance of the cinematographer's artistry, though also like that film, it is not exactly clear what if any meaning derives from those visuals. 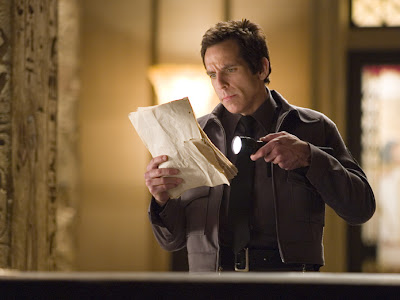 There is no similar problem with Shawn Levy's Night at the Museum, which to be fair has neither visual élan nor does it make any attempt at allegory beyond the generic contours of the children's film. It is a kid's film pure and simple, where the comedy derives from things being bigger or smaller than they are in real life, though one with supporting performances that should resonate more with its adult spectators: Ricky Gervais effectively reprises his vocabulary-challenged David Brent as the museum director, while the not-dead Mickey Rooney appears as a recently-terminated night watchman, fond of using such words as "butterscotch" as put-downs. For their performances alone, to say nothing of the spectacle of Ben Stiller fighting with a monkey -- which he slaps... tisk, tisk -- Night at the Museum rates as above average studio fare, and a welcome box office champion during this holiday season. With respect to said performances, moreover, Night at the Museum may be preferable to Children of Men for some viewers (though I can't quite say that I am such a spectator): that is for those who might not look favorably upon Michael Caine's hippie shtick. In my view at least, what's the good of a dystopian future if hippie potheads can survive twenty years of world war? I suppose this is what makes it dystopian.
Posted by Michael J. Anderson at 3:18 PM

I only made it through half of Children of Men.
I was bored since I didn't care about the plot or the characters. After looking a my watch a few times I just went home and wrote on my blog how much I hated it.

I'm not sure I understand why not explaining the reason for humanity's infertility is a flaw of the film. On a purely practical level, if the characters understood why the infertility existed they'd be a lot more capable of reversing it. The reason Kee is so important is that by studying her there is a chance they can finally understand what caused all of the world to suddenly stop reproducing.

On a less practical and more emotional level, keeping the reason unexplained can make (and, in this case, I think, does make) for a more frightening experience. And he's hardly alone in that: in four movies, Romero never explained what made the dead rise from their graves, and if given a hundred more movies, I'm sure he never would. His reasons are the same: practically, none of the characters in any of the movies can figure out why they dead are alive again, and emotionally, it adds an element of dread to the audience's experience because at any moment, for any reason at all...hell, for no reason at all...something terrible could happen.

If I may so Mr. A, what makes Children of Men so marvelous is its visceral qualities. As fine as your analytical approach to the film is, as strong as the points you make are, they devalue the impact those long takes, those characters, those situations have. It was one of the most moving, powerful, intense, scary movies I've seen in quite a while. Sorry Mr. Slade...

While you bring up some very good points, I would repeat that by referencing the present in CHILDREN OF MEN'S future, Cuaron raises the issue of causality in producing said world. I would have greatly preferred a film where everything is inexplicable, but Cuaron didn't opt for such a narrative. He wants to suggest that something in our world led to that world, and then he refuses to say what... or what he thinks is too convoluted to construe effective allegory. Really I just want to say that "he started it."

I think grounding the future in the present (while keeping the exact cause of the infertility ambiguous) is another tactic of Cuaron to enhance the aura of terror around the scenario. I think a key line spoken in the film is when Owen says, "It was already too late before the infertility thing," which suggests, as pretty much any really good dystopian film or book does, that the viewers are well on their way to creating the future presented, they just don't realize it yet.