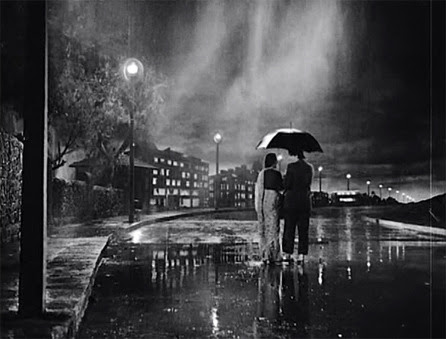 My discovery of Bollywood mimicked that of my introduction to classical Hollywood and later international art cinema: in each instance, I sought out an acquaintance with the subject after realizing that it represented a gap in my knowledge of the art. However, in the case of Bollywood, this exposure came at a pivotal moment -- at about the time when Turner Classic Movies was undertaking a fifteen-film retrospective predictably entitled "Hooray for Bollywood." Never mind, the series was a revelation, and for me, evidence that Bollywood deserved the same serious study that Hollywood studio filmmaking has long received. Thus, it is in that spirit that I am inaugurating the first in what I hope will be a series of miniature essays on noteworthy works of the Bollywood industry (especially from its classical phase -- from the late 40s to the early 1960s). For my first entry, I have selected a relatively unknown classic (to most Western cinephiles, that is) by one of "Hooray for Bollywood's" greatest auteurs, Raj Kapoor.

Raj Kapoor possesses a number of claims to fame: he is the Indian popular cinema's Charlie Chaplin, both for the discernible social conscious of his entertainments, and also due to his status as a comedic actor-director (who happens to play a version of Chaplin's Tramp in a number of films); he directed one of the era's most critically-heralded and popular works, Awaara (Vagabond, 1951), which both cemented his reputation at home, and made the director a star in the Soviet Union as well; he formed perhaps the best-known and most highly esteemed actor-actress pairing in the history of the industry with the legendary star of Mother India (1957) and future member of parliament, Nargis; and so on. The point is, Raj Kapoor is one of the essential figures of Bollywood's "golden age," and deserves to be known by anyone with a passion for cinema as art, no less than say this web site's namesake.

While the aforementioned Awaara is the natural starting point for an appreciation of Kapoor both as an actor and also a director, each of the three remaining collaborations between Nargis and Kapoor as writer-director -- Aag (Fire, 1948), Barsaat (Rain, 1949) and Shree 420 (Shri 420, 1955) -- rate as classics of Bollywood's heyday, to varying degrees (Aag being the least of the three, though even it displays a certain expressionistic artistry). Among these, Shree 420 in particular fits within the framework expressed above, and specifically, the director's debt to Chaplin. In fact, the picture opens with Kapoor running down a country road toward the camera, pantomiming in his tramp garb. Here, as in many of the passages that compose the first half of the picture, Kapoor speeds up the film stock to imitate that staple of silent comedy. Further, while Kapoor's Raj is not beyond certain petty deceptions, such as in lying in the middle of the road so that a wealthy driver picks him up, he is comparable to Chaplin's noble clown in that he is a man of integrity: as he tells us early on "speaking the truth you suffer."

After being tossed out of the first car, where we also meet underworld tycoon Seth Sonachand (Nemo) who will become Raj's employer in the film's second half, the protagonist soon finds his way to Bombay. In the process, Kapoor articulates a nationalism that he will later give a decidedly socialist inflection later on -- for now, suffice it to say that at least his heart is "Hindustani." In Bombay, Kapoor again makes use of fast-motion to indicate the disorientation that his bumpkin feels; here he is immediately warned that if he looks for a job, he'll never find one, though if he cheats and steals, he will find find 420 ways to succeed. (As a point of reference, "420" is a term for petty thieves, and is mentioned in a number of the film's contexts including an earlier road sign that reads "Bombay 420.") At the same time, Raj is not without his charms which he makes use of to secure a banana -- and later, a place to sleep -- from Lalita Pawar's street vendor. Then again, he does arrive exceedingly naive, prompting a group of card players to take advantage of the gentleman as soon as he sells his orphanage honesty medal (a rather explicit symbol for one of the film's primary subjects -- the selling, and indeed abdication of honesty).

At the pawnbroker's, Raj first spots Nargis's Vidya, whom we soon learn is a teacher and the daughter of an impoverished, paralyzed school master. Raj quickly ingratiates himself into her life -- not without the requisite resistance on the part of the beyond-reproach Vidya -- in no small measure by charming the young woman's father. Vidya, however, remains apprehensive of the sly Raj who uses a populist speech to sell tooth powder to a clan of the city's poor. Aware of his want of respectability, Raj obtains a job as a launderer; with this display of integrity, Vidya's enchantment with Raj becomes love, which will provide the framework for the picture's most famous musical number -- a duet between the principles during a rain shower. Specifically, the opening of the heavens brings the pair together under the woman's umbrella, which allows for their mutual display of their passions in song. That is, in their sudden proximity and the consequent flaming of their respective desires, Kapoor clearly offers a distention of the moment in this omni-present feature of the popular cinema.

Thus, with the formulation of the couple tentatively complete, Kapoor's narrative introduces Raj to the world of wealth and luxury that his honest life with Nargis will necessarily exclude. In his capacity as launderer, Raj encounters the sultry Maya (Nadira) who glimpses Kapoor's conjurer's touch with playing cards. Leveraging his tenuous work status, Maya convinces Raj to accompany her to a casino, where donning a tuxedo, he'll play the role of 'Raj,' which is to say 'prince.' As such, Kapoor makes explicit an earlier observation that "fine clothes are more important than human sentiment." In this new world of opulence that he finds himself thrown into, Raj is instantly respected, whereas his earlier tramp's garb generated nothing but contempt or at times pity from his social better's. Suffice it say that Raj is smitten with his new role, though not enough to help Maya again after she refuses him a cut of his winnings. However, his ultimate victim in the casino, the previously mentioned Seth, soon secures his services, seeing the talent in Kapoor's character.

At this point, it is worth noting a key shift that has occurred in Kapoor's narrative. Absent are the frequent slapstick elements, and specifically the sped-up film stock that dominate the first half. In their place, Kapoor's narrative emphasizes his new world of luxury, instantiated inside the casinos, which on more than one occasion are compared to Monte Carlo. Indeed, it is as if Kapoor's film has switched off its Chaplin influence and on that of Erich von Stroheim's masterpiece Foolish Wives (1922), which of course likewise depicts a fake prince in the world of Monte Carlo's casinos. Apropos of his character's transition from a clown (who's mask "is the best way to hide one's suffering") to that of a prince, Raj declares: "I will remove one mask and replace it with another." So too has Kapoor replaced one genre with another -- not uncommon for Bollywood, to be sure, but rarely so explicit.

Similarly unique its explicitness, in a subsequent song number where Nargis proclaims her broken heart, Kapoor shows an apparition of the actress's character step out of the body of his lead. This figure approaches Raj while the corporeal Vidya stands impassive in the distance. While, as the performance in the rain listed above should demonstrate, music in Indian popular cinema often suggests the interiority of its singers, rarely has this precise relationship been so clearly indicated -- that is, it is uncommon for a director to tell us that his characters simply feel this way and are not actually performing thusly in time and space as Kapoor does here. It is again as if he is literalizing and therefore defining the codes of Indian popular cinema.

Of course, Raj's criminal turn does not last, as any spectator of classical Bollywood cinema will have already anticipated. Obviously, Raj and Nargis will end up together, though in keeping with the director's insistence on the mutual exclusivity of material success and integrity, not on the terms for which Raj may have hoped. It is likewise worth stating that with his resolution, Kapoor's narrative reverts to its first generic form, slapstick, in keeping with the masks worn by his lead (while also adopting direct-address for a speech on collective action; in other words, Kapoor evokes The Great Dictator [1940] as well).

Before concluding, a word or two should also be said on behalf of the performances of the lead couple: in summary, they deserve their elevated position in the pantheon of film couples. As always, Nargis projects dignity and integrity in this warm-up for her subsequent Mother India, while Kapoor's Raj demonstrates a subtlety that the opening passages might suggest are far from his capacities as an actor. The truth is, Kapoor is just as capable of under-playing a scene, which he does in portions of the von Stroheim-inspired second part, where he wears the mask of deceiver, as he is of fulfilling the Chaplin-esque role of "tramp." Indeed, Kapoor's artistry as an actor in many way assures the successful generic transformations that distinguish Shree 420.
Posted by Michael J. Anderson at 10:05 PM