New Film: Half Nelson & These Encounters of Theirs 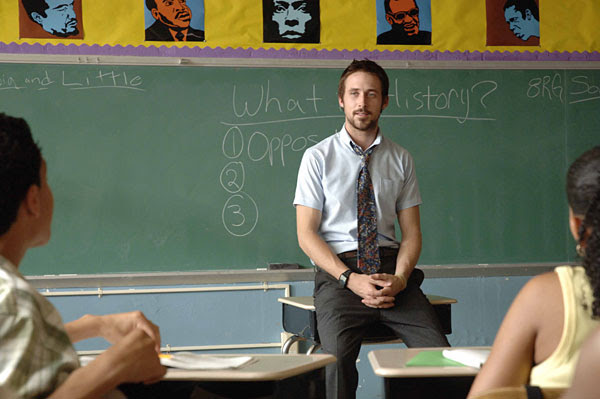 The Jus Rhyme of this year's Academy nominated films -- that is "politically aware and socially responsible" with a graduate-level ethnic studies tool box -- Ryan Fleck's Half Nelson confronts its audience with its political imperatives: namely, to generate consciousness through the film's inhabitation and dissection of its structuring "dialectics." This is to say that Fleck's classroom-centered picture (and a history classroom at that) adheres to a Marxist model of conflict-based historiography, which is disseminated primarily in Ryan Gosling's homilies on topics such as "turning points." (Actually, Gosling's Dan Dunne is at one point asked whether or not he is a Communist to which he redirects the conversation.) His students, for their part, relate moments of historical tragedy and resistance through direct address, thereby reaffirming that purpose of these lessons are not only to instruct the film's characters but to teach its spectators as well.

Even so, Fleck's narrative refuses to glorify the consciousness-generating Mr. Dunne. Principally, Half Nelson's reversal of generic norms emerges when it is revealed that Gosling's character smokes crack -- make no mistake, Fleck is endeavoring to problematize the binary between white and black where smoking crack is a behavior of the latter. One of his students, Drey (Shareeka Epps), discovers the altered educator in the ladies room after her basketball game. As we soon learn, Drey's brother is incarcerated, and his business associate, Anthony Mackie as Frank, is a drug dealer with both proprietary feelings for the vulnerable 13 year-old and also designs to involve her in the business. Ultimately, she acquiesces, though her subsequent exposure to Dunne smoking rock ends her foray into dealing.

For his part, Dunne's use of this stigmatized substance can be explained for its facility in interrogating the racial dialectical that shapes the picture's context. That he uses drugs at all reflects an attempt "to get by," to somehow satiate the feelings of injustice that undoubtedly consume Fleck's hero. At the same time, Gosling's Dunne does engage with the social inequities that plague society. On the micro level, this is reflected in his attempts to protect Drey from Frank, which he prefaces with the knowledge that he "should be the last person to say this." However, owing to the film's project of unmooring the dialectics it preaches, Frank also warns Drey to be cautious of her base-head teacher.

Ultimately, Fleck's program seeks to reconstitute social systems synthetically, by achieving synthesis through the opposition of thesis and anti-thesis. This comes into the play both in the relationship between Dunne and Drey and also in its interrogation of elements of African-American culture (be it in the language he uses, the books he reads or the more structural articulation of Malcolm X's public proclamations). With regard to the first of these, Drey's epiphany occurs when she sees her teacher in the throws of the substance -- therefore awakening her to the consequences of dealing -- while Fleck needs the help of his younger student to clean up, which provides the film with its culminating two of the pair on a couch. As such, Fleck appears to flip the conventional assumed direction of paternalistic assistance, though it is likewise clear that in Half Nelson this inversion of trope serves strictly discursive purposes and thus partakes in the same stereotypes. In other words, Half Nelson makes paternalism palatable by artfully reversing its coordinates.

At this point, I would feel remiss were I not to mention the film's performances, which remain its principle popular claim to fame. At the center, Ryan Gosling's Mr. Dunne achieves an understatement that seems to be of a type with the film's iteration of nuance (that is, in laying claim to the competing factors that forge personality and finally humanity). Similarly, Epps and Mackie also exhibit this tendency toward underplaying that mute a narrative that is in other ways less measured -- as in again the historical lessons of Mr. Dunne's class. As per Mr. Fleck's visual style, the director sustains a like staidness throughout, composing his spaces in static set-ups that intimate a certain unwillingness to intercede and on the most practical level serve to represent the subtleties of his performances. 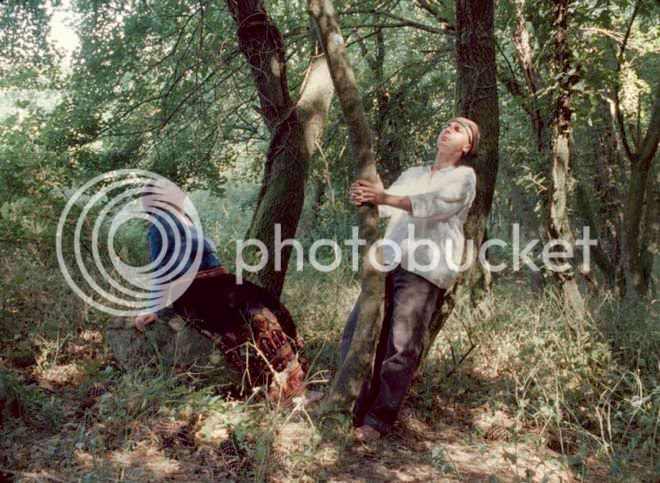 A film that forges a very different relationship between camera and performance is the similarly political final collaboration between husband-and-wife filmmaking team, Jean-Marie Straub and the late Danièle Huillet. These Encounters of Theirs (2006) begins its series of Cesare Pavese dialogues by framing its two actors with their backs to the camera as they stand on the edge of a Tuscan hillside. The pair, whom we only see speaking to each other subsequently (as they turn their heads partially to address one another) each enunciate in loud, unmodulated voices. As we soon discover, they are both gods, albeit gods dressed in inexpensive modern clothing. They are also gods whose claim to human worship have become increasing tenuous; to be sure, it is made quite clear that humanity does not need these immortal beings. Hence, it becomes apparent that Straub and Huillet are de-mystifying their inherently spiritual subject matter both in the specificity of the conversations themselves and also by making beings to appear as people in a relatively familiar setting. Indeed, there is a certain currency between these dialogues and Eisenstein's montage of cross-cultural idols in October (1928).

Nevertheless, by initially refusing the spectator a view of the speakers' mouths, Straub and Huillet reposition the voice as a mystical object that in fact confirms a presence while remaining invisible to the viewer. Of course, the voice is always de-spatialized (and unseeable) in this manner, but in the filmmakers' intentional introduction of their dialogues thusly, they remind of us of this essential property of sound -- of its invisible presence. It is only later that these sounds are embodied, that they are grounded in the physical presence of a human figure. As such, Straub and Huillet while removing the gods' mystery in one respect, are reintroducing a form of magic in another -- again, by focusing our attention on the voice's lack of spatialization. In other words, the filmmakers provide an analogy for representing the immaterial in cinema through their gradual reunification of voice and body, even if this analogy reappropriates the miraculous for cinema itself, and its accorded materiality.
Posted by Michael J. Anderson at 4:19 PM

I just read your review twice and I have no idea whether you liked Half Nelson or not. Also, your writing is getting too accessible. Please make it denser.

I too had to read this twice to have any idea whether you liked Half Nelson. (And to think I spent most of my college career reading Hegel and Marx!) I finally found the one sentence that answered my question (I think):

"In other words, Half Nelson makes paternalism palatable by artfully reversing its coordinates."

I love the use of "in other words." It seems terribly, and hilariously, appropriate.


Am I allowed to request reviews of particular films from you? Or does that kill the whole authorial organizing principle of a blog?

Emily, I would absolutely love it if you requested a specific review. My spring break is coming up so I might even have the time.

By the way, you did find the key sentence... congratulations!

From a completely selfish perspective, I like reading your reviews of movies I've seen. (That way I have a shot at following your arguments). This week I saw Zodiac, Black Snake Moan, The Lives of Others, and Tears of the Black Tiger, all of which struck me as worthy of further consideration and discussion, in one way or another. This weekend I'll see The Host (though not 300 if you paid me). I also saw my first David Gordon Green movie, George Washington, which baffled me completely--it's been a long time since I've been so unsure of what to make of a picture.

Thanks Emily, I'm on it.

This reads like it was written by a sixth grader with a thesaurus.