New Film: Zodiac & The Lives of Others 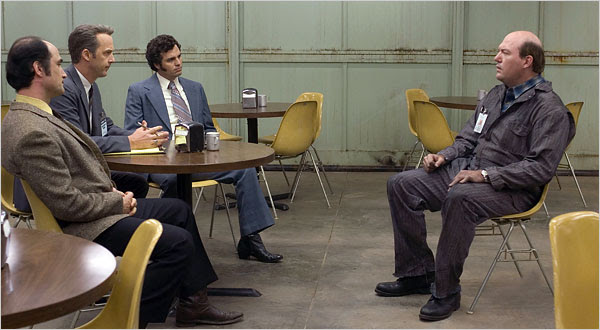 David Fincher's Zodiac shoulders what might have been an insurmountable obstacle to its success as a thriller -- the fact that the true crime case upon which the film is based remains unsolved. Nevertheless, the director's latest serial killer picture secures a tension, though it is less connected to the police's investigation -- as of course its outcome is common knowledge -- than it is to amateur Robert Graysmith's (Jake Gyllenhaal as the author of the film's original non-fiction source) subsequent intervention. As Graysmith states when his wife (Chloë Sevigny) questions his motivation, he wants know to look into the eyes of the killer and to know that he is guilty. By this point, this is all that we as spectators want as well (or at least to know the murder's identity, obviously). And much to the credit of Fincher and his screenwriter James Vanderbilt, we become as convinced of a particular suspect's guilt as does Graysmith. Indeed, Fincher and Vanderbilt's control of circumstantial evidence ultimately points to the aforesaid suspect, even as we are compelled to at least wonder about the various other leads that Graysmith pursues.

To defer suspense until the film's second part -- that is, to transfer it onto the question of the killer's identity -- we are led to share in our degree of knowledge with the San Francisco P.D. (and especially its lead investigators Mark Ruffalo and Anthony Edwards) and the city's newspaper staff (where Gyllenhaal and Robert Downey Jr.'s Paul Avery work; the latter is another contribution to Downey Jr.'s drug-fueled persona -- cf. A Scanner Darkly, 2006) to which the Zodiac killer sends his encrypted missives. It is only after the investigation effectively concludes that Fincher and Vanderbilt begin to reveal the missteps of inter-departmental communication that assured the investigation's failure. As such, Zodiac offers a cogent account of this unsolved case and its likely perpetrator, and also a viable reason for its remaining unresolved.

Ultimately, Zodiac is less a sordid true crime case than it is a portrait of how these notorious murders remained unsolved. In other words, Zodiac is not Se7en (1995) -- not to imply that the earlier film has any basis in reality -- though it does share some of its tropes: perhaps the clearest example is the sparely lit, squirrel-infested trailer of one of the picture's suspects. Otherwise, many of Fincher's voluminous spaces feature visible overhead florescent lighting. Together, it again becomes clear, as it was in Se7en that the particularity of Fincher's style can be located in his modulations of (moody) lighting. Spatially, Fincher composes many of his shots horizontally across his wide screen.

Less obvious for any specific visual tropes, with the possible exception of occasionally distracting instances of rack focus, Florian Henckel von Donnersmarck's The Lives of Others (Das Leben der Anderen) offers another example of dubious recent history, albeit in fictionalized form. The recently Oscar-feted The Lives of Others -- the German picture was an upset winner in the 'best foreign language picture' category -- gives an account of one Stasi officer's (Michael Haneke axiom Ulrich Mühe) increasing disaffection with the GDR's practice of surveillance, though not on principle but rather by virtue of its abuses.

After one of East Germany's only loyal artists is placed under full surveillance as per a leading official's romantic interest in his actress lover, Stasi officer Wiesler begins his sabotage of the process, allowing the disenchanted writer and his compatriots to produce an anti-GDR tract that emphasizes the high incidence of suicide in the former state. Thus, Henckel von Donnersmarck limns a portrait of the GDR that both articulates the ubiquity of the state's crimes and also suggests the goodness and the courage of some of its citizenry. While of course both are undeniable, the filmmakers' emphasis upon the good Stasi provides a certain cover to those who may have been complicit; like De Gaulle's France in the postwar period, The Lives of Others indicates a move toward a revisionist, heroic history.

If it could be argued therefore that The Lives of Others presents a somewhat suspect glimpse at Germany's recent past, Henckel von Donnersmarck's direction of suspense leaves little to be desired. For example, the German director's staging of the climactic scene with all emphasis transferred onto a single feature of the architecture is worthy of and influenced by the 'Master of Suspense.' Then again, Henckel von Donnersmarck's assured direction of such sequences is accompanied by inclusions of passages that reiterate what the action has already made clear -- as with the overly distended conclusion. (The Lives of Others is nothing if not middle-brow.) Even so, the film's heart-warming final revelation, however overblown, achieves an undeniable emotional resonance.
Posted by Michael J. Anderson at 12:00 PM

Zodiac offered a compelling viewing experience, to be sure, stylish and ambient. But since I saw it I have had a nagging feeling about it, and I can’t second your praise of James Vanderbilt’s script. You suggest that Vanderbilt and Fincher exert “control” over the circumstantial evidence of the case. But the narrative ignores two key responsibilities—1) to convey basic facts and 2) to employ a logical organizing principle in its arc (i.e. the events that are selectively conveyed).

For a film that exhaustively depicts details like bureaucratic bumbles and languishes in mood shots, it proves surprisingly incomplete when it comes to minor but essential details. We are given tidbits about the personal lives of our protagonists. The information isn’t particularly important, but the laziness with which its handled is distracting. Avery’s shuttle off to the Sacramento Bee barely gets a mention, despite the fact that he’s been a cornerstone of the story. Graysmith sports a revolving number of children, and the facts of his marriage are simply ignored (but present enough that we can’t help but wonder). Toschi achieves depth because of an incredibly subtle, intuitive performance by Mark Ruffalo, but he too feels underwritten.

Even more confoundingly, Vanderbilt’s script loses all of its logical consistency midway through the movie. We are subject to the terrifying compelling opening scene of two lovebirds slaughtered on a drive down lovers’ lane, and subsequently and even more upsetting (and unnecessarily gratuitous) lakeside sequence. Both are unquestionably the work of the Zodiac—a fact made clear during several newsroom sequences. But then, inexplicably, we are shown an encounter between a mother and a baby and a man that we later learn may very possibly not be the work of the Zodiac. In fact, one of Graysmith’s epiphanies occurs when he realizes that the Zodiac may be taking credit for a cruelty he didn’t commit. This begs the question—who, then, is telling us this story? Why are these particular stories being shown to us? Doesn’t this inconsistency then throw major doubt onto everything that we’re seeing? Why should we buy any of it, if we’re not able to orient ourselves within the narrative?

Of course, one could argue that this is what Vanderbilt and Fincher intended—that such seeming inconsistencies replicate the feeling of confusion and disorientation felt by the police, media, and spectators. But the film isn’t consistent enough for this conclusion. It wants to simultaneously present us with a straightforward, conclusive narrative (anyone who watches it believes the guilt of a particular person) and replicate the mind-fuck that was the Zodiac to those who fell prey to the allure of the mystery. But it fails to delineate the multiple perspectives within the one story, and the result just kind of jumbles together. Though it’s engrossing, atmospheric, and at times truly terrifying, it winds up feeling muddled and a little bit empty.

That’s what I thought, anyway.

I just saw the movie today and in response to your comment about the "incomplete" nature of the screenplay I have to disagree. Avery going off to the Bee, or Graysmith's relationship with his children needn't receive any more attention than they get because the movie is about the all-encompassing search for Zodiac. When Avery becomes to booze-addled to contribute, he is no longer important to the story and best serves it by disappearing and representing what happened to many of the people who became consumed (perhaps afflicted) with solving the case.

I liked the way the narrative shifts from protagonist to protagonist, from Avery to Toschi and ultimately to Graysmith, because it represented a sort of authorial obsessiveness that reflected the characters' own: Fincher's only interested in whoever has the best juice on Zodiac on any given moment, and that's who he's going to follow. At some times that means following the killer himself, or maybe following a copycat.

On a side note, I'd argue the sequence at the lake is not unnecessarily gratuitous specifically for the reason you provided: that it is deeply unsettling and leaves an impression on the viewer through the rest of the film and long after it's over.

As you said, that's just what I thought anyway.

Its truly good movies, I know not all people could enjoy watch The Lives of Others, What is truly amazing is that this is Florian Henckel von Donnersmarck's directorial debut, and he maintains a masterful hand throughout and keeps the story and the tension rolling from the first scene of interrogation which is filmed back and forth between a tape educating new Stasi as to interview techniques and to the actual cell itself where it was recorded.