Pirates of the Caribbean: At World's End & The Recent History of the Sequel 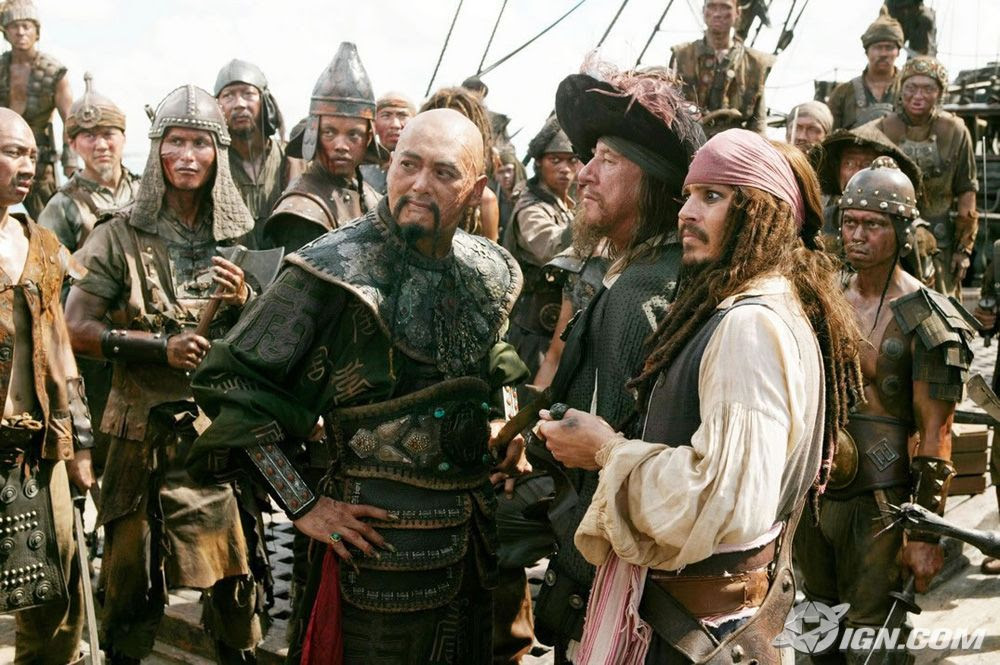 Gore Verbinski's Pirates of the Caribbean: At World's End, the third installment in the director's 'tent-pole' franchise, opened on approximately 11,500 screens in more than 4,300 theatres en route to box office receipts totaling $139 million domestically and $251 million in 102 foreign territories. Both numbers place Verbinski's latest second to Sam Raimi's third installment in his tent-pole Spider Man franchise - released less than a month ago. Add to these the third Shrek film, released between the two, and we have witnessed a fifty percent increase in the number of $100 million openings in the previous month.

We are in other words in the midst of a discernible historical moment in which sequels - and particularly those comprising so-called tent-pole franchises - are dominating the business, but in a rather unique fashion: by opening to unparalleled numbers before dropping off precipitously thereafter; these films are making a good portion of their budgets back right away. The model may be relatively new, even if the sequel is far from it.

At the same time, all eras are not so inclined toward the sequel. For example, of the 16 films made between 1992 and 1998 that rank among the all-time top 100 box office champions, only one, The Lost World: Jurassic Park (1997) is a sequel. This was the period of the prestige blockbuster, i.e. Titanic (1997), Forrest Gump (1994) and Saving Private Ryan (1998), making it a throwback of sorts to the biggest grossers of the early 1970s, that is to The Godfather (1972), The Sting (1973) and The Exorcist (1973), all of which contended for Academy awards before generating sequels - with only The Godfather, Part II (1974) equalling the original in prestige and ambition (and none besting the original at the box office). That is, Coppola's second is the only of these that does not appear to be exploiting the success of the original, but building on it.

By contrast, six of the ten highest grossing films thus far this decade have been sequels, with two more the first installments in future franchises: Spider Man (2002) and Harry Potter and the Sorcerer's Stone (2001). Few of these have been mistaken for pictures of quality, for better or for worse. For a comparable period, one might look back to the 1980s with the second and third Star Wars pictures, the Indiana Jones franchise, and the sequels to such highly successful pictures as Ghostbusters (1984) and Back to the Future (1985) led at the box office. Few of these films can claim a high level of ambition, though most of their sources are similarly outside the picture-of-quality prototype.

So that leaves Pirates of the Caribbean: At World's End squarely within the latest instantiation of a sequel-driven box office, made to open in 4,000 theatres and quickly drift the viewers' thoughts with the next spectacle opening on an even greater number of screens. Verbinski's sensibility seems to correspond nicely to this system, delivering films that are essentially a series of spectacles or attractions, often lacking a clear sense of how the episodes follow one another. It just one set-piece, one boffo special effect after the next. Hence, not only are we in a moment when opening weekend numbers seem to portend events even more than in times past, but we have a filmmaking style to match: heavy on the events, light on artistic ambition. That is, we have filmmaking for the sake of producing spectacle, not for telling a story, or more importantly in my mind, saying something about the world in which we live. It is not art for art's sake, but art for spectacle's sake - and there is a difference (see the electric color palette of Michael Mann's Miami Vice for a recent example of the former).

Don't get me wrong, I'm not advocating the return to the prestige picture either: honestly give me the latest Pirates of the Caribbean over Forrest Gump any day. History tells us rather that the pendulum will swing back, sooner rather than later. In the meantime, if you want to see quality, don't think you're going to find it in the blockbuster, and don't bemoan a time when The Godfather or even Titanic was its year's highest grossing film. Most years that distinction belongs to Ben-Hur's or the Independence Day's of the world. If you want to see the best films in the world, attend a film festival, or better yet, buy an all-region DVD player and a $5 region 6 copy of Jia Zhangke's 2006 Still Life on-line. Just don't expect to find it in Pirates of the Caribbean or even Forrest Gump.

So back again to Pirates of the Caribbean: At World's End, which I found overly-long, often times boring though not without its sporadic pleasures: not the least of which is the alternative swashbuckling seven-seas that Verbinski and company have created - Verbinski and co.'s Singapore, their glacier-filled polar locales and a beautiful, nocturnal starry sky. Also, I enjoyed the filmmakers' Once Upon a Time in the West [1968] reference - the musical riff - during the show down where Jack is traded to the other side. And, is the presence of 'the green ray' from Jules Verne or Eric Rohmer? Either way, its a nice touch, though the difference between Verbinski's and Rohmer's green rays speak volumes.

Then again, was it really necessary to inject supernaturalism into the story in the first place (this goes back to the first film and especially Dead Man's Chest)? I suppose so given its spectacular purpose, even if pirates being pirates is interesting enough in this spectator's view. For what its worth, I still prefer the Disney World ride to any of the three films.

And I have one more departing suggestion for Disney: why not a prequel? After all, this is Verbinski's Return of the Jedi, isn't it? We have our Princess Lea (Keira Knightley's Elizabeth Swann does find herself temporarily in the role of sex slave before being coronated - as a king as it happens); our Ewok village (Shipwreck Cove); et al. Wouldn't it be nice to see Jack Sparrow doing his worse for a change, earning his reputation for more than some petty double-crossings here and there? Though I'm joking, it does seem to be the next logical step, especially if Johnny Depp (wisely in my opinion) walks away; besides which, a similar experiment did initiate it would seem the current sequel-obsessed epoch: when George Lucas inflicted Star Wars Episode 1 upon the world. And to think Return of the Jedi was my favorite movie when I was five.
Posted by Michael J. Anderson at 10:16 PM