"What does it mean that we are going to have visitors from other worlds, other planets, dropping in on us?" 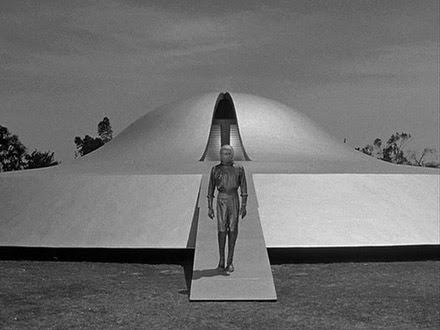 Spaceman came down to answer some things,
The world gathered round from paupers to kings,
I’ll answer your questions, I’ll answer them true,
I’ll show you the way you know what to do,
Who is wrong and who is right?
Yellow, brown or black or white?
The spaceman he answered "You’ll no longer mind...
I’ve opened your eyes, you’re now colour blind."

The reputation of Robert Wise's The Day the Earth Stood Still (1951) as an anti-nuclear allegory certainly precedes it. Indeed, as a film of the immediate post-World War II zeitgeist, few films can claim as unequivocal a connection to the era's principle political and technological anxieties and developments as does Wise's and screenwriter Edmund H. North's established science fiction classic.

After the film's opening spacecraft point-of-view (not that this short shot is revealed as such) we are introduced to a litany of broadcast reports - from India to France to Britain to the United States - each (presumably) highlighting the bright white orb circling the planet at supersonic speeds. Shortly thereafter, Wise provides an additional news anchor narrating the on-going story, while we are shown a television set broadcasting the report at the location of the recently-descended U.F.O. Wise couples the voice-over with a camera movement directed toward the box, with the audio continuing after we have transitioned to the space shown on the screen-within-a-screen. Hence, Wise reminds us of both telecommunication's' role in making the world smaller and also television's specificity - and particularly - its liveness as a defining aesthetic at a time when it was still a rarity (in 1951, 14 million U.S. homes owned a set to 42 million by the end of the decade).

Of course, it is less television's cardinality than it is the exigencies of the nascent Cold War and the threat of nuclear holocaust that places The Day the Earth Stood Still within its particular moment. Upon arriving, the jump-suited Klaatu (aka Mr. Carpenter, Michael Rennie) demands "to meet with all nations on earth." After a U.S. military official proclaims his reticence, Klaatu follows up by asking about the United Nations - another institution of the moment. Again he is declined on the basis of the UN's lack of representation for all nations. Nevertheless Klaatu communicates that he is "not as cynical about the earth's prospects." Even after the soldier responds that "I've been dealing in the earth's politics longer than you have," it remains clear that The Day the Earth Stood Still shares Klaatu's optimism.

At this juncture, we are still under the impression (from Klaatu's warnings) that the earth is under an external threat. As such, the film's obvious - if implicit - denials of the burgeoning Soviet threat would seem to conflict with the concept of an endangering other. That is, while one threat is neutralized another emerges; only the horizons shift - from the earth's nation-states to competing planets. Regardless, it is clear that Wise is offering a statement of trans-ethnic tolerance to match his signature West Side Story (1961), even if his allegory isn't yet entirely transparent.

Nevertheless, Wise does not entirely damn his rhetoric by revealing, ultimately, that planet earth's propensity for violence is what threatens its existence, not the alien other. However, to insure that earth doesn't destroy itself - or pose a threat to other planets - the alien states that Kaantu represents have installed the gentleman alien's metallic companion Gort (Lock Martin) as a check. That is, Wise offers a single executor of international/universal law in the place of the U.S.A. and U.S.S.R. (and mutually-assured destruction) of the time. Interestingly, to achieve this Kaantu and his more insightful species has foisted Gort on the people of earth, who at the first occurrence of violence will respond in turn. In other words, The Day the Earth Stood Still posits a very non-democratic solution to the world's problems: by fiat of a more intelligent elite, the people of earth will comply or be destroyed (even if it is for mankind's good). Similarly, Kaantu and his Professor associate (Sam Jaffe) stage a demonstration of force to encourage human complicity. That Wise would evoke demonstrations of force and the rule of a governing elite on the heels of the twentieth century's great age of dictators is curious indeed. 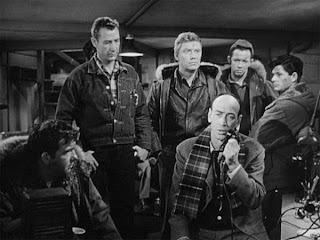 Christian Nyby's The Thing from Another World, produced and co-directed (without credit) by Howard Hawks, and released six months prior to Wise's film (also in 1951), is The Day the Earth Stood Still's profoundly pro-democratic generic double. In brief, The Thing... "tells the story of an Air Force crew and scientists at a remote Arctic research outpost who fight a malevolent alien being"; said being is first discovered as the pilot of a frozen spaceship. (For an extended plot summary - from which the above quotation has been gleaned - click here.)

With its very Hawksian emphasis on conversation, often in a heavily-populated middle-ground (cf. To Have and Have Not, 1944), Nyby's The Thing... highlights the conflict between science and religion that the appearance of the unknown visitor underscores. That is, the introduction of the eponymous Thing calls into question our long-held assumption that we exist atop the food chain. By contrast, science in The Thing... posits mankind as one among many animals, making its appearance non-threatening to humankind's identity.

Indeed, each idea is given its hearing, as the military officials (read humankind - and ultimately human religion's - protectors) and scientists debate a course of action. Again, these ideas are debated with figures interacting and discussing these alternatives in a single space, shot at eye-level, and thereby reinforcing the film's democratic ethos. Still, this is not to suggest that Nyby and Hawks refuse to take a position. Ultimately, it is with humanity - and action, commensurate with the genre - versus a dehumanizing science and inaction that they side. Surely, when the film's representative of science claims that "knowledge is more important than life... [that] we [as humanity] split the atom," it is not only the military but the filmmakers themselves that respond "and look how happy that made us."

In short, The Thing from Another World finds its own very different lesson from the horrors of Nazism, fascism and nuclear deployment: the limits of science in a world where its utilization has not always been benevolent. That is, The Thing... strikes the same realistic (vs. idealistic) note that The Day the Earth Stood Still refuses. And it does so with a form fully suited to the rhetoric it conveys. Comparatively, Wise's aesthetic is perhaps most notable for its visually plentiful black-and-white photography, securing its highest level of contrast in the picture's pitch-black nocturnal exteriors, seared by bright white streetlights. Elsewhere, Wise and D.P. Leo Tover succeed in registering their location-heavy Washington D.C. with a plush - characteristically broad - grey-scale. (This is not to suggest that The Thing...'s photography lacks the luster of Tover and Wise's; in reality, Hawks's films - including this one for which he failed to receive a director's credit - are often underrated in terms of their pictorial complexity.)

Perhaps, if there is a relationship between form and content in The Day the Earth Stood Still, however slight, it is in its insertion of location to highlight's the narrative's currency for its time, as well as the aforesaid spatial transitions introduced in the film's televisual motif. Still, Wise's picture displays nowhere near the formal rigor of The Thing from Another World, even as it it remains plausible to argue that Nyby and Hawks's remote Arctic outpost represents a more accurate account of the immediate post-war world: where a loss of faith in man's ability to ethically use science (from eugenics to the weapons of war) seems clear enough.
Posted by Michael J. Anderson at 3:50 PM

Labels: The Day the Earth Stood Still, The Thing from Another World

I'm glad you chose Wise's film as your starting point for this excellent post.

I do know that the lighting of his film still stirs nightmares for me.

Robert Wise --- his work almost seem schizophrenic. So varied in style, story and spans more than a couple decades.

Is there a common theme at all?

Maybe the Von Trapps were the true visitors from another planet?

"That Wise would evoke demonstrations of force and the rule of a governing elite on the heels of the twentieth century's great age of dictators is curious indeed."

Good point. I have always thought that the oppressiveness of Klaatu's solution outweighed the benefit -- or at least made this film creepier than it may seem at first.