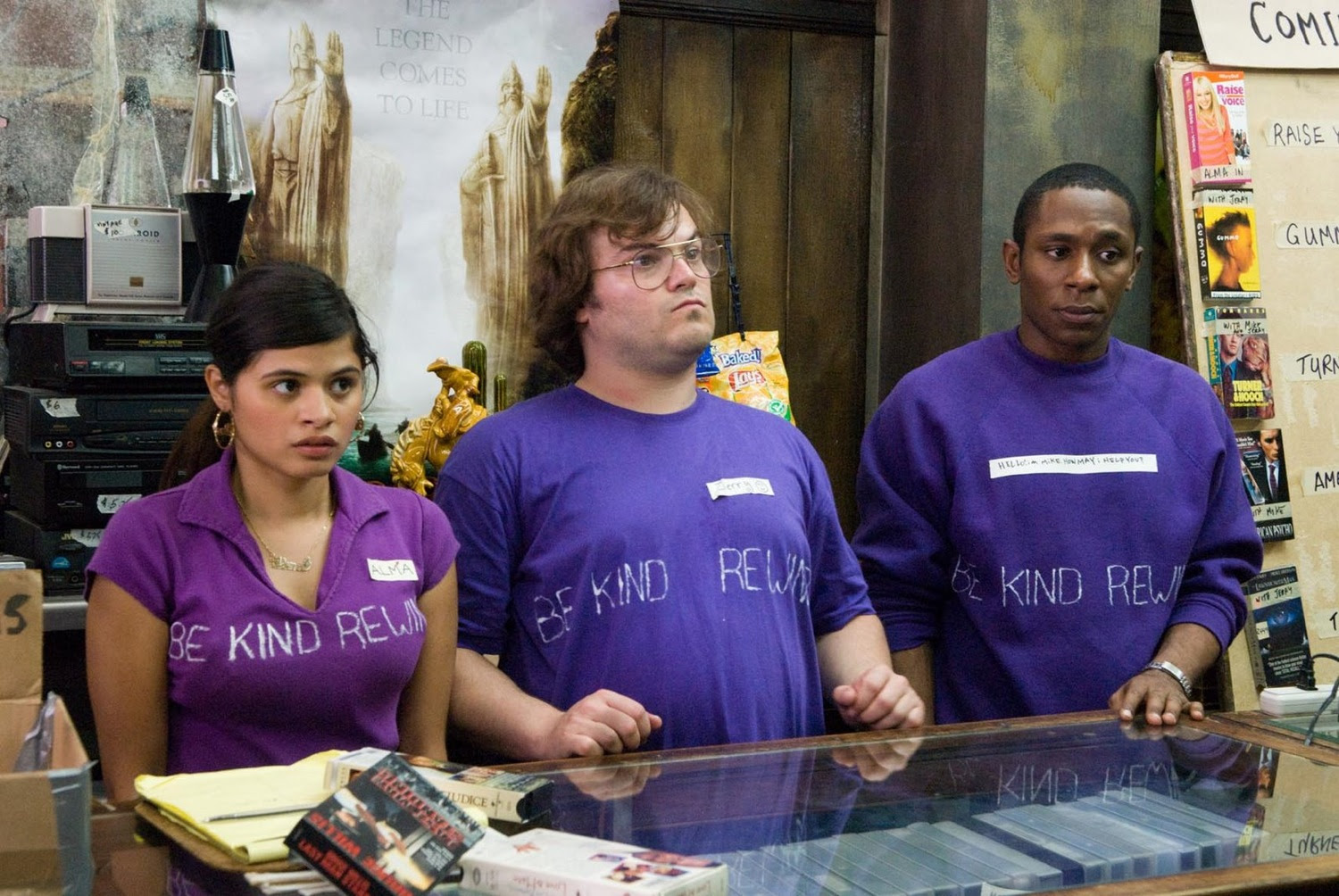 Never lacking in the esoteric, the cinema of writer-director Michel Gondry has established itself as a intellectual node for the concerns of contemporary film theory, from the storage-retrieval allegory of Eternal Sunshine of the Spotless Mind (2004) to the film/museum interface of The Science of Sleep (2006). While Be Kind Rewind is no less attuned to either film theory as a discipline or to the current horizons of the visual art world - in the case of the latter to Bourriaud's Relational Aesthetics and its engineering of social relations - the director's latest emerges primarily as a hymn to the cinephile of the very recent past. Located in a Passaic, New Jersey video store that anachronistically rents only video tapes - at the bargain price of $1 per day - Be Kind Rewind proceeds following a more extravagantly-outdated science fiction scenario involving the erasure of the shop's entire collection at their exposure to a magnetized Jack Black. With one of the shop's more loyal patrons (Mia Farrow) requesting their copy of Ghostbusters, while holding its nostalgically-tattered black box, Black and store clerk Mos Def are ultimately forced into reshooting (on camcorder, of course, over the blank tape) the video-era staple, with the latter as Bill Murray and Black as everyone else - though a third, late middle-aged African American male compatriot will subsequently play Sigourney Weaver (who will make a cameo later in the film). Remarkably, their post-production edit-free gorilla remake finds a receptive public among Farrow's gang-banger nephew and his friends who themselves demand copies of their own preferences, including another mid-1980s mainstream genre classic Robocop.

From the humble location beginnings of Ghostbusters to their no less humble subsequent productions of Rush Hour 2, The Lion King, 2001: A Space Odyssey, The Umbrellas of Cherbourg, et al., Black, Mos Def and third-party Latina participant Melonie Diaz forge something of b (or z)-film local studio using their Passaic neighbors as the bit players in their never less than ingenious - and inaccurate - re-stagings of the aforesaid video store axioms. In other words, Gondry grafts an allegory for early film production's rationalization onto the film's overarching metaphor of video's displacement by DVD. In fact, to speak of the film's early film references, Be Kind Rewind does contain an original production, on supposed Passaic native, jazzman Fats Waller - screened for the neighborhood on a white sheet (rather than on a destroyed television set; Gondry's film also, importantly, bemoans the loss of a public sphere in the video and now digital eras) that utilizes black-and-white celluloid and inventive production techniques to similuate lower projection rates and the scratches of old film stock. And then there is the filmmaker's ingenuity, which mirrors no one so much as cinema's original magician Méliès himself.

Apart from the meta-text's early film and video-era points of departure (another obvious nod is to Back to the Future, 1985) it is Spike Lee's cinema that account for many of the most direct film-specific references, from that director's Do the Right Thing (1989) and store-owner Danny Glover's implorations to the police to avoid a riot by allowing a screening of the aforesaid original production - as well as in Black and Mos Def's comical brick-through-the-window set piece - to Glover's gentle, inaudible rebuke of Black after the latter shows up to a casting in black face (cf. Bamboozled, 2000). Like Lee's earlier work in particular, Be Kind Rewind is very much concerned with the growing pains of its economically depressed, though communally-tight locale, which in the case of Gondry's picture is beset by a culturally euthanizing process of gentrification. To extend the metaphor, this is a film concerned with cinema's analogous gentrification.

So too its globalization. If there is a societal villain in Be Kind Rewind, it is the Hollywood and Blockbuster-styled West Coast Video with its multiple copies of a very limited selection of action-adventures and comedies, the only two forms that remain in the DVD age outlet. In contradistinction, Gondry's DIY fan-inflected remakes provide an antidote to these toothless blockbusters, in much the same way that his own work operates within the system: that is as products for a small, but devoted following connected not by Passaic's community ties but by the virtual network of cinephilia. Obviously, this new configuration is no replacement for the dystopian Passaic utopia imagined (though rendered impossible) by Gondry.

The above piece, as the title makes clear, represents a collaboration between my wife Lisa and I - with Lisa receiving top-billing not because of any chivalrous feelings on my part, but rather due to the simple fact that most of the best ideas were hers. For more wife and husband reviews, please check out our friends Maggie and Mike Lyon who have begun each writing reviews on the large number of films they see. If you do, you may notice the preponderance of films from 1978. The reason? The Lyon's have begun research to each construct their annual ten favorite films - I wonder where they got such a marvelous idea? - beginning with Mr. Lyon's year of birth and moving toward the present. With so much original content from two very talented film scholars, you won't want to miss any of it.