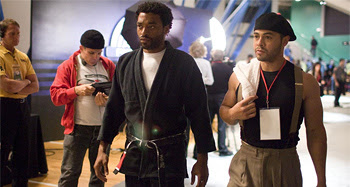 Released wide earlier this month at the absolute nadir of the film-going year, writer-director David Mamet's Redbelt fits its unglamorous premiere date as well any film possibly could.  Entering the sphere of the (axiomatically) ever-expanding mixed martial arts by the more traditional jiu-jitsu form, Redbelt immediately identifies itself as a product of the cultural periphery, a sports film for a barely if at all recognizable sport located in an initially at least unidentifiable place.  What is discernible, however, is marginality, whether it is again the film's legitimacy-seeking martial art, its vacant semi-urban landscape or the picture's working class protagonists.

Principle among the film's heroes is martial arts instructor and fight academy proprietor Mike Terry (Chiwetel Ejiofor), whose business is introduced on the perpetual verge of collapse.   Mike's problems are exacerbated almost immediately when rain-soaked interloper attorney Laura Black (Emily Mortimer) accidentally discharges a firearm, shooting out the academy's store front window.  The firearm's owner, police officer and martial arts student Joe Ryan (Max Martini) takes the blame for Laura, thus preventing the woman's possible prosecution.    This seemingly innocent action prompts a downfall that occurs as suddenly and spectacularly as Mike's equally rapid and unexpected rise to success.  (Redbelt might be most reminiscent of the director's The Spanish Prisoner, 1998.)  Mamet's world, commensurate with his recent political right conversation, demonstrates a verifiably American class fluidity - where one falls just easily as they rise.

Indeed, it is Mamet's plot pyrotechnics that are most spectacularly on display in Redbelt, along with Ejiofor's centering performance - in a more just world, it might have been star-making - and fine supporting turns from many on the cast, including especially Tim Allen.  Mamet's strength as a director belongs more to his exceptional direction of his players as evinced by both Redbelt and his strong, previous Spartan (2004) than to his mise-en-scène: the filmmaker's style is that of a televisual-inflected intensified continuity as distinguished by film scholar David Bordwell, and exemplified particularly in the film's preponderance of close-ups, among other stylistic figures.  In this respect, Redbelt looks more conventional by our current standards than the equally "B"-picture inspired Eastern Promises (David Cronenberg, 2007), which not only focused on a genre subject, but matched its topic with a classical decoupage-based technique out of place in the blockbuster era.

However, it is less Redbelt's look that stands out once again than Mamet's storytelling acumen, from his organic dissolution of Terry's breakneck success to a genre-bending finale that reifies the film's operative ethical position vis-à-vis violence.  In a certain respect, Mamet subverts his characteristic gamesmanship (c.f. House of Games, 1987) while delivering an ending that matches our genre-prompted spectatorial desires.  In other words, Redbelt's Terry finds a way to maintain his ethos in the face of a genre that seems bent on defeating such a view.

What we have, therefore, is a narrative dexterity to match Redbelt's masters of martial arts, within a film, I should add, that posits filmmaking as its secondary subject.  Former military man Terry in fact becomes an adviser on a war picture (think Spartan) headlined by Allen's boozing star Chet Frank.  Of course, this world is every bit as corrupt as that of the fixed fights - again consider The Spanish Prisoner.  Yet it is world, corrupt as it is, where success can still be met without sacrificing one's principles.  Redbelt is the first very good film of 2008.
Posted by Michael J. Anderson at 12:59 PM