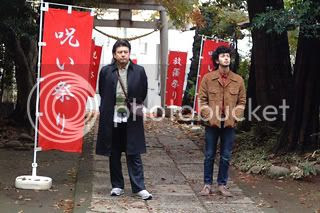 As one of the twenty-six feature-length Japanese pictures screening at this year's New York Asian Film Festival - among the forty-three films total - writer-director Satoshi Miki's Adrift in Tokyo (Tenten, 2007) may not rate particularly high on many Asian cineastes lists of must see's - considering especially the presence of such higher-profile auteurs as Takeshi Miike (Sukiyaki Western Django), Shinji Aoyama (Sad Vacation), Hur Jin-ho (Happiness) and Johnnie To (Mad Detective and Sparrow), to say nothing of its ever popular slate of Manga adaptations, J-horror and hardcore action. Yet, it somehow might be too much to expect that any of the other forty-two will match Miki's fifth feature, a comedy of extraordinary narrative simplicity and organic interdependence that finally provides a physic alternative scenario for the film's two - presently - family-less leads.

Among the film's many sterling comic set-pieces, Adrift in Tokyo opens with creditor Fukuhara's (Tomokazu Miura) arrival at slacker law student Takemura's (Joe Odagiri), where the former shoves his sock in the latter's mouth - before complaining that it has become damp upon sliding it back on - and where the latter is left with the same three-stripe Aquafresh on his rump that he proudly noted purchasing in the film's introductory voice-over. Miki registers this opening sequence in wide-angle, long shots that maintain longer-than-average durations. Here his hand-held camera is affixed to a tripod, which importantly will be eliminated for much of the film's remaining run time.

As Adrift in Tokyo proceeds, Miki's camera is indeed mobilized alongside the film's narrative. Speaking of the latter, Fukuhara offers Takemura the opportunity to pay his debt by accompanying him on a walk around the city (with its end to be stipulated subsequently by Fukuhara). With Fukuhara assuring Takemura that his intentions are neither criminal nor untoward - though there is a narrative justification that Fukuhara will soon supply - they commence their "wanderings" around Tokyo, a city that Fukuhara notes is "perfect for taking walks" becuase of its "varied scenery." In fact, it is precisely the film's setting that soon emerges as one of the film's primary subjects, be it an autumnal sidewalk or a nocturnal, neon-saturated thoroughfare. Miki succeeds continually in locating the picturesque in the world's largest metropolis. Adrift in Tokyo thusly reminds us of the paramount importance of place in this most setting-dominated of artistic forms. Of course, the signifance of the background and the film's many cityscape inserts are not inescapably readable as the film's point, and as such can procure a sense of loss in their own belatedly focused reception. Upon Adrift in Tokyo's conclusion, in other words, I felt the need to almost immediately see it again.

However, it is just as often the city's indescript corners of Tokyo that attract the filmmaker's attention. In one instance, Fukuhara and Takemura encounter a small, stand-alone watch retailer; Fukuhara proceeds to ask the proprietor how such a business can survive to which the latter responds by showcasing his martial arts prowess. In precisely such an instance, Miki effectively highlights his concern to document an evanescing city and also his supreme comic talents. This is a film that is equally parts poignant and comic.

With respect to the film's comedy, a number of the finer moments are supplied by Mrs. Fukuhara's three co-workers, who themselves constitute the picture's primary sub-plot. We are introduced to the trio with one asking the others to smell his horrifically-scented coif - evidently, we are told, it has the mossy and earthy smell of a "cliff." Or, there is their diverting turn as film extras for aged actor whose sighting is said to bring good luck.

In many respects, as funny as Adrift in Tokyo is, it is the film's poignancy that stands out. To be sure, the pair's walk - for reasons that have been elided in this review - is quite likely the final journey through Tokyo for one of the two. This finality is reflected in the picture's autumnal setting and extended into the types of places (like the watch shop) that the pair encounters. It becomes, moreover, an opportunity for Takemura to be sutured into a family for the first time in his life - in one fine instance, Fukuhara even pretends to be his father and one of the older gentleman's female acquaintances, his mother - and for Fukuhara to take his walk, a favorite pastime of he and his wife's, with a stand-in for his long dead son. In this respect, Adrift in Tokyo repeats a seemingly common recent Japanese refrain of the broken family remade by unrelated surrogates.

Adrift in Tokyo ultimately enacts an alternate past for one of the two leads, and substitutes for a future that the second might not get. In the form of comic divertissement, Miki has created a total work of art.

Adrift in Tokyo screens at the Japan Society in Midtown Manhattan, Thursday, July 3 at 4:20 PM.
Posted by Michael J. Anderson at 11:55 PM