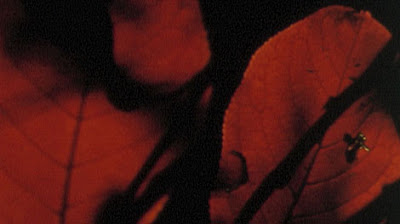 Screening under the heading "Sarabande: The Poetic Cinema of Nathaniel Dorsky," the American avant-garde filmmaker's three most recent works represent a peak in not only the artist's superlative latter-day corpus, but in the experimental cinema of the first decade of the twenty-first century - alongside the 16mm cinemas of James Benning and Tacita Dean, among others. United not only by this same 16mm format and their enveloping silence, Dorsky's most recent films (Song and Solitude, 2006; Sarabande and Winter, 2008) likewise share a preternatural color palette, abyssal spaces, and "crisp" and "soft" variations in texture. Sarabande, for example, achieves many of the most luminous hues, as with the supernatural crimson of the leaves (pictured above); an indistinct, gauzy green that saturates the celluloid; and scores of tones and their combinations from a single coral to a spectural set of lens fares that paint the camera lens. The same short, moreover, supplies one of the best examples of the final category with a soft blue along the bottom of the frame, which plays against more metallic diagonal gold streaks that descend from the upper left. Sarabande, along with Song and Solitude in particular, affirms the aesthetic potential of the 16mm medium.

Yet, it is not simply the found subject matter or even the films' extraordinary light sources that account for their successes; rather, what is truly distinctive in Dorsky's most recent films is their unwavering plastic sense. In each work, Dorsky does not so much shoot a variety of subjects through found filters or lattices, but instead films spaces that compress and erase a series of planes that alternate the deep blacks and vibrant highlights spoken of above. To quote the filmmaker, he produces "models of existence" as opposed to images of the world - models of subjective vision that articulate a set of spatial vectors which crash (silently, of course) into a single, two-dimensional composition. This is not exactly to say that the images are flat. More precisely, they play with flatness and depth, dictated by the degree of illumination found in the specific images.

Or, in the words of Lisa K. Broad, Dorsky's graphic compositions resist a theatrical cinema conceived not only as fiction, but as the cinematic space as a box that holds objects. Sarabande, etc. think of the screen as a screen. This is not cinema as painting but cinema as itself in the truest sense - a cinematic flatness.
Posted by Michael J. Anderson at 9:32 PM