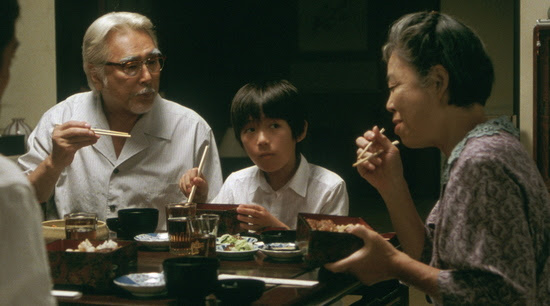 However, it is on the level of Kore-eda's characterizations that its global implications emerge - albeit through his characters' unmistakable particularities. Beginning with Toshiko, Kore-eda has created one of this (or any year's) most convincingly human screen characters, from her gentle, unaware nagging of daughter Chinami (You) to her palpable excitement at the arrival of son Ryo (Hiroshi Abe), from her good-humored, if evidently habitually recounted anecdotes of the Yokoyama's happy past - told in concert and competition with husband Kyohei (Yoshio Harada) - to insensitive digs at her widowed daughter-in-law Yukari (Yui Natsukawa), and her unwillingness to forgive an obese anniversary visitor, who comically is unable to stand after sitting on his leg for an extended duration. In fact, Dr. and Mrs. Yokoyama are in agreement that their guest's life has been a waste. Their is an edge to the film's humanism.

A similar pessimism manifests itself in the patriarch's disappointment that his son Ryo did not fulfill an earlier desire to follow his father into the medical profession. Reflecting Kore-eda's most conspicuous influence, Yasujiro Ozu, Chinami notes: "children don't necessarily grow up the way you want." Indeed, Ryo has not only failed to follow in his father's footsteps, but has recently lost his position as an art restorer. An active cell phone ringer, and his complicit wife, helps him to hide this fact, though Kore-eda's relatively tight static framing allows for his actress to showcase her character's extraordinarily subtle panic. As unemphatic as Still Walking's mise-en-scène typically is, the director's observational camera ideally suits the film's carefully shaded and gradated performances, which to a one bring Kore-eda's film to extraordinarily vivid life - from Toshiko and the squeaky voiced Chinami, to her tween daughter who preens, standing on her tiptoes and gesturing with her hand over her head, at the mention of her recent growth.

The film's greatest strength is this unshakable sense of a real family, so uncommon to the screen, which Kore-eda further populates by persons like Chinami's husband whose good nature is only matched by a complacency at no longer having to prove his worth to the family (or by Ryo's stepson, who true to preteen form, opts for a Coca-Cola/Ginger Ale mix at a self-service soda fountain; here the film's precise sense of detail is much more global than local). More critically, on the other hand, Kore-eda introduces a late temporal shift that alters the film's well-earned, very admirable smallness, as well as the narrative's carefully constructed impression of unfolding in the present; then again, this shift, more positively consider, re-focuses the narrative as universal rather than local, while highlighting its East Asian specificity - Ryo's fate, whatever his intentions, may not be dissimilar from that of his parents. Ultimately, the above quibble, if it has any merit finally, is a small one beside the picture's enormous - and enormously rare - sense of reality.

By comparison, Catalan filmmaker Albert Serra's Birdsong (El Cant dels ocells) explores a very different kind of reality in its retelling of the nativity story within the film's Icelandic and Canary Island landscapes. Here, the fact being explored is that of the three wise men's physical effort in travelling, their bodily experience of visiting the Son of God from lands far afield. That is, facilitated by the film's ironic sense of humor in which the most rotund of the three slowly slips down a hillside and later dominates a compressed exterior space where the three nap, Birdsong makes a case for his medium's specificity as a primarily haptic art form, incarnating its subjects over and above the dramatic highlights of the Biblical narrative. What the nativity narrative does not present is the physical toil, and in Serra's hand the petty in-fighting of the three devotees. Birdsong gives us the phenomenological experience of the journey - on which the narrative opens and closes - rather than the story per se.

Yet, in breaking from an evident verisimilitude, Serra's selected landscapes - and in one spectacular set-up, an image of the swimming kings shot from below the water's surface - uniformly possess a preternatural quality. (The director, in a question-and-answer noted his desire to create icons through this imagery, to disassociate man from landscape; the exact opposite, thankfully, appears on screen.) Yet, neither the sense of a reality not present in the traditional narrative nor that of an experienced duration ever lags in Serra's poetic idiom: the three magi disappear over a desert horizon, before reappearing without any clear sense of direction - a sacred journey in all its banality; Mary and Joseph sit outside their stone house, seemingly without end, under the intense Mediterranean sun and after it has set in a rapidly darkening dusk - the downtime involved in raising the Messiah. Serra renews the time image, though again to a specifically haptic effect, in a work that makes the holy, human.
Posted by Michael J. Anderson at 4:01 PM

Excellent discussion of "Still Life". Like Ozu's films, this quiet film continues to resonate long after one has watched it. BTW -- I didn't mind the epilogue one bit. ;~}

Have you gotten to see "Funuke: Show Some Love You Losers" yet. A very different (and much darker) take on Japanese family life. A little bumpier than "Still Walking" -- but very well made -- and with some wonderful performances (especially that of Hiromi Nagasaku -- also great recentlly in "Don't Laugh at My Romance").

More than almost anything I saw in the previous twelve months (see this list on my other site: http://tenbestfilms.blogspot.com/2009/03/ten-best-films-of-2008.html) "Still Walking" really sticks with me as well, very much in the same way that Ozu often does. Socially, if not aesthetically, this is very much an inheritor to the later phase in the director's art obviously ("Late Spring" onward).

On the epilogue, I am happy to hear that it didn't bother you, as I have been actively attempting to convince myself that it has an organic purpose (and thus, that it shouldn't bother me). Really, I just didn't like the unexpected voice-over, which is only a minimal, impressionistic criticism worth very little. This is a rich work, certainly one of Kore-eda's best.

I think I like all of Kore'eda's films so far pretty much equally. ;~}

I just watched a Korean film (finally released after a 3+ year long delay) that felt rather like a cross between Hong Sang-soo and Kore'eda -- Sa-kwa (which means both Aplle and Apology). It deserves to be better known -- but I suspect it may never get much attention.