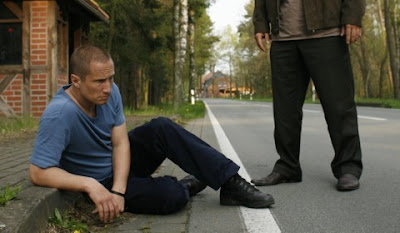 Where is cinema today? To answer this question on the level of the nation, our current decade has provided a few new answers beyond the familiar France of the postwar era or the Taiwan and Iran of the 1980s and 90s (the first and second still hold, while the third arguably does not). Among these current hotbeds, few seem as substantive and surprising as Germany and Argentina: the former has reclaimed its leading status in the European cinema through a "minor-key," intimate psychological idiom, concentrated in its Berlin School, which differs substantially from the big subjects and historical specificity of the nation's 1970s New German pinnacle, whereas Argentina's rose to a position of prominence just as the South American nation commenced its economic free-fall in the late 1990s. Naturally, questions of class have proven cardinal to the work of many of Argentina's leading filmmakers.

Back across the Atlantic, writer-director Christian Petzold's Jerichow establishes a similar class consciousness in its exposition of dishonorably discharged ex-soldier Thomas's (Benno Fürmann) ascension from the bottom of the economic food chain, following his unexplained beating and robbery - ostensibly to pay off an outstanding debt - in the film's opening scene. Petzold's accomplished direction is immediately manifest: a hand-held, mobile framing of Thomas immerses the spectator in the film's diegesis, while identifying the narrative's principle focus from the opening shot; after a cutaway to car filled with gentlemen arriving at what appears to be a funeral, this group escorts Thomas back the latter's country family home. One of these gentleman finally breaks the silence with a tender "sorry" that he then follows immediately with a screaming tirade where he begins by shouting "damn it." After a line of expository dialogue reveals the setting to be the East, the aforesaid gentleman discovers a cache of bills that Thomas had been hiding from the group. This leads to a blow to the back of Thomas's head, and his consequent night passed out in the grass of his newly deceased mother's homestead.

In the meantime, Petzold briefly depicts the film's second and third leads speeding along the countryside as Thomas lays motionless in the vicinity. Petzold withholds their meeting momentarily, he is a filmmaker who systematically delays and postpones acts of confrontation, instead mapping wealthy Turkish immigrant Ali Özkan's (Hilmi Sözer) driving itinerary, which returns to the narrative fore shortly with Özkan's inebriated fishtail off the side of the road, into a nearby river. Thomas, who is at the moment walking home with his groceries, purchased by food stamps, aids the driver, taking credit for the accident to save Özkan from having his license revoked (after spotting a roll of cash on the driver's seat). Thomas drives Özkan home where he is introduced to the latter's beautiful German wife Laura (Nina Hoss), who slips cash to the romantically interested Thomas as he begins to walk off.

Özkan, however, arrives at Thomas's shortly thereafter, with a job proposition: having had his license suspended, Özkan has use of a driver to shuttle the gentleman between his many food stands; ex-military man Thomas, for his part, rapidly shows himself to be very capable of not only the stated position, but also as a bodyguard for the Turkish entrepreneur. Of course, Thomas's presence also poses a romantic threat to Özkan, who barely masks his culturally-reinforced jealousy with leading questions concerning his wife's attractiveness. This envy compels Özkan to demand that Thomas follow Laura as she drives to a vendor not on her official itinerary - again, there is s subsequent, delayed pay-off for this plot-line - and further, to orchestrate some beach-set intimacy between the pair, with Özkan looking on furtively. Hear, Özkan demands that the pair dance, which they do closely in the foreground, as the former slinks off into the distance. As such, Petzold perfectly visualizes the film's central narrative thrust with a new couple forming with the recession of a third.

After nearly falling from a nearby cliff where Özkan attempts to spy on the pair, Thomas and Laura take the drunk gentleman home. As he is about to leave, Thomas passionately embraces Laura in a hallway just off from Özkan's bedroom; the pair slip down to the floor where they commence screwing with Özkan only a feet away. The latter eventually calls for his wife, providing yet another delay in narrative - and in this case, physical - fulfillment, to which of course Petzold will return.

This recurrence occurs on the occasion of Özkan's departure for his homeland; after Thomas drops his employer off at the airport, Petzold lingers long enough to show Özkan staying with neither Thomas or Laura aware of his presence. Still, Petzold continues his strategy of narrative delay even here, with Thomas first rebuffing Laura's advances, and second with Özkan's return not corresponding to their preceding adultery. Without elaborating too much further on this latter point, suffice it to say that the film's withholdings always do eventually find confirmation; Petzold maintains a high degree of consistency on the level of narrative structure throughout, facilitated by the director's skilled control of not only narrative information, but of an often voyeuristic visual field.

Then again, Jerichow does maintain a second, social dimension hinted at in Thomas's food purchase and visit to a work agency. He is at the very bottom of the economic latter, following again his dishonorable discharge and the death of his mother, where he meets the wealthy immigrant Özkan. In this regard, Petzold reverses traditional economic cliches, procuring a narrative that trades on German class anxiety rather than on a simple description of racism. Here, it is the Islamic immigrant who has the upper hand in a new Germany, not only over the economically disadvantaged Thomas, but likewise over Laura who Özkan later admits to have "bought." Power, as it does nearly everywhere, comes from economic rather than social status - and it is a power that is leaving the Europe of old behind.

Celina Murga's A Week Alone (Una Semana solos), co-written with Juan Villegas, likewise constructs an economically layered society, though in its case divided on the more traditional - and static - basis of an upper class deriving from the descendants of European immigrants and a mestizo lower class. The latter is represented by housekeeper Esther (Natalia Gomez Alarcon), who watches the film's set of wealthy cousins as their parents vacation, and by the twenty-three year-old mother's teenage brother, Juan (Ignacio Jiménez), who quickly becomes an object of interest for older teen cousin Maria (Magdalena Capobianco) and tween Sofia (Eleonora Capobianco). Juan, however, in arriving at the family's residence, located in a heavily guarded gated community, is made to wait outside the subdivision, seemingly for hours, even after the family matriarch confirms his visit over-the-phone.

Inside, the two families and their assorted, hanger-on friends, spend their daytime and evening idle hours playing video games, watching television, swimming - both at their house and complex pools; Juan is chastised at the latter for wearing tennis shoes (an unexplained prohibition) - inventing games, and most distinctly, breaking into the many empty homes that populate the neighborhood. Throughout their routine, Juan is largely ignored by the young men, and engaged by the two girls - particularly by Sofia who reaches out to Juan at a pivotal late juncture in the film's narrative. (Speaking of narrative, Murga's is exceedingly loose and open-ended in contrast to Petzold's rigorously controlled story structure.)

Of course, Juan, like the two girls, does possess a distinctive psychology, in his case as an outsider, in comparison to the mostly interior-less young men. Then again, Murga's most vivid characterizations are those of the two girls, whether it is the nascent sexuality of Maria who flirts and makes out with cousin Facundo (Lucas Del Bo), before throwing him over once Juan arrives, or that of Sofia who finds herself in the more precarious position of a girl on the brink of pubescence. Sofia is also Murga's richest and most endearing character, whether it is her interactions with Juan and Esther - she confesses her desire to have a first communion like everyone else (including the devout housekeeper), which her atheist parents have not allowed - her uncomfortable exchanges with her older cousin, or most spectacularly, her vocal performance at a teen dance, much of which Murga shoots in an extended close-up. For this writer, Eleonora Capobianco's amateur performance of this pop song may just be the most endearing on-camera musical exhibition since Andreas Müller's committed dancing to the Robbie Williams song in Valeska Grisebach's Longing (2006) - a film that remains the masterpiece of the Berlin School.

Ultimately it is Murga's ability to limn vivid female characters, who never devolve into ciphers, that accounts for one of the female director's greatest strength as a film artist. Likewise, Murga here, as in her superlative, Rohmer-inspired Ana and the Others (2003), richly articulates her film's setting, be it the space's warm climate (particularly in the languid nocturnal passages), the changing qualities of light from a mid-morning walk to school to the oblique angle of the sun's rays late in the afternoon, and finally to the gated community itself, with its unlocked homes, rent-a-cops and unbreachable outside walls. Whereas fellow countrywoman Lucrecia Martel (The Headless Woman, 2008) distinguishes her art on the basis of the pervasiveness - narratively, visually, formally - of her metaphors, Murga's art is grounded in the concreteness of her places and characters, which nonetheless explicitly point to social inequalities. Martel's mise-en-scène is remade in the image of her subject, while Murga's exactly observes to find her equivalent subjects.

Update: See also R. Emmet Sweeney's elegant A Week Alone appreciation over at Termite Art, with its emphasis on ritual - most memorably their collective predilection for Nesquik - and its insightful exegesis of Juan's marginal position within the frame.
Posted by Michael J. Anderson at 2:39 PM