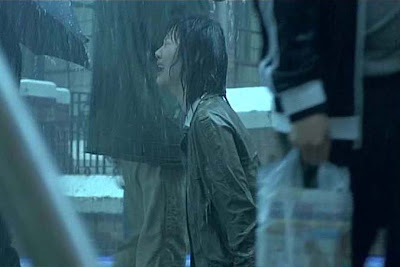 Yau Nai-hoi's Eye in the Sky (Gun chung, 2007), co-written by Yau and Au Kin-lee, marks the long-time Johnnie To screenwriter's first directorial effort, following credits in many of the maestro's finest (including, among a number of others, A Hero Never Dies, Running Out of Time, The Mission, PTU, Throw Down, and Election 1 and 2). Whether Eye in the Sky portends anything new in terms of subject matter - in our estimation, no - or world view - not for us to say - what does become immediately clear in Yau's move to the director's chair is his first-time delirium with the potentialities of the camera and sound track. Eye in the Sky is in other words the prototypical first film of ambition, with a style that one might expect to become more restrained in future - for example, becoming less reliant on punctuating zooms. Nevertheless, these very figures are in this instance well suited to the film's surveillance subject, which ultimately elevates Eye in the Sky over routine first film fare. This is a creditable if not promising feature debut.

Eye in the Sky opens with a largely wordless extended set-up, wherein Yau's surveillance aesthetic is employed to encourage the film's spectators to pay attention to the picture's trio of leads, Simon Yam, Kate Tsui and Tony Leung Ka-fai on a Hong Kong city bus. Placed in a position comparable to a viewer of surveillance footage, we do not yet have enough information to avoid incorrect inferences, though Yau will soon divide his principles into Surveillance Unit officers (Yam and Tsui, with the latter auditioning in the film's incipient passage) and criminals (Leung, as well as other Milky Way regulars including Suet Lam as 'Fatman'). In fact, it is Lam's conspicuous presence, always gnawing on something, that provides the SU with their first lead in a jewel heist that likewise opens Eye in the Sky.

Importantly, Lam's predilection for street food corresponds to Eye in the Sky's attention to the sensorium, whether it is these objects' taste and smell, or more to the point, the haptic intimacy generated by Yau's penetrating camera. We as viewers are thus given local color, and as such ritual, to augment the fixed surveillance visuals that otherwise define Eye in the Sky, and therefore to provide a means of locating the perpetrators on the narrative level. The film's surveillance footage, of course, does not presuppose the invulnerability of classical cinema, but instead depend on the visible (the camera and also the SU field agents who perform a similar task) remaining invisible to its' subjects. Eye in the Sky's frequent recourse to telephoto lenses and zooms, while again showing off the tools of the director - as opposed to the screenwriter - manufacture this sense of the viewer trying to hide him or herself from view. (To complete this aesthetic program, Yau produces occasion black & white inserts culled from supposed actual surveillance cameras and utilizes the bars of a televisual image in his optical delimitation of scenes, which he further marks with a cell phone vibration-inflected theme.)

Ultimately, Eye in the Sky makes us aware of the apparatus and the act of filmmaking that again in classical cinema is conventionally minimized. In this sense Yau's feature debut is very much a film about the camera and voyeur in space, a fitting subject for a first time maker (and here we said that his subjects have not changed). This is also a film that permits the magic of cinema to work a narrative trio of miracles at the film's end - or, as the NYAFF's program notes stipulate, it is the eponymous master and maker of the universe who is himself responsible. Naturally, Eye in the Sky's title points to the divine metaphor in the process of filmmaking, while finding a narrative cause for its Bazinian perfect "eye of god" visuals - if God could content himself with a single view- which in many cases Yau grounds in surveillance set-ups. This is a film that, for whatever its visual bells and whistles, retains the logical rigor of the screenwriting craft.

Eye in the Sky is scheduled to screen at 3:35pm, Monday, June 22 at the IFC Center in Lower Manhattan.
Posted by Michael J. Anderson at 11:52 AM