Jacques Rivette's Around a Small Mountain (36 vues du Pic Saint Loup), from a scenario by Rivette, Pascal Bonitzer and Christine Laurent, follows The Duchess of Langeais's (2007) classical subsumption of the filmmaker's arch emphasis on repetition, with a more straightforward, performing arts world-motivated presentation of the theme. In transitioning back to one of the director's most familiar environs (L'amour fou, 1969; Out One, 1971/4) - here a traveling circus in the empty-tent image of Clint Eastwood's Bronco Billy (1980) mobile Wild West show*, a director for whom it is worth noting Rivette has cited an admiration, saying that he has liked "all his films, even the jokey 'family' films with the ridiculous monkey" - the French maestro has reintroduced the primacy of fictional worlds to his film, which in this instance characteristically spill out into the world beyond the big top.

Around a Small Mountain establishes its pervasive focus on repetition through a series of performances of a comic skit, whose totally Rivette cobbles together in its multiple stagings, as he does the peak of the film's French title from multiple vantages. Alternating with these set pieces, which emit variations only on the basis of their live-ness (a suggestion that a detail of the act be changed is rejected flatly), Rivette offers conversations between the circus's participants, whether it is a nocturnal romantic confrontation staged on a found proscenium and lit overtly theatrically, or more regularly, in the afternoon interstices that follow their poorly attended Midi shows. Of particular note among these are the on-going dialogues between clown Alexandre (André Marcon) and affluent Italian fan Vittorio (Sergio Castellitto), whose presence among the troupe follows his chance meeting with Jane Birkin's Kate in the picture's incipient passage. (Kate, moreover, is noteworthy additionally for a pair of monologues that again attest to the film's theatricality.) In each of these instances, then, the repetitions of the theatrical rehearsals and performances are displaced onto daily conversations that follow the same routine template.

This overarching sameness, as much a film being un-spooled continuously as it is a play's confining written dictates (this point is confirmed by the inflexibility of the clown act noted above and to Vittorio's insistence that were he and Kate to meet again, it would be necessarily on the same terms - with her broken down on the side of the road, and he coming to her aid; in other words, like a film, the narrative cannot change), is shattered at Vittorio's behest when he learns the secret behind Kate's disappearance from the circus fifteen years earlier. Indeed, the very fact of this secret and its delayed disclosure links Around a Small Mountain to the director's earliest conspiratorial features, from his Paris nous appartient (1960) debut on through his 1970s masterworks, where additionally the liberatory dimension of Rivette's cinema comes to the fore. As in Celine and Julie Go Boating (1974), a film that remains conceivably not only the filmmaker's greatest but also the masterpiece of the 'New Wave,' Around a Small Mountain's protagonist brings down the film's fictional world from the inside, which once again is undertaken to free a female character from the world of performance's structuring repetition, which in Kate's case ironically entails an inability to perform.

In totality, Around a Small Mountain serves as an organically motivated signature for its author, with the added qualification that Rivette no longer insists on the exceptional duration of his best known work (the director's latest is a lean 85 minutes). Yet, that Around a Small Mountain so fully expresses Rivette's auteurist identify indicates that pure duration is less a necessary and sufficient condition for the characteristic Rivette feature, than it is a facilitator for its emphasis on repetition, and to that theme's incumbent insight into the making and viewing of film fiction. With Around the Small Mountain, the director has again made a film, and a very fine one at that, which once again to quote Rivette on Eastwood, "belong[s] to [him] and no one else." 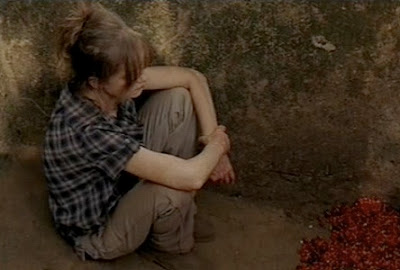 Equally a work that belongs to no one other than herself, former Rivette protégé Claire Denis's White Material replicates the latter director's singular, overtly subjective Beau Travail (1999)-Friday Night (2002) idiom, replete with their rhythmic editing pattern; preponderance of tight, medium-length compositions; and lastly, their lyrical, contextualizing landscapes. (By contrast, Around a Small Mountain, maintains an even lighting in its outdoor, southern French spaces, favoring long shot-long take set-ups that again affirm the film's connection to theatre.) Furthermore, White Material shuffles its temporal structure - in line with 2004's L'intrus, though arguably much more lucidly in the later picture, and older Rivette - to procure the strong sense of an interior narrative filter, often though (importantly) not exclusively aligned with Isabella Huppert's Maria. Denis specifically cuts from Maria, separated from her family estate, to earlier scenes depicting her coffee plantation's overtaking in the midst of civil war.

In this way, White Material registers a dream-like character, or more precisely a nightmarish valence that in some respects, to make another comparison to the American cinema of the late Carter-era, suggests Francis Ford Coppola's Apocalypse Now (1979). For Denis, the hell is an unspecified, war-torn, post-colonial African, where DJs call for revolt against the country's remaining whites, and where bands of child soldiers sport fire arms and machetes, as they prepare to ambush the aforesaid. Indeed, it is details such as the latter that White Material proves its immense topicality as one of the only recent examples of Western world cinema willing to engage with the tragic reality of its former African colonies. Denis's film is many parts of post-colonial Africa, to extend the Coppola comparison. And while there is a certain political incorrectness in highlight such ignominious realities, or to worry about colonizer subjectivity at all, unjustified in this writer's view (especially when one considers Denis's stated sympathy for the "rascals"), White Material equally acknowledges the film's French colonist's ability to leave - albeit at the great cost of their life's works - in contrast to its African nationals whose future reality promises unemployment for those lucky enough to survive civil war at all.

Ultimately, White Material is vital filmmaking both on the level of global political realities, and also that of filmic form. Of course, its very impressionistic nature also makes it among the more difficult major works of 2009, and, for this writer, one of those films most in need of a repeat viewing. Nevertheless, however allusive it might prove to be, Denis's accomplishment is unmistakable.

Note: [*] Eastwood's film manifests a proto-Reaganism in its patriotic renewal of the US, whereas Rivette's film, typical for the director, lacks such a (French) sociological context. Thus, Rivette's film, which in some respects presents itself as a final testament, does not allow for a full house at the film's end. Rather Rivette's art, emblematic not of a nation writ large but of the director's own art historical context which has become by this point classical, embraces its continued minor popularity.
Posted by Michael J. Anderson at 9:55 AM