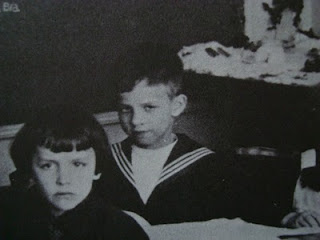 One of the many striking features of Michael Haneke’s The White Ribbon (Das Weisse Band, 2009) is the insistence with which it summons the imagery and biography of Ingmar Bergman. And it is a known fact of the film’s production history, that Haneke asked his cinematographer Christian Berger to study carefully the work of Sven Nyqvist. Curiously enough, the film ends up visually evoking Carl Theodor Dreyer (the painterly compositions) and Belá Tarr (the treatment of duration and the ominous silences) rather than Bergman himself.[i] But while it is set in Northern Germany instead of (a not-so-distant) Sweden, and takes place in 1913—a good five years before the director was born—the film does, otherwise, use his biography and oeuvre in many details.

Let me give a couple clear indicators of this spectral presence: first, elements of Bergman’s biography are almost literally referenced in the pastor’s family situation: Bergman was famously (see for instance Peter Cowie’s biography on the subject) the rebellious son of an affluent and charismatic Swedish Lutheran minister. Their relationship was tense and complicated, and often, in the artist’s childhood, involved cruel castigations that went with physical punishment, followed by periods of manifest contrition which involved kissing the father’s and the mother’s hands and asking for forgiveness. All of this is literally represented in the film, with painstaking detail. Bergman was also forced to wear red pants whenever he’d wet his bed, a visual token akin to the white ribbon that the kids are made to wear in the film. If one adds, to this, the fact that young Ingmar Bergman (cf. photograph) looked very much like the actor picked by Michael Haneke to play the boy, it becomes quite clear that all these parallels are deliberate.[ii]

Haneke does not limit himself to representing episodes from Bergman’s early life. He also quotes several of his films, most literally a scene from Winter Light (1963, to me, Bergman’s purest and finest film), when the doctor insults the midwife—his lover, telling her how much he finds her repulsive, while she listens, stoically, a contemporary parallel to the similarly painful relationship between Gunnar Björnstrand and Ingrid Thulin. And to make matters worse, more perverse, as it were, Haneke adds an olfactory dimension, there: the doctor tells the midwife that her breath stinks, to which she replies that she has ulcers, from which Bergman notoriously suffered.

It is arresting that the Austrian director (but born in Munich in 1942 (!)) should delve so much on Bergman’s life and art to portray a film supposedly addressing the roots of nazism (much like Bergman’s own Serpent’s Egg [1977] addressed the rise of nazism in Weimar Germany) and terrorism. For at first it would seem grotesque to associate the dignified auteur (for all his traumatic relationship to the Swedish IRS) with extremists and Una-Bombers of the world. And yet…

Haneke has always investigated the nature of evil, cruelty and perversion. But where in his past films, there always was something both seducing and unnerving, something decidedly awkward in his style, brewing sadistic experimentations and emotional manipulations with sheer sincerity, which seemed coterminous with the effect his films aimed to achieve in general (to me, plainly speaking, a stark philosophical denunciation of intellectual dishonesty and the ravages of contemporary bourgeois society), with The White Ribbon, he seems to have reconciled the perfection of his sibylline narratives with a clear form.[iii] But this clarity does not exactly unmask the thick mysteries of the film. We are plunged into the realm of the drama, but remain helplessly outside its deepest secrets, and the false leads with which Haneke fills his narrative (including a misleadingly omniscient voice-over) do little to help us see the light at the end of the tunnel. Like many films by Bergman, the film investigates without ever truly disclosing the lives of people gripped in the contradictions between modernity and protestant faith and traditions. Spiritually dead or crippled, they come across, however, as colder, uglier and duller than any Bergman character—something the film’s detractors have used prominently against it, fooled by its digitally doctored pretense to realism, not perceiving that therein lies its allegorical beauty. By portraying a Bergman-proxy in this universally corrupt humanity, integrating him so tightly to the pattern of his story (and History?), Haneke’s message remains ultimately uncertain. And yet, as with all his other films, unnerving and jarring inconclusive crime stories as they may be, one gets a sense, an intimation of a message, some sort of truth that would be accessible to the higher spheres alone – Soli Deo Gloria – but whose sheen can be appreciated by all of us, poor mortals, and therein lies one of the virtues and purposes of art.

So if I may now indulge in some pedantic elaborations, one way of addressing the issue, and provocatively so, would be to say that what Bergman represents here is the seed of evil in the 20th century – the aesthete and brilliant author, divorced from religion, philandering and creating an oeuvre obsessed with isolation, suffering and personality disintegration, a way of channeling a form of evil which, in others, burst out in the guise of nazism – and the adolescent Bergman himself got a taste of the fascination with Nazi propaganda during his summer stays in Germany in the 1930s. There is something titillating to this hypothesis, and to be sure the numerous accounts of Bergman’s life always present him in contrasted lights – from the wise and wonderful friend to the selfish and perverse manipulator. But trying to answer that particular question would be pointless (even if it were within my grasp). One thing is for certain, trauma seems to appear as a culprit with variable geometries in both Bergman’s and Haneke’s oeuvres: humiliation, personal and national alike, surely did not help atone for the wounds of the World War I, and to many it was one of the keys to the rise of nazism in Weimar Germany. But this is old hat, and Haneke is telling a modern tale.

Let us then, in a film so interestingly connected with familial nexuses, legacy, and guilt, ask what the legacy of Bergman specifically entails. Both Bergman and Haneke have been the champions of cinematic modernism, always probing the limits of the medium and trying to find new forms for it. When Haneke made his boldest attempt in that direction (the admirable, but ultimately flawed experiment that is Time of the Wolf, 2003) he almost quoted the title of another highly daring Bergman film, Hour of the Wolf (1968).[iv] The latter is of course a rumination on artistic creation and its potential pitfalls, ending in madness and annihilation. But even in the darkest corners of this particularly bleak film, Bergman soothes the souls of his creative demons (both insufferable and indispensable engines of art) by feeding them the darkest notes of Mozart’s otherwise luminous Magic Flute. There is music to be heard in the world pictured by Haneke in The White Ribbon, but it is amateurish and degraded, a travesty of the greatness of the original works of art. Is this degraded, mundane, pedestrian world, then, a good and fertile ground for the emergence of the selfish and psychopathic minds who shaped one of history’s most inscrutable abominations, precisely because it is almost entirely devoid of such artistic pursuits (and safe-conducts, as it were?), or not at all? After all, everything in the film seems to seep with evil: the nobility is fraught and corrupt, for all its efforts to affirm some sort of hierarchical justice. The peasants are prone to acts of violence and despair. But it is the emerging middle class of this microcosm of a village which gets the proverbial cake: founded on ideals that they might believe holy and good, the cracks beneath the veneer of their existence take no time to appear (the most electrifying indicator of this, to me, is the blank stare of the doctor’s son, when he learns of the nature of death), when de facto confronted with the absurdity of it all.

Evil and suffering are very much a commonplace in the universe of Ingmar Bergman as well. But they always have human faces, being generally fluid, muddled, reversible, attributable to selfishness, no doubt, but hardly ever absolutes. Most of Bergman’s characters are either odious or fallible, pathetic and tragic, but none of them, even the proto-nazis of the Serpent’s Egg, can be seen as absolutely evil or compared to the allegorical, and inflexible, beyond-good-and-evil figures such as Death in The Seventh Seal (1957). Haneke seems to have littered his White Ribbon with such allegorical entities, profoundly un-human, zombies, almost; even the narrator, who in spite of his puffy cheeks and good intentions, brings no genuine relief whatsoever to it all. He is merely a witness, and a fairly uncomprehending one, at that, for all his eagerness to play the local detective.

But who can blame the village’s teacher? The nature of evil, and terrorism, Haneke seems to have been telling us since the dawn of his cinematic career, is coterminous with human nature, but ultimately inscrutable. In this sense, even the kind attentions of the pastor’s youngest son, who wants to cure the bird and seems always keen on doing acts of goodness, are also somehow blood curdling in their inscrutability. What is the real motivation behind the children’s actions? Ingmar Bergman’s strict upbringing and subsequent rebellion and divorce from religion and tradition led to a boisterous life of prodigious fecundity, both artistic and sexual. In many other cases, seemingly, it led to fascism. That Bergman was often referred to as a tyrant and insufferably aggressive director comes as another contradiction with the mild-mannered and soothing man others portrayed him as. This may not have been done, as the Bach music of yore, to God’s glory alone, but no doubt He alone can see the ultimate logic and truth to this mystery.

Gilbert Lely, in his biography of the Marquis de Sade, stated famously: ‘la prédication esthétique du mal exclut l’accomplissement de celui-ci’ (‘the aesthetic predication of evil excludes its realization’). In a world grown faster and maddeningly complex, with so many new faces to the predications of art and evil alike, let us point out the fact that to tell a story about our 21st century, Haneke should have used a metaphor engrained in the early twentieth century, the life and art of one of its greatest artists, and his most perfect, crystalline form to date. Through a crystal darkly, this winter light soli Deo Gloria.

Jeremi Szaniawski is a PhD student in the joint Film and Slavic Studies Program at Yale University.


[i] The film’s network of associations is rich and complex, drawing also upon works by German directors such as Edgar Reitz (Heimat), R.W. Fassbinder, Alexander Kluge, but also Frank Wedekind, the pre-war photographs of August Sander, as well as collages from the nazi period by John Heartfield (the English name of German artist Helmut Herzfeld)… The list hardly ends here.

[ii] To this one should add that the process of casting the children was a long and arduous one for Haneke, involving literally thousands of interviews. Haneke’s difficulties working with the children was, besides, among his main complaints regarding the shooting of The White Ribbon.

[iii] The only moment that I thought a little jarring here was the scene when the doctor on the horse makes a violent fall to the ground – a shot obviously digitally doctored, which ill-fits a narrative taking place in anno domini 1913. It is interesting to note the symbolism of the slain horse, also present in Haneke’s Time of the Wolf. But there is a strong ontological difference between the two pictured animal ‘deaths’, to be sure.

[iv] To many, a lesser film after the height reached by Persona (1966), but to Bergman himself, a difficult but necessary step in the right direction.