Special to Tativille: "From the bitter seas of genre cinema comes a gem! Un bijou Amer" (By Jeremi Szaniawski) 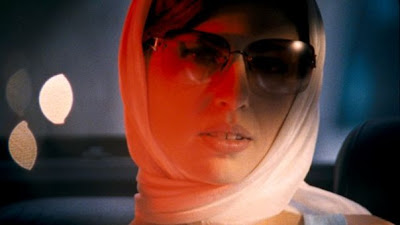 As a Belgian citizen with a passion for horror films, I could not have been more excited to find out that a film called Amer (Hélène Cattet and Bruno Forzani, 2009) was coming our way, paying homage primarily to the flamboyant universes of the Italian gialli and Japanese B movies of the 60s and 70s. After a score of festivals where it reaped overwhelmingly positive reviews, the film recently screened at Walter Reade and MoMA, ahead of its American theatrical release - and it was a great opportunity to catch it on two consecutive days, followed by a Q/A with the French (but Brussels-based) authors, Cattet and Forzani.

Amer tells the story of a woman, Ana, through three separate stages in her life: childhood, adolescence and adulthood. Each of these moments is investigated through the prism of her anxieties, growing more and more dangerous as eroticism and death become inextricably linked. While these three stages are clearly the center-pieces of the film (and feature three different actresses, all perfectly cast), the latter actually consists of seven distinct but coherent segments, with four shorter (and beautiful) moments investigating the transitions in Ana’s life. One consists of anamorphosis evoking the changes in the body from childhood to adolescence, another of curious photographic stop-motion on hairy body parts commingling with Ana’s flesh, evocative of the sexual act, before the final fragment, which I won’t reveal here, but which reconciles Eros and Thanatos more seductively than any other film I’ve seen.

One criticism one might formulate against the film is that it is ultimately nothing more than a series of sleek short films stringed together, lushly photographed and edited, but ultimately shallow and boring. But on second viewing, the film reveals its great cohesion, and the care with which the atypical script was put together strikes the viewer like a glaring ray of Riviera sunshine—it apparently took the filmmakers over a year and a half of back-and-forth rewriting before they achieved this degree of sophistication, which can indeed at first deceptively pass for a simplistic story.

The film is almost dialogue-less, but filled with a densely textured and beautiful sound mix and gloriously re-mastered musical themes by Ennio Morricone, Bruno Nicolai and Stelvio Cipriani (the latter, particularly, is used to fantastic effect in a couple key scenes of the film). A vast experiment in paying homage to a genre, Amer also revisits its aesthetics, taking the use of close-ups in giallo to a different level altogether (the majority of the film’s 900 shots are close-ups). The film overtly quotes Mario Bava, Dario Argento and Lucio Fulci, and in doing so it is akin to the cinema of Quentin Tarantino, with which it shares a kindred spirit of unabashed fan-dom for ‘base’ genres, choreographic chic and lush cinematography. Much like Tarantino’s latest installments, Amer also works through the character of the powerful and beautiful, but deadly, female character. But where the Belgian effort is more interesting than Kill Bill or Death Proof, is of course in the fact that Hélène Cattet brings a strong female subjectivity to the project, sharing it with Forzani to obtain an original mix (next to Tarantino and the Italian and Japanese B-movie authors, the filmmakers quote Claire Denis as a source of inspiration), and this is quite clear from the film’s onset, which marries the brazen forcefulness of a roaring racing car’s engine to the delicate texture of an eye ball and soft footsteps of a little girl on the wooden floors of her parents’ ominous seaside villa.

The title of the film gives away its affect and psychoanalytical implications: ‘amer’ means bitter in French, and this is the feeling that one is supposed to be left at death (‘la mort a un goût amer’ – ‘death has a bitter taste,’ claims the film’s website) but also after the film’s shocking finale. But Amer also evokes the French word ‘mère’ – mother, and ‘mer’ – the sea, and so Jung and Freud engage in a merry dance here, but never heavy-handedly so. More subtly, perhaps, Amer’s title could also be envisaged as a truncated version of ‘America’, and in many ways most of the Italian and Japanese exploitation cinema of the time was trying to emulate the success of American movies, while adding original elements of their own.

The film wants to elicit a bitter aftertaste in the viewer’s mouth, and to be sure it triggers not only sound and sight. What I found most remarkable about Amer was the sheer physical effect it produced. Forzani and Cattet, in a quick introduction to the film’s screening, explained that the film’s sound was mixed so as for the viewer to be inside the brain of the character, therefore inviting us to let go of our traditional apprehension of films through the mind, and investigating it through the five senses instead. After the film, the viewer is left with a strong somatic response, and I personally almost experienced a withdrawal when the jittering effect started wearing out, leaving me asking for more (and I do dearly hope the soundtrack to the film comes out commercially, as most of the tracks it resorts to are currently unavailable). If it’s probable that Dario Argento’s most successful films and memorable imagery were more the product of LSD (and perhaps the feminine influence of his wife and muse, Daria Nicolodi) than his own artistic talent, then Amer both elicits this effect (it summons Argento’s Inferno on the structural level as much as it visually quotes Deep Red and Suspiria in a variety of ways) while offering a positive counterpart to it – a genuine, coherent and potent ‘good trip’ of a movie.

In many ways, with its French Riviera setting and mostly French production team and cast (one of the producers and both directors are French ‘refugees’ in Belgium), one can wonder what is actually Belgian about Amer. Aside from slight hints at the surrealist school, of which of course Magritte’s country was a stronghold (the movement lasting much longer there than in France, for that matter), at one point during the episode where the mother and Ana take a walk in a small village, black, yellow and red stripes can be seen at the forefront; in other words, the colors of the Belgian flag. But Forzani told me that this was a pure coincidence. Be that as it may, the film can be envisaged as Belgian because of its unique, original and insular quality. There’s little chance any other film of the type will ever be produced, and so, like all the other successes of my country’s troubled and heroically penniless cinematography, Amer is destined to remain a prototype - which all should go enjoy on 35mm and surround sound to fully appreciate its sensuous glory.

Like all great exercises in genre cinema, the film bypasses the boundaries that it set out to pay homage to and becomes something bigger and stronger altogether, transcending its low budget in the process. Amer is, to my mind, one of the finest and most gorgeous horror films (and beyond) ever made.

Jeremi Szaniawski is currently enrolled in the PhD program in Film and Slavic studies at Yale University. He also makes horror films in his spare time.