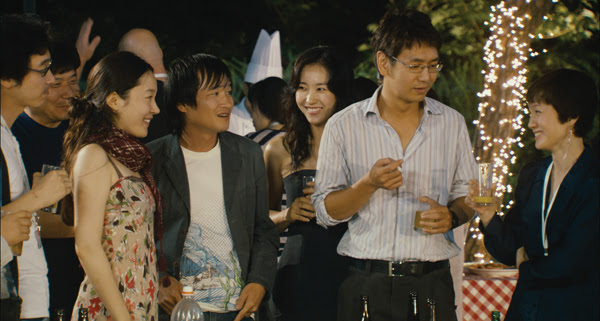 For his ninth feature Like You Know It All (2009), following the diaristic structuring and Paris setting of the filmmaker's arguably lesser Eric Rohmer-inspired previous effort, Night and Day (2008), writer-director Hong Sang-soo renews his signature diptych narrative construction in his return to his native Korea. As such, Hong lends credence to those interpretations of his work that would emphasize the cultural specificity of his divided homeland in the formulation of his stories' constructions, from The Power of Kangwon Province (1998) onward, beyond the clear and continued examination of male and female natures (within a decisively Korean cultural context, to be certain) which these same divisions often facilitate, and which as always are present in Like You Know It All. Then again, Hong's latest has lost little of the aforesaid Rohmer influence, stringing together a series of conversations, meals and rounds of drinks - especially rounds of drinks - where mostly youngish artists and students ceaselessly feel out potential romantic pairings and rehash frequently unpleasant pasts, within a precise geographical and seasonal setting. Consequently, Hong easily claims the title as the most Rohmerian of all major world directors, with a body of work that demonstrates a similar consistency - albeit at level ever so slightly below the French master's corpus. Thus, to get the verdict over presently, Like You Know It All is fairly standard work for Hong, which is to say much better than most, and quite welcome once every year or two, whether or not much has changed from the director's past efforts.

In the case of Like You Know It All, it is less a matter of outright invention than it is a synthesizing of previous works. Specifically, Like You Know It All adopts the zoom lensing of the filmmaker's A Tale of Cinema (2005) - which upon its earlier release felt well outside the main current of the director's work, but which by virtue of this latest piece now becomes far less marginal - within a series of restaurant, bar and hotel room set-pieces that are likewise found in the director's work from The Power of Kangwon Province, again, through Woman on the Beach (2006). Hong typically favors horizontally organized two-shots and multi-figure compositions throughout these scenes, thereby further crystallizing his debt to Rohmer and in particular to that director's "Comedy and Proverbs" cycle, with Summer (1986) providing a touchstone, as it was for Night and Day. From this spatial base, Hong zooms in and out, selecting subject matter from his naturally-lit, visual field. In this respect, as in A Tale of Cinema, Hong's camera figures articulate a narrational presence; the viewer sees as objects of interest are identified by the camera.

That Like You Know It All's zoom shots are paired with a narrative about a filmmaker, moreover, confirms a certain organic interrelation between form and content. More importantly, however, Hong uses his camera to convey interpersonal power dynamics throughout, whether this entails a sudden pan to exclude the filmmaker-lead Ku (Kim Tae-woo) on the edge of a multi-figure composition after his stature in the group has been eclipsed by that of a second, more famous director; or when the latter's departure from the frame and the room leads to Ku's renewed preeminence in the center of the frame - on the cusp of a drinking contest that ends rather badly. At this latter juncture, Hong holds on a doorway after the lead and two others leave the hotel room, only to show their somewhat unexpected return with a very drunk porn-star gnashing in Ku and a festival colleague's arms. Hence, Hong plays on his viewer's expectations in much the same manner as he did in his masterpiece The Power of Kangwon Province, where static set-ups were frequently procured for comic effects.

Like You Know It All in fact manages to remain quite comic throughout, whether it is in Hong's above noted manipulation of form, his narrative repetitions (such as Ku's repeated naps during the festival screenings he is set to judge), the writer-director's dialogue passages (an off-rhythm jab at a second, better-known filmmaker - "have you always been this short?" - is a personal favorite) or in Kim Tae-woo's admirably awkward embodiment of the filmmaker lead. Ku, further, represents a relatively straight instantiation of director Hong himself: he is a foreign prize-winner who always makes the same sorts of film, whether or not they are understood. And he is a filmmaker who always makes films about himself, as Ku's ex Gosun (Ko Hyun-jung) points out.

Gosun later asks for Ku's promise that he will not make a film about her, before deciding that she does not care. The fact that Ko's character does so on the sand, after her appearance alongside Kim in Woman on the Beach, suggests that Like You Know It All might thus offer an autobiographical extension of the director's experiences with the 2006 picture, in addition to its recasting of Summer's concluding set-piece sans the formation of the heterosexual couple and the psychologically clarifying 'green ray.' Hong's autobiographical reinvention of Rohmer's idiom accordingly rejects the latter's (crucial) redemptive dimension.

Like You Know It All is available on an English-subtitled, Region 3 DVD through YESASIA.
Posted by Michael J. Anderson at 6:03 PM