New Film: The Father of My Children 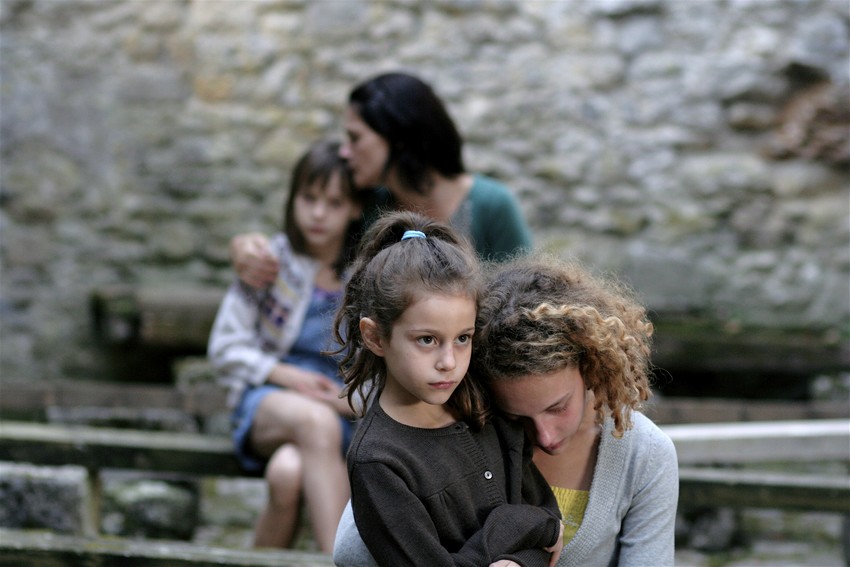 Another highpoint in an exceedingly strong year for both the French cinema and female directors, Mia Hansen-Løve's The Father of My Children (Le père de mes enfants, 2009) fictionalizes the last days of French producer Humbert Balsan's life, with his filmic equivalent Grégoire Canvel (Louis-Do de Lencquesaing) taking his own life in the midst of the meltdowns of his finances and of a Swedish-based film production modeled in part on Béla Tarr's real-life shoot of The Man from London (2007); Tarr's film in fact precipitated Balsan's actual suicide.* For the viewer aware of the Balsan-Tarr connection, The Man from London perpetually hangs over The Father of My Children as a possible hermeneutic key that nonetheless never seems to explain Balsan/Canvel's act. The Man from London more significantly provides a perfect inversion of Hansen-Løve's retelling, with the former's long-take, luminous black-and-white camera work articulated for graphic effect and generic citation foremost, whereas The Father of My Children's natural light-infused color mise-en-scène and elliptic cutting proves subordinate to its filmmaker's storytelling and her character formulations; Tarr's film is pure application of style, in other words, while Hansen-Løve's is all humanity.

The film's tenderness emerges very early in The Father of My Children, with Grégoire calling home to speak to his wife Sylvia (Chiara Caselli), following a series of work calls that Hansen-Løve combines through a conventionally Gallic, elliptical cutting schema. Sylvia puts on their two younger daughters, Valentine (Alice Gautier) and Billie (Manelle Driss), who affectionately and jokingly converse with their greatly overworked father, who though exhausted, humors and goes along with the tangents of his daughters. Later that evening, following Grégoire's citation for speeding, the same two young girls stage a play for their mother, father and oldest sister Clémence (Alice de Lencquesaing); the latter reclines and rests her head on her father's shoulder, one of many moments of physical affection. With the play's monster playfully named for Grégoire, the film's male lead responds, again in jest, with a promise that his daughters will receive the spankings of their life, which he then offers hugging and wrestling his two delighted daughters. Hansen-Løve accordingly captures the authentic, loving rapport shared by members of the close Canvel family. In this way, the late twenty-something's accomplishment converges closely with that of her early thirty-something German counterpart, Maren Ade, whose Everyone Else (2009) similarly brings the lives of its singular protagonists into vivid existence. Both female filmmakers in particular show a heightened sensitivity for the feelings of their young female women, while reserving opacity for their male leads.

Indeed, The Father of My Children is similarly aided by its sketchy depiction of Grégoire's psychology as his suicide nears. The viewer is made aware of his severe financial problems - he receives word that his assets have been frozen immediately prior to his death - which again were most recently exacerbated by the overages of his genius Swede director Stig Janson (Magne Brekke), the film's Tarr equivalent. No more motive is articulated, though it would seem clear enough that Canvel's act followed from his sense that he had no way out of his financial straights, that his career's work was all but gone, as he cautions when it is proposed that he sell his catalog. Hansen-Løve, to her credit, does not push an interpretation of an action that though opaque is easy to identify.

That he acted in the wrong becomes immediately clear, however, whether or not his despair is understandable. Yet, the writer-director does not sentimentalize the experiences of Grégoire's four female survivors, whose grief and perseverance supply the subject of the film's second part. In so doing, the director constructs her narrative to match her persevering rhetoric with the picture's focus shifting from the eponymous male patriarch halfway through, to those whom he has left behind and for whom life must go on after his departure. The Father of My Children's content organically generates its form. At the same time, Hansen-Løve does extract maximal emotion impact from the suffering of Sylvia and her young daughters, inviting an extraordinary amount of pathos for the young victims of Grégoire's action; this again is a work of extraordinary humanity.

As The Father of My Children proceeds, sans père, the female Canvel's grapple with Grégoire's death and especially their professed feelings of abandonment. Sylvia, in her husband's absence, is compelled to deal with his failing production company, and with the outfit's on-going difficulties with their Swedish auteur. Clémence, on the other hand, discovers an estranged son in her father's past, acquaints herself with one of his Central Asian filmmakers - played here by Tajik director Jamshed Usmonov - and, commensurate with her pre-adult liminality, has (presumably) her first sexual experience with another of her father's would-be young directors. His older two women, in other words, are forced to face up to his problems, while forging their own paths forward.

The Father of My Children thereby inscribes life's continuation after tragedy, the necessity of perseverance after human loss. To this end, Hansen-Løve's film continues to abound with singular, life-filled moments even as the family continues to mourn, as for instance when a sudden power outage forces the women and family friend Serge (Eric Elmosnino) out onto a city street, or when the younger girls insistently greet the workers at the now liquidated production company, before play-acting and searching through their mother's workspace. In the scene to follow, The Father of My Children closes as it has opened, with compositions of the Parisian streets cut with an upbeat musical refrain that serves as the film's literal epitaph: "que sera sera."

Correction [*]: Writing for the Village Voice, Ella Taylor suggests the director is meant to invoke Lars von Trier and the production was his Manderlay (2005), even though other, earlier reviewers and interviewers have also suggested The Man from London as the source, as I have in this piece; in many respects von Trier's anti-humanism provides as compelling a counterpoint to Hansen-Løve's work as does Tarr's formalism. Perhaps then it would be more accurate to say that "Saturn" is a composite of these two productions.
Posted by Michael J. Anderson at 11:13 PM

Hello again Michael. I'm with you on this one, too. A lovely film. I had no idea watching it that it was in any way inspired by something that really occured, but during that scene where he travels out to meet with the Swedish filmmaker I thought allusions to Lars von Trier were pretty strong indeed. Something about his personality perhaps. Factually, Tarr and The Man From London add up better, though. Anyway, far more important is what you discuss afterwards, the humanity. It's so intelligently handled, no terrible mawkishness for instance. Just last night I watched Assayas' Late August, Early September and it too has that transcendent feeling of life moving along as it does, and it features tragedy also. I know he and Hansen-Løve are engaged (maybe married now?) and I wonder if he's somehow influenced her work. I'm sure you've noticed the similarities to Summer Hours here, but the film production milieu also reminds of Irma Vep but without all the bizarre happenings.