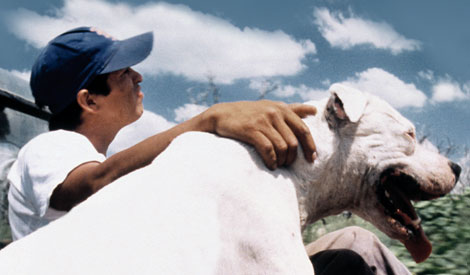 Receiving its New York premiere this past weekend in conjunction with the just-completed 2010 Robert Flaherty Seminar, Argentine filmmaker Lisandro Alonso's La libertad (2001), the 1975-born director's first feature, provided a fit course for international modernist art cinema in the years immediately following the Abbas Kiarostami-dominated 1990s. With Kiarostami redrawing the boundaries delimiting fact and fiction from Close-Up (1990) onward, La libertad emerges as a sensible extension of the aforesaid's ontological interest, providing a work that is properly speaking neither fiction feature nor documentary. La libertad's grounding in the factual - its non-professional lead performs actions belonging to his daily ritual - insures that this is not fiction filmmaking as it is conventionally defined, while the film's lack of explanation equally argues against its status as documentary. If anything, La libertad suggests a form of semi-fictionalized cinema that is separated from more traditional fiction film by the gulf of non-fiction; in specifying so little, La libertad becomes something other than the non-fiction that a description of its scenario might suggest otherwise.

After the black and red credits and heavy industrial-style scoring that have since become a discordant signature of Alonso's, La libertad opens on Misael Saavedra as he performs the tasks of a lumberjack: the young male fells trees, stripping the bark off the dead trunks with his forearms pulled tight as he flicks the steel blade against the thin outer layer. The viewer can almost feel the vibrations of the axe handle that accompany the thud of the blade as it catches in the thick trunk. Alonso's camera remains fixed on Misael, often in longer compositions and extended duration takes, as he repeats the same practice on a number of the locale's leafless trees, both fallen and standing, before leaving for the shade of his camp and a meal from an iron pot. Once he finishes, pushing the remnants of his lunch back into the same pot, Misael leaves his shaded exterior, covered by a sheet metal roof that also provides its waist-high fencing, the film's subject lies in the dark of his exposed bedroom with his gaze directed outside his makeshift hut.

At this juncture, Alonso's camera peels off from his lead, moving independently to a wire fence that closes off an adjacent field. As such, Alonso intimates the presence of his own narrational position within the film, separating subject from apparatus for the remaining duration of the take. Upon the conclusion of this visual diversion, Alonso returns to Misael who subsequently meets a man and his son after they pull up in an empty pickup truck. After loading the flatbed, Misael rides on the bare logs, with his hand resting on the neck of a panting dog. Throughout this sequence, Alonso awakens his viewer's sensory memory, calling to mind the smooth textures of the logs covered in fine sawdust, the warmth of the animal's neck and its angular shoulder bones. In this way, La libertad prefigures Alonso's outstanding recent Liverpool (2008).

Ultimately, Misael continues on alone in the truck, finally reaching a rural lumberyard where he sells the object of his work - below the price that he seeks initially. Having concluded his sale, he purchases gas and supplies at a petrol station, before returning finally to the same improvised homestead. Building a large bonfire, Misael sits staring into the camera - thus again enunciating the film's apparatus - which accordingly reenacts the shot that opened the film before the loose narration commences in earnest with the lead's work. In this respect, Alonso invites the viewer to consider the film's depiction of work as routine, as a repeated set of gestures carried out before the film begins and after the picture concludes. Here again Liverpool comes to mind.

In total, La libertad constitutes a form of cinematic portraiture, procuring an abundant sense of Misael's daily life, featuring not simply the actions performed on the job - though this does constitute the majority of the film as it would presumably Misael's waking life - but also the tactile sensations of these experiences and even those acts that are typically elided from feature and documentary filmmaking alike, whether it is riding in and driving the truck, preparing his meal (including his very ethnographic butchering of an armadillo, a scene that is essentially replayed in his masterpiece Los Muertos; 2004) or even defecating as he crouches toward the bottom of the frame. In this latter instance, the viewer hears though does not see said act, which Misael prepares for by clutching sheets of tissue paper in his fist. La libertad in sum seeks to comprehensively portray what Misael's life is like as he lives alone in the film's isolated rural setting. 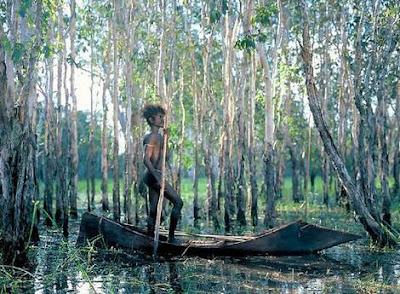 Indeed, it may just be the solitary character of Misael's existence that provides the film with its most distinctive quality. The great majority of Alonso's seventy-three minute feature frames Alonso alone, where, save for his singing of a single song, he remains silent. The film itself, though it features an abundant ambient soundtrack, which attracts the viewer's attention as much as does the image track, likewise trades on Misael's silence, with the additional exception of the passages at his homestead where he turns on his hand-held radio. Alonso thusly identifies the experience of being alone as a silent one, where the viewer gradually becomes aware of Misael's lack of speech and the need for communication that will manifest itself in his moments spent listening to his radio, his brief conversation with the gas station worker, a phone call to a friend and even to his song declaimed as he crosses the field in late afternoon.
By comparison, writer-director Rolf de Heer's Ten Canoes (2006), co-directed by Peter Djigirr, which like La libertad premiered in the Un Certain Regard section of the Cannes film festival, abounds with speech, featuring a voice-over in English depicting the events occurring in not one but two pasts of increasing remoteness from the opening's present. In the first of these historical settings, an on-screen narrator (David Gulpilil) tells the same extra-diegetically told story in Aborigine to his fellow tribesman (Jamie Gulpilil), whom he suspects of coveting his wife. The story told on-screen is intended therefore as a parable for the young man, with the same actor playing his earlier, covetous counterpart. As Ten Canoes proceeds in its telling of this story, the filmmakers frequently shift between the film's two pasts and at times even the present, featuring black-and-white for the earlier past and color for the both the present and more frequently the distant past. While there is an inelegance to de Heer and company's visual choice in this respect, their strategy does at least insure maximum intelligibly. Indeed, Ten Canoes' non-sequential narrative structure is not adopted to disorient the film's spectators.

Rather, de Heer and his fellow filmmakers utilize multiple temporalities in order to provide a historical framework for the stories being told. Specifically, Ten Canoes pursues a form for the representation of its Aboriginal people's oral history, in this case literally passed down from the past depicted in the black-and-white to the present, with narrators at both historical stages sharing the same story. In this regard, Ten Canoes represents a remaking of film language no less than does La libertad's poetic sub-documentary narrative minimality, through a form of incessant narration that almost completely eschews mimesis (the act of showing rather than telling); in this sense it is the very opposite of La libertad that shows everything and provides no commentary. Instead, de Heer and company's film uses its image track to illustrate both the story being told twice - a mark of another major direction in twenty-first century modernist art cinema, as instantiated by the works of Hong Sang-soo and Apichatpong Weerasethakul - and also the ethnographic details, the spectacle articulated by the off-screen narrator that emerge throughout the goose egg hunt on which the on-screen narrator shares the film's oral history.
Posted by Michael J. Anderson at 9:06 PM