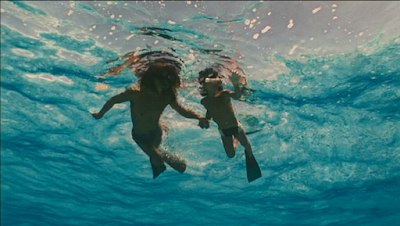 Writer-director Pedro González-Rubio's Alamar (To the Sea, 2009), one of the past year's unequivocal festival-circuit breakthroughs, pursues the same unmarked path between documentary and fiction as another of these writers' favorite 2010 New York premieres, Lisandro Alonso's La libertad (2001). In González-Rubio's seventy-three minute feature, as in Alonso's similarly undersized debut, the narrative focuses upon the rituals of its non-fiction leads within a rural Latin American backwater. Unlike in La libertad, however, which Alonso grounds in his protagonist's work environment, Alamar centers on Jorge Machado (as himself) as he travels on holiday with his young son Natan Machado Palombini to the Chinchorro-reef Caribbean home of his father, played by Nestór Marín. Hence, Alamar presents its human subjects, save for the grandfather, in a world that is removed from their typical daily habits, though Jorge is clearly conversant with his father's routine. Alamar thusly concerns itself within an exceptional moment in the lives of father Jorge and son Natan, as they vacation together before the latter returns to be with his mother in Rome - and even of Nestór as he receives his absent son and grandson - rather than with the everyday monotony that characterizes La libertad.

Indeed, it is Alamar's externally imposed spatio-temporal unity - its holiday, or idyll structure - that lends it a sense of fictionality. However, the events contained within these loose narrative boundaries seem to unfold with a kind of naturalistic grace that feels entirely unconstrained. While La libertad consciously privileges the messier, more elemental aspects of man's relationship with nature, positioning itself at the mythical apotheosis of neo-realism, Alamar strips away the rough edges of subsistence living, creating the kind of shimmering, romantic lyricism that Robert Flaherty sought among the natives in Nanook of the North (1922). Not coincidentally, then, La libertad, despite its eminent naturalism, somehow feels more fictional than Alamar's Edenic ethnography.

If Alamar therefore injects less ambiguity into the relation that it procures between fiction and non-fiction, it nevertheless captures its real-world spaces not in conventional 16 or 35mm, but in a DV that ratchets up the film's gorgeous sea-green waters and pink sunsets to an almost preternatural degree. González-Rubio's intense daylight features significant bleaching, thereby providing a canvas upon which the circling scavenger birds appear about as real as the namesakes of Alfred Hitchcock's The Birds (1963). The director's camera work likewise follows its leads as they take their trade underwater, capturing the vibrant, undersea life of the world's second largest coral reef. As Michael Mann's Miami Vice (2006) and Nuri Bilge Ceylan's Climates (2006) have before it, Alamar's breathtaking vistas reveal the digital cinema's unique, medium-specific capacity to exquisitely render both sea and sky in a profusion of vivid color and fine-grained detail that seems almost on occasion to exceed the real.

If the film's landscapes provide a poetical excess of beauty, its representation of the process of fishing endows an often painstaking and patience-trying trade with a fantastic sense of ease and pleasure. In Alamar's magical realist universe, each cast of the fishing line almost instantly brings in a gleaming, exotic fish, just as every dive concludes with a ruddy, oversize lobster. The fruits of the catch invariably provide rustic cuisine of the highest order, which again is very different from the pot that La libertad's lead returns to daily, or to the armadillo from which he gleans a very perfunctory meal. In this respect, as in the film's varying depictions of labor - Alonso's film discloses nothing if not the banal details of its lead's very small-scale logging operation - Alamar proves to be an almost anti-La libertad, despite the two films' immediate similarities. Where the earlier work emphasizes the labor performed by its subject, thereby proving ceaselessly ordinary, however novel it may be to many viewers, the later is anything but, erasing the hardships of the work in a world that verges on becoming fantastic. In other words, while the Sisyphean labors of the La libertad's man-in-nature come to take on a mythic cast, Alamar presents a kind of ultra-masculine fairy-tale.

To this latter end, the film's trio occupies a home constructed on stilts over the turquoise water, with a crocodile circling beneath the structure in search of scraps. (In a moment reminiscent of film theorist André Bazin's description of the danger posed to a child in the 1951 British film, Where No Vultures Fly, Natan does get perilously close to a crocodile at one point, with the child's father and grandfather causally, laughingly warning the young boy as they sand their gleaming white boat at the water's edge.) An ibis that they nickname "blanquita" not only visits their home repeatedly, becoming something of an ersatz pet to the child, but is even trained by Jorge to wait patiently for a handful of food. There is something perfect about the world they construct apart for these two weeks; the film very much veils itself in their fond recollections of the vacation.

Of course, Alamar does depict a very transient moment in their lives, before they will once again separate, with the child returning to his mother in Italy. (The film opens with black-and-white footage and then voiced-off stills that detail the family's current estrangement.) Jorge has a very small amount of time with his son, which he makes the most of by tenderly holding the seasick child on his lap as they first travel to the house on the sea and when they wrestle under the hammocks that they sleep on nightly. If Alamar does offer a sort of paradise for the film's three male generations, it is a momentary one only, one that will conclude before the film's seventy-three minutes.
The writers of this piece would like to thank R. Emmet Sweeney especially for his strong and insistent recommendations of both Alamar and La libertad.
Posted by Michael J. Anderson at 11:26 AM

Wow , Sounds a great film , Thanks Michael for doing a great review of the film.