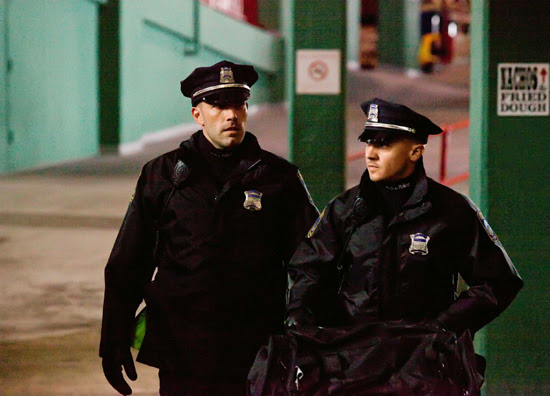 Ben Affleck's The Town, from an Affleck, Peter Craig and Aaron Stockard adaptation of Chuck Hogan's novel "Prince of Thieves," distinguishes itself from Hollywood's comparatively recent set of Bostonian Irish mafia A-pictures, Clint Eastwood's late-period masterwork Mystic River (2003) and Martin Scorsese's Academy-endorsed, nihilistic divertissement The Departed (2006), through its exceedingly precise rendering of its Charlestown setting.  Affleck registers the once predominately working class redbrick district through a series of aerial takes that frequently juxtapose the North Boston neighborhood in the lower foreground against the city center receding behind Christian Menn's Bunker Hill Bridge, and in a series of depressed and depressing locations that include abandoned ice arenas, gravel pits and housing projects.  Indeed, The Town proves fundamentally geographic in its orientation and its intention, sketching the neighborhood and its parasitic relationship to Greater Boston (as the point of origin for a nationally unparalleled population of armored vehicle and bank robbers).  On the most basic level, the multi-hyphenate's latest suggests a filmmaker working to stake his claim as the Boston auteur, forging a body of work that attempts to procure a robust sense of the city, from Gus Van Sant's Good Will Hunting (1997),  through to Affleck's own Boston-based policier Gone Baby Gone (2007) and his 2010 latest.  Affleck may yet prove a New England parallel to Gotham's Scorsese, albeit in a very nascent stage in his career; or more conservatively, he may become to his hometown what Paul Mazursky, whose An Unmarried Woman (1978) mapped New York far better than most, once was to his.

Ultimately, what Affleck presents is his city's myths, in this case Charlestown's criminal disrepute, which the director filters through an exceedingly familiar moral relativism.  His city's thieves, even those who enjoy their line's brutality (Jeremy Renner), are naturally never without positive qualities (with loyalty being the default).  If The Town is therefore highly conventional in the moral code it depicts, so too is the tenor of the film's narrative focalization, with the spectator heavily invested in the fate of Affleck's bank robber cum kidnapper Doug MacRay.  In the director's hands, the potential imminent revelation of Renner's neck tattoo offers a virtually Hitchcockian example of suspense, equivalent in effect to Sabotage's (1936) public transport explosive, with Doug's freedom and romantic happiness perilously hanging in the balance.  In the end, however, Affleck opts to insure only one of these two for his MacRay, leaving the second open to speculation in a concluding set-piece that seems to be lifted directly from Frank Darabont's The Shawshank Redemption (1994).   That Affleck would favor such a source at this pivotal moment reinforces his own ambitions with The Town: to create a well-crafted piece of A-picture storytelling (of the sort that would largely disappear in the early 2000s, save for an occasional Mystic River).  In other words, Affleck produces a largely edge-less work of the middle, where the director's able regulation of pace and his fine direction of actors - extending beyond those mentioned to a plausibly 'rode hard and put away wet' Blake Lively; her Oxycon-abusing, Irish-American single mother proves the ideal role for the alluring young starlet's overbite - remain its most memorable virtues.  Other that is than the film's urban geography.
Posted by Michael J. Anderson at 12:37 AM