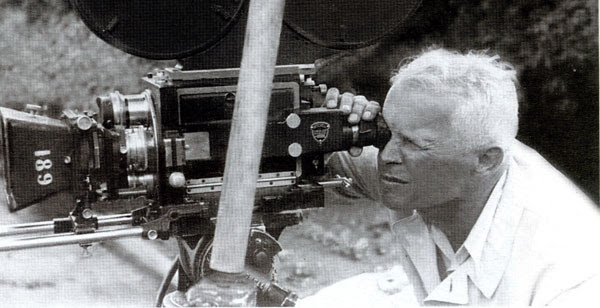 Kozintsev’s short is representative of the Soviet wartime genre, boevoi kinosbornik, a thematic compilation of short films. Once at Night, made in Alma Ata, Kazakhstan at the evacuated Mosfilm studio, was released as a part of Boevoi Kinosbornik No.2 entitled Our Girls and dedicated to the courageous Soviet women. The film was paired with Abram Room’s short Tonia, which showed a sacrifice of a woman. In a suspenseful yet comedic manner, Kozintsev, faithful to the avant-garde roots of his earlier ‘eccentric’ works, tells a story of Nadia Shilova, a young and naïve veterinarian (played by a hilarious Nina Petropavlovskaya), who encounters two soldiers, one of whom is supposed to be a German spy and saboteur. Nadia identifies the enemy between her two visitors by declaring that she put poison in their tea. The atmosphere of duplicity, fear and doubt is masterfully captured by the camera of Andrei Moskvin, who two years later worked on Sergei Eisenstein’s magnum opus Ivan the Terrible. Despite being set in the time of war and dealing with the controversial subject of war treason, Once at Night is delightfully thrilling and somewhat inappropriately funny. Due to the formal and narrative ambiguity of both Kozintzev’s film and Room’s Tonia, Boevoi Kinosbornik No.2 was banned by Stalinist censors and was not released until the Thaw.

Ukraine in Flames is Dovzhenko’s first WWII documentary. The film’s central story is the Battles of Kharkov, put into the context of Ukrainian history and the excruciating struggle of its people during the war. Compiled out of documentary footage made by more than a dozen cameramen as well as German newsreels, Ukraine in Flames presents a powerful montage of Nazi atrocities and its toll on the filmmaker’s native soil. While Dovzhenko’s wife Yuliya Solntseva and filmmaker Yakov Adveenko were credited as directors of the film, Dovzhenko, who worked as a war correspondent for the Izvestia newspaper at that time, authored a passionate and didactic (if at times clichéd) text to accompany the images (narration by voice-over actor Leonid Khmara). Dovzhenko’s poetic sensibility shines through the Russian language narrative with the quotations from Ukrainian poet Taras Shevchenko, folk songs, and heartbreaking testimonies of Ukrainian villagers and partisans (in Ukrainian). The tragedy of the war is both universal and personal for Dovzhenko: he cannot stay indifferent to the struggle of his country, whose history and beauty he so lovingly glorified in his celebrated masterpieces Earth (1930) and Zvenigora (1928). Like many Soviet films of the war era, Ukraine in Flames was made as a cry for help to the rest of world. In his diary, Dovzhenko wrote: “Yuliya and I are working on this film that is addressed more to the world rather than our own audience.” The film was a success in the Soviet Union as well as abroad, where it was shown in 27 countries.

Ukraine in Flames will be screening courtesy of the Ukrainian Film Club of Columbia University, the only permanent forum of Ukrainian film in North America since 2004.
Posted by Michael J. Anderson at 11:10 AM