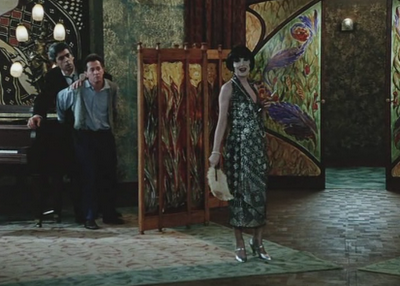 Manoel de Oliveira's fundamentally experimental Mon cas (1986), from the filmmaker's adaption of José Régio's play "O Meu Caso," with additional dialogue excerpted from Samuel Beckett's "Pour Finir et Autres Foirades" and the Biblical "Book of Job," orchestrates the same stage performance three times, first as filmed theatre (pictured), then in silent black-and-white, and finally as imperfectly dubbed sound cinema. In each of the repetitions, Luís Miguel Cintra precedes Bulle Ogier's actress onto the proscenium, intruding on stage with the intention of stating his "case" to the audience just as the latter is about to commence with her performance. Oliveira follows these three takes with a contemporary re-staging of the Job narrative in the midst of a contemporary urban wasteland that is no less artificial and theatrical in its stagecraft. Beyond recapitulating the filmed theatre of the opening stanza, the fourth provides an additional variation as it likewise adds to Cintra's 'case,' expanding especially upon the documentation of gross human suffering that appears explicitly during part three (on a film screen in the rear of the stage; among the most indelible images are those of bodies disfigured by the famine then contemporary to the Horn of Africa). Mon cas's 'case' accordingly poses the theodicean questions of Job in this earlier segment as well, thereby offering another interruption of the bourgeois entertainment that Ogier and her fellow players are attempting to provide. Oliveira indeed insists on an engaged art, in the manner of Picasso's "Guernica" (1937), which the director introduces in a pointed in-film reference, as opposed to the frivolous, light comedic fare that Ogier begins to annunciate early in part one.

Oliveira directly precedes the first part - which he marks with the on-screen snapping of a clapper and the words, "Mon cas, first repetition" - with long shots of an auditorium filling around a camera and crew. The filmmaker focuses attention on what shortly will become the space behind the camera, with Oliveira drawing an analogy between theatrical audiences and those persons who watch the filmed performances from behind the camera; or, more precisely, Oliveira reminds his viewer that film actors likewise play to real people in a manner comparable to the theatre actor. Cinema, in other words, is revealed to share more with theatre than arguments for the two arts' inherent specificities commonly concede - an opinion that Oliveira has articulated throughout his work, as for instance in the concluding passage of his sublime I'm Going Home (2001). Moreover, Oliveira's filmed theatre feels the most like the cinema of its present day, thanks to its comparative lack of technical limitations that mark parts two as silent (lack of sound save for the voiced-off monologue, sped-up footage) and three as classical sound (overdubbed, with an exaggerating echoing effect to emphasis the sound of a second space housing the recording equipment). That is, cinema becomes most recognizable here when it is at its most theatrical; Oliveira's thesis is, as always for this writer, more compelling than it would appear at first glance.

If parts two and three therefore mark a progression out of the theatre, first to silent and then to sound cinema, part four implies both cinema's passage into a modernist phase, and also a form of regression to a much earlier (passion-play, or even oral history) mode - not that an exploration of pre-modern sources is any way inimical to modernism. This progression does not occur by virtue of formal inscription, however, but rather by dint of artistic self-reference, as a symbolic continuation of the cinematic history that Oliveira's career likewise instantiates. (In this sense, Mon cas prefigures the director's most recent effort at cinematic history/autobiography, 2010's The Strange Case of Angélica.) That is, part one also suggests Oliveira's own adolescent, pre-cinematic artistic passion: the stage. Part two similarly depicts not only cinema's silent start, but Oliveira's as well, with the filmmaker's silent Douro, Faina Fluvial (1931) his first effort in the medium. Part three consequently inscribes both classical sound cinema and also Oliveira's lone offering in this mode, Aniki-Bóbó (1942), which like Mon cas's third part, presents theatrical performances before real-world backgrounds (though as open-air theatre rather than through a substitute for rear-projection footage). Lastly, Oliveira's Biblical fourth part suggests not only a post-classical phase of cinematic modernism in its self-reflexive, artifice-laden updating of the Job text, but also the director's specific post-Aniki-Bóbó move into this mode with Acto de Primavera, the filmmaker's equally self-reflexive 1963 staging of a passion-play. In the case of part four, it is only through an awareness of this particular point of self-reference, of the Biblical play as a threshold for modernist practice in Oliveira's work - given the degree to which Mon cas proves Brechtian avant la lettre otherwise - that the completion of Oliveira's personal cinematic history registers.

Posted by Michael J. Anderson at 1:07 AM

I couldn't agree more with your reflections here, Michael. But for me the impact of the whole thing comes down to an emphasis on the language, most especially (and not surprisingly) in the final sequence. That was bracing because, even though I already had a deep interest in biblical literature and language, the effect of seeing it presented in this fashion and given the proper space to play out was truly stunning. The way in which the Job sequence complements and reflects the previous parts is really another subject entirely and belongs to what you are doing here, analyzing the whole. But, once again, for me it's that duration and form that marks this sequence out as the singular and powerfully rich thing it is.

Luis Miguel Cintra is, of course, perfect for this very antique theatrical presentational style of pronouncement and proclamation. Cintra is really more of an orator than an actor and that's not meant as criticism at all (he does variations on this in virtually all Oliveira's films to one degree or another--from Don Rodrigue in The Satin Slipper to Father Antonio Vieira in Word and Utopia; the cameo he has reciting Pessoa in Eccentricities is great because it's almost a bald acknowledgment of who and what he is--his function or role in all the texts).

I have to tell you that the first time I heard the Job section here (and I don't consider myself unfamiliar with that material at all) I was quite simply blown away by the extraordinary effectiveness of Oliveira's self-consciously antique approach to the presentation. It's self-conscious without that being degenerative in some post-modern sense of arbitrary intellectual remove or qualification. I really hope that this whole sequence is the model Oliveira uses for his proposed Quixote adaptation in the style of Gustave Moreau.

By the way, how did you read the final scene--most specifically the re-establishment of Job's family and fortunes presented to us within that particular backdropped environment (it's a reference to Ritratto di Citta Ideale by Laurana, I think)? Why that and especially why that in relationship to the imposition of more modern theatrical artifice during the same scene and given all that has come before? Or is the reason self-evident?

Thank you for your wonderful comments as always, Nathaniel. They are far more interesting than the very cursory job I did with the film; I was beginning to feel the guilt of failing to post.

I am fairly certain that you're correct in identifying the reference. My immediate thinking would be that the set-piece possesses a duplicate meaning: as both the source of the modern-era - with the contemporary set-craft representing its final stage; and as an obvious metonymy for the rebirth of the Job narrative. I am certain that there is far more that I am either overlooking or of which I am unaware.