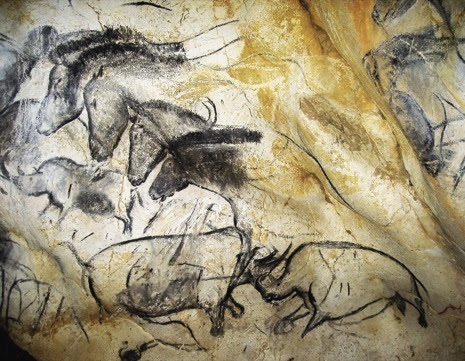 To add to an already thundering chorus, Werner Herzog's Cave of Forgotten Dreams (2010) represents one of the more subtle, successful and indeed suitable applications of 3-D technology amid the current rebirth of the spectacle-oriented form: utilizing the augmented medium's palpable depth-of-field and tapping into its higher capacity to articulate volume, Cave of Forgotten Dreams conveys a feeling of the enclosed space's supreme vertical restrictions, while tracing the ample 30,000-year-old figures as they spread across the rippling stone. Though even in two dimensions it would  be possible to glean the genuine beauty of the Chauvet cave's nascent human representations - art attained a level of substantial accomplishment, it would seem, very early in its development, not unlike the point that cinema reached in the work of Auguste and Louis Lumière - the picture's powerful immersive impression, its admirable elucidation of one of the world's most singular places, in both its boneyard present and its proto-cinematic past, would wane without the technology's third dimension. Yet, even with this appropriately organic expansion of film form, Herzog understands that his art remains an experientially limited object as his non-fiction narrative sharply shifts momentarily to a master perfumer who processes the restricted setting through his prodigious sense of smell.

Cave of Forgotten Dreams sustains its self-reflexive spotlight on the cinematic art form through the picture's concluding passage, whether it is the director's early apology for his crew's presence in the frame or Herzog's citation of movement within and over the interior's multiple iterations of animal form. Indeed, the discovery of a vaginal figure occasions both comparisons between the libidinal end of cave painting and motion picture representation, while affording Herzog the opportunity of procuring a pornographic form of suspense in the lead-up to his graphic reveal. However, it is in the aforementioned closing scene, the film's "Postscript," where Herzog's self-consciousness becomes most conspicuous and cloying, as the director speculates on the mind of a mutated albino crocodile in his own signature manner - one it should be added that has long since become an irritating elite-pop culture cliché. Herzog's ravings burst the beautiful spell cast by the film's incantatory Chauvet setting. Though it is a misstep surely, an "unforced error" in the words of film scholar Lisa K. Broad, it is a strategy, nevertheless, that issues from the film's internal logic: Herzog's characteristically unhinged warning doubles the crooked little finger of art history's earliest auteur.

Cave of Forgotten Dreams accordingly joins fellow 2010 alum, Apichatpong Weerasethakul's Uncle Boonmee Who Can Recall His Lives, in detecting the origins of the cinematic medium within humankind's oldest form of artistic expression. The latter work, last year's best, will be presented May 22nd as part of the New York-based Asia Society's "Blissfully Thai" series (with Thailand's finest filmmaker scheduled to participate in a Q&A session following the screening of his dense masterpiece). Last night, "Blissfully Thai" opened with a screening from the second leading figure of the Thai art cinema, both in international reputation and on the level of artistic achievement, Pen-ek Ratanaruang. The rarely-presented Ploy (2007), from a screenplay by the director, finds Pen-ek working at approximately the same higher level of artistry that the filmmaker displayed previously in major-works 6ixtynin9 (1999) and Last Life in the Universe (2003) - and in formal territory that is familiar equally to both. In Ploy, as in Last Life in particular, Pen-ek belatedly suffuses an undifferentiated dream surreality within what had appeared an objective, existential present; the Pratt Institute-educated Pen-ek, like the "exquisite corpse" work of his Art Institute-trained countryman Apichatpong, borrows substantially from the West's Surrealist tradition. In thus subverting waking reality, Pen-ek manages to navigate generic registers, in the memorable pattern of 6ixtynin9, transforming Ploy over time (and from set-piece to set-piece) from marital melodrama to soft-core romance to serial-killer thriller.

Ploy's surreal strategies likewise register the picture's broader attempt to manufacture the liminal experience of "jet-lag" shared by the film's married travelers. With Ploy's narrative largely confined to a Thai hotel in the hours immediately before and after daybreak, Pen-ek adeptly instantiates the muddled cognition of the moment; Ploy provides a crystalline portrait of sleep deprivation at dawn, when the bright white light of the early morning sun suddenly begins to blaze below a set of bulky hotel curtains. Pen-ek's work is no less infused with erotic feeling, with Apinya Sakuljaroensuk's eponymous nineteen year-old the primary conduit for the film's inscribed, very palpable heterosexual desire - even as its most explicit sexual encounters prove the products of Ploy's subjectivity. While further correspondences to Apichatpong and Tsai Ming-liang's Goodbye Dragon Inn (2003) obtain in the hotel's corridors especially, Ploy herself seems to suggest foremost the reincarnated presence of Faye Wong in Wong Kar-wai's Chungking Express (1994), with a pointed allusion to the expiration date of a romance a strong confirmation of the reference. Indeed, Wong, as scholar Broad has noted likewise, offers a valuable point-of-comparison for the highly achieved, if more middle-range art-cum-entertainment cinema of Pen-ek.
Posted by Michael J. Anderson at 7:50 PM