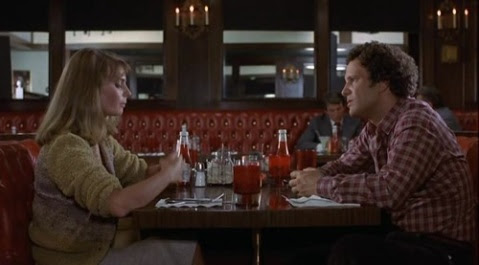 Having celebrated the thirtieth anniversary of its release this past March, Albert Brooks's minor masterpiece Modern Romance (1981, Columbia) remains perhaps the definitive post-classical era reinvention of the Comedy of Remarriage, even if its marital restoration is nothing more than hinted at as a future possibility in the third of the picture's three concluding comedic titles. In fact, the film's literal marriage likewise appears only in this same set of on-screen updates, with the divorce following one month later - as is stipulated in title number two. Modern Romance accordingly plays as a slightly displaced, contemporary revision of the classical form, whereby the couple's break-up (that is, Brooks's Hebraic Robert Cole and Kathryn Harrold's W.A.S.P. Mary Harvard's) stands in for the sub-genre's defining marital split; their subsequent on-screen reunion - and retreat into California's Connecticut equivalent, Idyllwild - consequently marks marriage two and a second Midsummer's honeymoon. That their second on-screen tour as a couple - one of many the viewer presumes - ends in yet another split, however, gives lie, or at least modernizes the sanctifying break-up and reunion template of the studio period Comedy of Remarriage. In Brooks's later incarnation, the Catholic-coded faith that Cary Grant  finally develops in ex-wife Irene Dunne within The Awful Truth (Leo McCarey; 1937, Columbia) never seems to materialize.

Brooks's inveterately suspicious Cole displays a no more flattering indecisiveness, revealing itself primarily in Cole's unending stream of break-neck reversals. Throughout Modern Romance, Brooks's Cole immediately follows basically optimistic declarations with pessimistic about-faces, whether in conversation with his assistant film editor Jay (Bruno Kirby) or as he monologues ceaselessly at home. The latter passages not only serve to reflect Robert's discomfort in being on his own - while, of course, also facilitating Brooks's unique, especially verbal comedic style - but they additionally set up one of the screen's most excessively deferred punch-lines (outdoing even the strategy's greatest exponent Jacques Tati): when Cole thereafter picks up a date in his ubiquitous sports car, the two sit silently in his front seat as they set out for dinner. His verbal torrent, as such, has stopped, thereby transforming the aforementioned passages of verbosity into an elaborate set-up for the pair's awkward, wordless drive. Robert consequently pulls back in front of his date's apartment complex - changing, or perhaps more accurately, making up his mind - without another word, until he confesses to being unprepared to re-enter the dating world.

Brooks's characterization ultimately proves both courageous and commendable in the very lack of positive values bestowed by the writer-director - and especially in Brooks's willingness to eschew facile growth for his protagonist Robert. Brooks, likewise, does not permit himself scenes in which he is able to demonstrate an intellectual superiority to augment his lack of moral or interpersonal intelligence, save perhaps for his encounters with James L. Brooks's director. (James L. is directing a George Kennedy science-fiction vehicle that that provides the negative image of the Albert's real-world take on contemporary romance.) In these exchanges, film editor Robert possesses the practical common sense that the filmmaker lacks, thus endowing the former with an inherent superiority. Then again, as James L. Brooks's character shares Albert's real-life directorial professional, this apparent break with the picture's character strategies in reality provides another instance of the writer-director-actor's self-deprecating humor. Robert is never really allowed to be in the right, except when it means that the film's director is acting irrationally. The Albert Brooks of Modern Romance accordingly emerges as the most singularly self-critical hyphenated screen persona this side of Clint Eastwood's Harry Callahan recasting in Sudden Impact (1983, Warner Bros.).

Modern Romance shares further qualities with those of the actor-director's corpus.  For one, Brooks's film represents a commensurate attempt to grapple with its historical moment. (At the time of this writing, Brooks has just authored his first novel, 2030: The Real Story of What Happens to America, extending this strategy within the current debt crisis.) In the case of Modern Romance, this effort crystallizes in the fundamental, intrinsically contemporary flaw that continuously destroys Robert and Mary's relationship: that they, two work-oriented professionals in separate industries - unlike His Girl Friday's (Howard Hawks; 1940, Columbia) newspaper man and woman - have nothing in common. Second, the very fact that Brooks attempts to remake a 1930s-era battle-of-the-sexes generic archetype shares with Eastwood's recent efforts to renew the screwball form in The Gauntlet (1977, Warner Bros.) and Bronco Billy (1980, Warner Bros.). Brooks's film is no less than saturated in both Hollywood's past and in the workings of its post-studio present.

Finally, and most notably of all, Brooks utilizes a classical shooting strategy that like his compatriot only rarely shows markers of post-classical, intensified forms of continuity. In Modern Romance, Brooks always seems to cut unobtrusively on rhythm. The director introduces spaces through mobile establishing shots that segue into medium two's, which themselves become over-the-shoulder shots and their reverses. When Brooks does experiment with telephoto lensing - when Robert decides to get in shape on an outdoor track - the technique is utilized so that Brooks is able to run toward the camera, before peeling off in the direction of a nearby phone booth in a moment of characteristic reversal. In other words, when Brooks varies his formal strategies, as he does in this instance, the result is a visual joke; film style is placed in the service of comedy in Brooks's comparatively classical (post-classical) disassembling of the Comedy of Remarriage. In spirit at least, Brooks, like Eastwood, belongs to classical Hollywood's immediate aftermath - rather than to the afterglow of New Hollywood. Despite Brooks's Heaven's Gate punchline (Michael Cimino; 1980, United Artists).