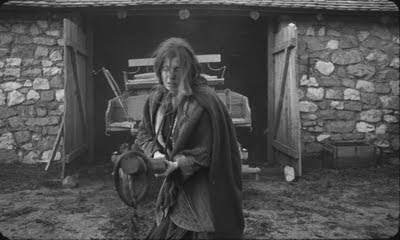 Longtime Tativille readers will know that this site sees very little action this time of year, and that it officially has remained a one-man endeavor since its inception in 2005. Well, both of the above are about to change. As to the latter, let me be the first to welcome long-time collaborator, Mrs. Tativille Lisa K. Broad (pictured - okay, perhaps not... sorry Lisa), as Tativille's latest "contributor," just in time for the 2011 New York Film Festival. For those of you who fear the prospect of a second Tativille 'contributor,' let me be the first to reassure you of not only Lisa's exceptional ability as a film scholar and reviewer - those of you who are longtime readers already will be well aware of both - but also of her extraordinary credentials: Lisa is a rising seventh year PhD candidate in the Cinema Studies department at New York University, where she also holds an M.A. in Cinema Studies and a B.A. in Philosophy. Suffice it to say that Lisa's future contributions will only improve what is now 'our' little site.

As to the promise of increased future posting, Lisa and I will be covering this year's NYFF on an equally official capacity, beginning next month. For those of you who are perhaps less than fully versed on the exigencies of international art cinema (Tativille's primary, though not exclusive focus) distribution in New York, basically this is how it works: the best in world cinema of each calendar year more often than not begins to arrive in late September with the commencement of the NYFF; subsequently, the next eleven months tend to see the commercial releases of most of those titles, as well as first-runs of works that were passed over by the festival, sometimes more deservedly than others. 2010-2011 has been no exception to this pattern, with the the majority of early 2011's best titles being holdovers from last year's event: Apichatpong Weerasethakul's Uncle Boonmee Who Can Recall His Past Lives, Abbas Kiarostami's Certified Copy, Raoul Ruiz's Mysteries of Lisbon, Cristi Puiu's Aurora, Radu Muntean's Tuesday, After Christmas, Michelangelo Frammartino's Le quattro volte, Mike Leigh's Another Year (released in Connecticut this past January), Frederick Wiseman's Boxing Gym and Xavier Beauvois's Of Gods and Men. As I saw the first six in 2010, again at the NYFF, and the last three in the first quarter of 2011, it should become apparent why posting on this site can become a bit sparser as the summer months progress - and why there is also reason for optimism as September nears.

Of those 2010 films not screened at last year's event, noteworthy 2011 releases and festival premieres have included Patricio Guzmán's Nostalgia for the Light, Werner Herzog's Cave of Forgotten Dreams, Kim Jee-woon's I Saw the Devil, Jia Zhang-ke's I Wish I Knew, Na Hong-jin's The Yellow Sea and Mahamat-Saleh Haroun's A Screaming Man. Here, I have less excuse for my more recent lack of production on Tativille - save for the fact that this is hobby and that I do happen to be writing a dissertation on film - with only the Herzog prompting a post. However, I would add that none of these films, in my estimation, quite matched the Ten Best Films I saw last autumn (including the first six listed above, in order of preference; as well as a certain Tony Scott film that recently took an unwarranted beating from a good friend of this site). As for actual 2011 premieres and releases, I thus far have seen two films that will merit mention when I account for the best of the year this coming December: Béla Tarr and Ágnes Hranitzky's The Turin Horse (the one film that I've seen on the 2011 NYFF slate - and let me assure you, it absolutely is not to be missed) and Terrence Malick's The Tree of Life. That's two more premieres of a very high caliber than I had seen at this time one year ago. Here's to the promise of 2011!
Posted by Michael J. Anderson at 2:22 PM

I am glad to hear this.
If it interests you at all, I rambled about some of the films you surely will be seeing at NYFF, on my blog. Click my name, should work.

Not the most impressive Cannes/MIFF lineup this year. It looks as if Venice holds far more goodies in store. A new Whit Stillman! With Aubrey Plaza! You'll be getting a couple of those films.

Thanks for the link, Trip. (I'm really sorry that I hadn't added you to my links sooner, but that now has been remedied.)

At first glance, I certainly agree that it doesn't appear to be an overly impressive Cannes/MIFF/NYFF slate. And actually, NYFF won't be screening the Hong, Dumont or even the Stillman, so there are some potentially big absences. Still, beggars as they say can't be choosers, and honestly this summer has been awful locally for new film.

Also, I added "I Wish I Knew," which simply slipped my mind in compiling the first list. I actually may have preferred it to "24 City." Still, we need some fictional Jia and fast!

Pity about the Hong not screening, though Cinema Guild (saviors!) has picked it up, because seeing it with an audience -like Hahaha last year -is ideal. Maybe it's because I see about 2 comedies in cinemas every year, but having others giggle at Hong's characters' drunken foolishness along with me was delightful.

And yes, I agree. Only The Tree of Life and the quite-remarkable Mildred Pierce miniseries provided the top quality. Actually, I was enthralled by Joe Wright's Hanna, such an unabashedly formalist affair with an eccentric heart. And as a Hitchcock fan, I hope you've checked out Collet-Serra's Unknown, it's not much, but he is certainly talented and it's a blast. Other than those, the Aussie documentary Mrs. Carey's Concert brought the goods.

It doesn't strike me as your thing at face value, but did Sucker Punch pique your curiosity? It did mine, what with the alleged Brechtian devices which indeed exist but aren't totally successful. It's kind of an exercise in anti-titillation, Snyder parodying his own fetishised images.

I have not seen 24 City yet for some reason. I liked I Wish I Knew quite a bit, and it just missed my top 20 of last year. I also crave fictional Jia, honestly.

(thanks for adding me)

Trip, you're right in guessing that SUCKER PUNCH failed to pique my interest. While I appreciate that it may be trying to do something - successfully or not - I still can't see viewing the film anytime soon when there are so many other films/periods/national cinemas/movements out there to be explored. This really isn't a knock against the Snyder per se; just an honest assessment of my personal priorities, which more and more and becoming those of the film scholar rather than the critic of new films. It's where the paycheck comes from, after all. Hence, once again, the lack of writing on this site.