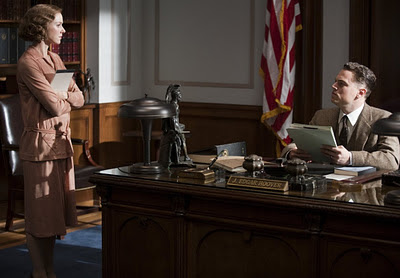 Clint Eastwood's J. Edgar (2011), from a screenplay by Dustin Lance Black, commendably - and very unexpectedly - manages to marry the director's career-defining, post-Dirty Harry (1971) project of self-revisionism with Black's sensitive and accessible biographic work in Milk (2008). In so doing, the supreme and most supremely American film artist of the post-classical era has produced his finest historical work in some time, while once again reviving the core of his interests that last found noteworthy expression in 2008's presumed final testament, the extraordinary Gran Torino. With J. Edgar, Eastwood and Black again show the flexibility of the director's extra-legal formula, with the object of the implied auto-critique becoming the inventor of the modern F.B.I., whose abuses of civil liberties and general unconcern with due process find complicit agents in the legislative and executive branches. While it is not immediately clear whether the right-wing Eastwood, ever interested in the politics of his moment, means any specific criticism of the Obama administration - his publicly articulated concerns with the size and scope of the federal government, and particularly of its capacity to spend, are broadly applicable to most recent administrations - his more socially liberal Libertarian affiliation explains his interest in Black's narrative, whether it is the social liberties again that fall victim to the aggressively anti-Red J. Edgar Hoover (Leonardo DiCaprio) or the same-sex romance that provides the film with its understated romantic center.

Much of the strength of J. Edgar resides in DiCaprio's charismatic turn as Hoover, from his professional breakout in the immediate aftermath of the Bolshevik revolution to his backroom clashes with Richard M. Nixon more than five decades later. While Eastwood and Black retain the epic scope of Martin Scorsese's previous historical and biographic pairings with DiCaprio in Gangs of New York (2002) and The Aviator (2004), therefore, Eastwood's latest 137-minutes pass with characteristic brio (he has long been one of Hollywood's best visual storytellers), freeing DiCaprio not only of the bloat of these previous outings, but in the case of the former film, from Daniel Day Lewis's scenery-devouring shadow as well. Instead, J. Edgar, in the shared estimation of Lisa K. Broad, marks Eastwood at his most Fincherian - over the past half-decade, David Fincher has proven himself to be Eastwood's narrational heir-apparent - with Zodiac's (2007) procedural, due-process emphasis, The Curious Case of Benjamin Button's (2008) physical transformations and thematic emphasis on romantic longing and The Social Network's (2010) testimonial structure, not to mention the presence of Armie Hammer, all bringing the younger director's work to mind. With the latter providing the other half of Eastwood's typically restrained love story, the filmmaker once again finds himself in the impossible romantic territory, as R. Emmet Sweeney has observed, of the director's great The Bridges of Madison County (1995).

Eastwood sensitively captures their love (not only eros, but also philia) through a series of glances and intimate gestures that focalize their minor-key relationship. Eastwood's piano scoring echoes this strategy, as does Tom Stern's de-saturated, low-key, wintery mise-en-scène - Stern's work comes quite close to black-and-white on a large number of occasions. However, it should be added that J. Edgar is not a work that lacks in humor, as Hoover's push-ups to prepare for the strapping Hammer's interview and his showboating amid the Library of Congress's card catalogs, on a first date with Naomi Watt's Helen Gandy, both attest. Indeed, there is a charm that ultimately elevates Eastwood and Black's treatment of a historical figure who is more often characterized as charmless, a humanity that finds expression not only in his life-long same sex relationship, but also in his fraught interactions with his demanding mother (Judi Dench) and in his exchanges with his no less loyal secretary, the aforementioned Miss Gandy. In this sense, Eastwood and Black round out their portrait of a man whose cruelty and callous self-regard - he consistently re-writes the legend, taking credit which is far from deserved - remain the dominants.
Posted by Michael J. Anderson at 7:57 PM