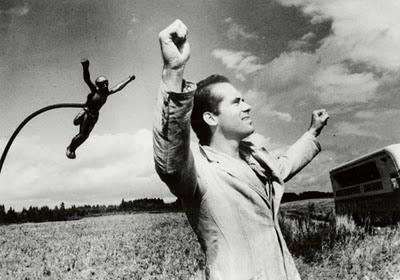 All events will be held in the auditorium of the Whitney Humanities Center, 53 Wall Street, New Haven, and are free and open to the public. Foreign-language screenings will be presented with English subtitles. Print and video formats and running times are listed below. 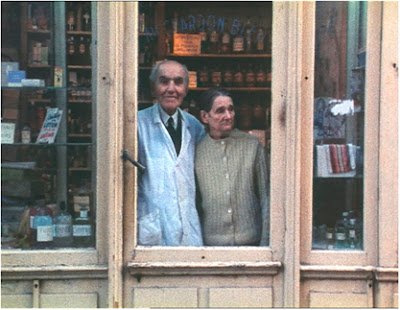 Conceived by the ‘Left Bank’-group auteur as a portrait of her 14th arrondissement Rue Daguerre neighbors, Daguerréotypes captures the quotidian daily routines of a population that Agnès Varda later described as “a sort of silent and conservative majority that expressed the end of a certain France in the 1950s, of the small neighborhood shops where most people worked in pairs.” Daguerréotypes however does manage to inscribe this anachronistic mode of Parisian life in the elderly proprietors of the Blue Thistle perfumery, whom Varda confesses were the initial inspiration for a film that ultimately satisfied her desire to “go through the shop windows of the street, to watch the tradesmen and experience the long periods of waiting as time passes.” In thus fixing foremost on the small-scale, trade and craft labors of her Montparnasse neighbors – when she is not presenting the community as they join together for an itinerant magician’s performance or quizzing her on-camera subjects about their rural, mostly western origins or how they met their respective spouses – Varda pursues an artisanal interest that parallels her own craft-like filmmaking strategies. On the other hand, with regard to Daguerréotypes’ durational interest, as well as in its cartographic emphasis, the concerns of Varda’s documentary feature echo those of her fictional, ‘real-time’ masterpiece, Cleo from 5 to 7 (1962).

Commissioned by French television as one of seven seven-minute shorts to be made by female filmmakers after UNESCO declared 1975 “international women’s year,” Agnès Varda takes eight minutes to consider eight subjects related to the larger question of what it means to be a woman. Focusing on the theme “our body, our sex,” Varda presents a series of women, across a spectrum of ages, physical appearances and with and (controversially, given the time of day that it would screen) without clothing, as they all consider the nature of womanhood. Among the more memorable of the filmmaker’s on-screen figures is the nude, “pregnant up to her ears” Catherine, who laughing and swaying insists, “I feel beautiful, full and desirable.” While she adds that she doesn’t “care about society,” in responding to an off-screen male voice that suggests that it is the woman’s responsibility to build the human race, other representatives of her sex disagree, both embracing this role in full in one instance, and denying that motherhood has any bearing on womanhood in another.

Divided into seven segments – Opening pages, Laura speaking, Stones, Louise’s story told in thirteen shots, Acrobats, Laura listening, Puzzle ending – Riddles of the Sphinx contemplates the forgotten figure of the Oedipal myth, the feminine Sphinx, who not only represents the unconscious to Oedipus’s conscious mind but also offers a threat and riddle for the patriarchal order. Occurring both at the figurative and literal centers of theorists Laura Mulvey and Peter Wollen’s experimental work, and comprising the overwhelming majority of its ninety-two minutes, are thirteen panoramic sequence-shots narrating Louise’s (Dinah Stabb) crushing domestic life, separation from her husband and consequent struggles, both personally and politically, to function as a working single mother. In each of the distended circling takes, Mulvey and Wollen conceal more than they disclose, resisting, in the image of the former’s scholarship, the urge to linger on or even show the female body fully articulated within the mise-en-scѐne. Riddles of the Sphinx’s panoramic form thus achieves ends that are diametrically opposed to the abundant, immersive environments of equivalent 360º visual strategies; it also destroys the proscenium spaces that the period’s other supremely Mulveyan text, Jeanne Dielman, 23 Quai du Commerce, 1080 Bruxelles (Chantal Akerman, 1975), continues to utilize. While both films offer radical counter-forms to dominant, patriarchal cinema, therefore, Mulvey and Wollen’s offering represents an even more radical break from the cinema that both films tacitly critique. 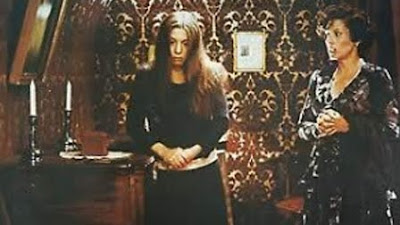 Commonly credited with inaugurating Manoel de Oliveira’s signature theatrical idiom, Benilde, or the Virgin Mother represents the second in the now one hundred-two year-old filmmaker’s “Tetralogy of Frustrated Love.” Interrogating, to quote Oliveira, “the real difference between theater and cinema,” the question of where one starts and the other ends, Benilde opens with what Randal Johnson (in Manoel de Oliveira, 2007) describes as a “rapid, sinuous traveling shot backstage.” With Oliveira’s fluid camera ultimately entering the constructed set wherein the filmmaker’s ‘immaculate conception’ narrative will unfold in a series of three demarcated acts, with each staged entirely within a single room of the same home, Oliveira replaces his earlier overtly ‘cinematic’ strategies with his consequent arch theatricality. Though Benilde would be criticized thereafter for not adequately dealing with the tumultuous political situations under which it was produced and released, the ‘Carnation Revolution’ and the ‘Hot Summer’ respectively, Benilde does inscribe a “thoroughly repressive, moralistic society” very much in keeping with the dictatorship that the former overthrew. Thus, for the director of “Films from the Darkest Hour’s” highlight Aniki Bóbó (1942), Benilde would prove a less explicit Day of Wrath (1943), again in Johnson’s judgment, even as it more directly borrowed from Carl Th. Dreyer’s arguably miraculous Ordet (1955), in balancing the opposing claims of religious faith and materialist skepticism.

Shot during the summer of 1975 and released a little more than two months after Francesco Franco’s death in November, writer-director Carlos Saura’s Cría cuervos… opens with the death of philandering patriarch and Generalísimo-stand-in Anselmo (Héctor Alterio) as eight year-old daughter Ana (Ana Torrent) listens in from behind his closed bedroom door. Flashing forward twenty years into the future (from the picture’s opening, present-day setting), an adult Ana (Geraldine Chaplin, who also plays the young girl’s late mother) wonders why she wanted to kill her father – something that the eight year-old believed she had succeeded in doing. Ana’s sociopathology accordingly engages the traumatic legacy of Franco’s thirty-six year-regime prophetically, while also fulfilling the Spanish proverb that provides Cría cuervos… with its title: “Raise ravens and they’ll peck out your eyes.” However, perhaps even more than for its felicitous overlap with the death of Franco, producer Elías Querejeta’s de facto sequel to his masterful Spirit of the Beehive (Víctor Erice, 1973) resonates for the authenticity with which Saura depicts his trio of child subjects across a shifting landscape of fantasy and memory. Again it is the focal Torrent – who made her legendary debut in Erice’s film at age six – that proves most memorable, with her guarded, introspective lip-syncing of Jeanette’s “Porque te vas” ranking among the most vivid and tangible articulations of childhood emotion in the history of cinema.

Winstanley, the second of two collaborations between silent film historian Kevin Brownlow (Parade’s Gone By) and military history expert and costume picture consultant Andrew Mollo, scrupulously restages the “Diggers’” struggle to establish an agrarian commune on the public lands of St. George’s Hill in 1649, following the declaration of the Commonwealth earlier that year. Despite relying on a meager ₤17,000 grant bestowed by the British Film Institute and their own limited private resources, Brownlow and Mollo invest their biography of Gerrard Winstanley and his early followers, many of whom were soldiers in Oliver Cromwell’s army, with extraordinary historical authenticity: through Mollo’s connections, the filmmakers managed to lease armor from the Tower of London for an opening set-piece that borrows liberally from Sergei Eisenstein’s Alexander Nevsky (1938); while at the commune, the filmmakers introduce extinct breeds of chicken and swine, which accordingly serves to locate Winstanley in the hyper-realist tradition of Erich von Stroheim. In fostering the impression that the events in their meticulously recreated Commonwealth-era Surrey were unfolding in the present-tense, as Brownlow later described his and his partner’s objective, Winstanley likewise inscribes a historical mode most associated with former collaborator Peter Watkins (Culloden, 1964). Like Watkins, who would later try his hand at a similar French experiment in 2003’s La commune (Paris, 1871), Brownlow and Mollo rely mostly on non-professionals, including school teacher Miles Halliwell as the eponymous lead, and squatters-right advocate Sid Rawle, whose memorable “Ranter” offers a seventeenth century parallel to the latter-day hippie.

Born the son of the major Russian poet Arseny Tarkovsky outside the small country town of Yuryevets in 1932, Andrei Tarkovsky was left to live with his mother, Maria Ivanova Vishnyakova, after his parents separated at age four. This formative childhood trauma accordingly offers a point of narrative departure for the cinematic master’s essentially autobiographical The Mirror – where Tarkovsky toggles between a childhood past and a contemporary present – and also explains the displacement of the absent Arseny onto the audio track (upon which the latter reads his original poetry). Consistently presented on camera, however, as Tarkovsky further pursues the logic of his childhood recollections, is Andrei-surrogate Aleksei’s mother, played by Margarita Terekhova (who likewise embodies Aleksei’s adult partner Natalya; the male protagonist notes that he always remembers his mother as having his wife’s face). Terekhova’s matriarch indeed provides Tarkovsky’s screen autobiography with its primary – decidedly carnal – corporeal presence, even as the adult Aleksei, like the director’s real-life father, can be heard but never seen. Once again, this confirms The Mirror’s subjectively-oriented focalization, which the director combines with his own analogical and ultimately private poetic idiom – all within a work that in its exceptional confluence of forms (World War II newsreel and historical reconstructions; black-and-white, color and sepia) seeks to be all cinema, every bit as much as it does personal testament. Tarkovsky would rarely exceed his extraordinary ambitions in creating this confessional masterwork. 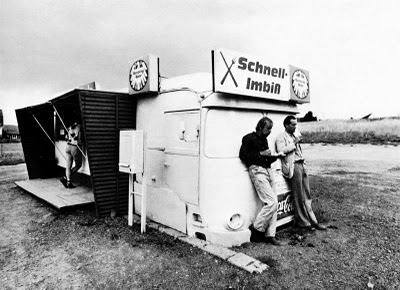 Shot, as the opening credits note, in eleven weeks during the second half of 1975, along West Germany’s frontier with the G.D.R., Wim Wenders’ road-movie masterpiece divides its attention between proletarian traveling projector-equipment repair-man Bruno (Rüdiger Vogler) and his bourgeois physician passenger Robert (Hanns Zischler), as they traverse the panoramic landscapes that materialize between Lüneburg in the north and Hof in the south. Wenders and cinematographers Robby Müller and Martin Schäfer dialectically balance stasis and movement in their long-take set-ups, while film editor Peter Przygodda’s dissolves add to the film’s languid rhythm and his occasional, anachronistic application of wipes to Kings of the Road’s focalized motion. Together these strategies comprise the film’s narrative and aesthetic dominant, its emphasis on time – as reflected in its original German title, Im Lauf der Zeit – which finds additional, analogous expression in the work’s predilection for ‘dead-time’ moments. As these segments unfold, Wenders favors wordlessness frequently, which he grounds in the silent film tradition referenced both in the opening prologue and in the pantomime that Bruno and Robert perform behind a backlit cinema screen. As with much of the pre-talkie cinema, Wenders’ film foregrounds music: American pop records prove particularly central within a film that bears this inspiration (Roger Miller’s “King of the Road”) in its North American release title. Of course, the film’s conspicuous Americana also possesses a darker connotation: in the words of one of the travelers, “the Yanks have invaded our subconscious.”
Posted by Michael J. Anderson at 10:27 AM