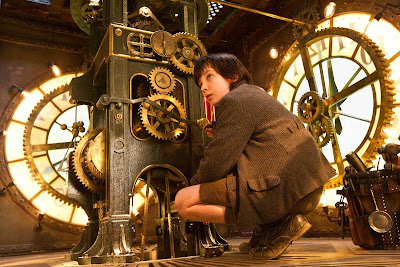 Martin Scorsese's Hugo, from a John Logan adaptation of Brian Selznick's 2007 novel, The Invention of Hugo Cabret, represents both a categorical improvement in contemporary stereoscopic aesthetics, and also the director's most conspicuously personal, and indeed successful (fictional) filmmaking in well over a decade. Hugo opens with a fluid forward travelling shot that proceeds, at break-neck pace, from the interwar Parisian streets to the interior of a steel-and-glass, art nouveau train station that will provide the film's primary setting - and a clandestine place-of-residence for the preteen Cabret (Asa Butterfield). Scorsese and cinematographer Robert Richardson's bravura camera figure ultimately comes to rest on the young Hugo as he glances out from behind an overhead clock-face, onto the teaming masses and arriving and departing locomotives below. Spatially speaking, Scorsese builds his film around the angled paths of the latter, which is to the say the same diagonal planes that provided the cinema's first projected work, Auguste and Louis Lumière's L'arrivée d'un train à La Ciotat (1895), with its exceptional depth. In his own first exploration of nascent stereoscopic technologies, Scorsese finds visual and motival inspiration in cinema's historic point-of-origin, in trains arriving in a station.

Yet, Scorsese treats three-dimensional photography as a wholly new art, as a medium with its own aesthetic laws, rather than as an overlay for traditional two-dimensional film practice (as it is frequently conceived in the blockbuster mode, and as it is literally applied to a number of older features). Scorsese works in all three dimensions, utilizing a modified classical style to discover representational strategies appropriate to his new medium; he advances the technology by making 3-D feel far more like classical narrative storytelling, with shallow (and distinctively frontal) shot/reverse-shot chains alternating with the film's more kinetic chase sequences in which the viewer is propelled through the damp, under-lit back corridors of the liminal structure. The filmmaker manages his competing planes with aplomb, racking focus regularly to subtly lead his spectator from one plane to another and back through his cavernous interiors. Indeed, it is a testament to the filmmaker's facility with the new technology that he does not constantly overwhelm his viewers with aggressive depth cues, but instead allows for subtle modulations that make the experience of Hugo much less taxing than other experiments within the same form.

Scorsese does however re-imagine existing footage in three-dimensions, with the narratively central work of Georges Méliès not only projected within the diegesis of the film, but also produced in the cinematic pioneer's glass studio. Among the more magical images in Scorsese's fictionalized semi-biography of Méliès occurs when Scorsese's stereoscopic camera shoots through a transparent, foregrounded fish-tank, which  demystifies Méliès's special-effect work; in so doing, Scorsese completes his narrative conjugation of the real and the fantastic, Lumière and Méliès, digital's photographic and animated modes. Hugo indeed represents a consummate, if at times overtly didactic overview of proto, early and silent film history, with the director's avocational interest in preservation providing the film with its take-home lesson. Following a decade-and-a-half of increasing work within the mode of film-historical, non-fiction pedagogy, Scorsese has married this interest with the loosely biographic idiom that had seen a qualitative decline in the director's since his major, hyper-Fordian Kundun (1997). Again, Hugo represents a much richer Scorsese, which it remains to be said often emerges in those less expected narrative corners and generic detours in his corpus, from The King of Comedy (1983) to The Age of Innocence (1993) and Kundun.

Though Hugo likewise presents unfamiliar generic terra firma, the filmmaker's latest is nothing if not a work of personal expression, with Scorsese dividing between two surrogates (in addition to his own on-camera cameo as a turn-of-the-century photographer): the forgotten Méliès and the latch-key Cabret. The director is at once the aging legend, deeply concerned with his legacy and the preservation of the past, and also the young technician and aspiring magician looking toward the medium's future.