In Appreciation of Alfred Hitchcock's Vertigo (1958), the "Greatest Film of All-Time" 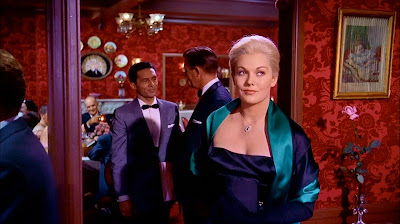 If – as 2012 Sight & Sound poll contributor Trevor Johnston argues – “all celluloid life is present” in five-time defending “greatest film of all-time” Citizen Kane (1941), the newly minted best of them all Vertigo (1958) proves more than a worthy successor not only for its equally encyclopedic approach to moving image forms, but also for its nearly singular annexation of film history. Saturated with optical tricks and techniques that recall the nineteenth century pre-history of the cinematic art, Alfred Hitchcock's late classical masterpiece deconstructs the star-object that provided the core of public interest in the post-World War I popular mode, through an observational form that reverberates with Roberto Rossellini's mobile experiments in dead-time and fellow modernist traveler Luis Buñuel’s expositions of obsessive desire (including the latter's 1955 The Criminal Life of Archibaldo de la Cruz, which features a  ‘Carlota’ of the Spaniard's own). Vertigo in substance as in historical position stands between the classical and the modern.

As a cusp, though still fundamentally classical articulation of cinema’s nascent modernism, Vertigo joins Hitchcock’s more conspicuously self-reflexive Rear Window (1954), the director’s multi-screen, counter-factual play on James Stewart’s alternative romantic futures. Yet, it is not simply that Vertigo ‘joins’ Rear Window in a mode of narration, but that, in part, it earns its own comparative proto-modernism in its response to the earlier film. One might even say that the memory of Rear Window activates Vertigo – a masked (spiritual) sequel that witnesses Stewart’s protagonist actively engaging with the world he only passively received in the earlier masterpiece. John “Scottie” Ferguson is L. B. Jefferies having risen from his wheelchair, his cane and girdle only temporary reminders of the accident that (as with Rear Window’s filmed photographs) opens the picture. When Scottie consequently dives into San Francisco Bay to save the drowning Madeleine Elster (Kim Novak) he exchanges the voyeurism of Rear Window and Vertigo’s first act for a more active agency within Hitchcock’s meta-cinematic world. In effect he becomes involved in the framed world that Jefferies spends most of his time furtively observing.

Following Vertigo’s roof-top prologue, Scottie is introduced in ex-girlfriend Midge’s (Barbara Bel Geddes) San Francisco apartment, a space that provides its own screen-like panorama of its urban environment, with a set of tan roman blinds to match those in Jefferies’ home. Unlike the latter’s relatively spare New York space, where every object possesses thematic weight, lingerie designer Midge’s home studio abounds with images from her profession in what amounts to a comparatively crowded visual field. (Midge’s cantilevered brasserie speaks both to the bust obsession that defined the age of Marilyn and Jayne, while also telegraphing the discourse of false perfection that undergirds Vertigo’s dissection of the female screen star.) In the office of shipbuilder Galvin Elster (Tom Helmore) that immediately succeeds Midge’s bohemian flat, Hitchcock employs the same design density, with the interior’s walls teeming with portraits and paintings of Elster’s city and industry in roughly Victorian fashion. Here as in Midge’s home, Hitchcock’s mise-en-scѐne tends more toward the tableaux than to the aggressively tight framing that defines the director’s prior master-class in shot/reverse-shot staging. Indeed, Vertigo on a fundamental level is a cinema of painting, with the portrait of the Carlotta Valdes and Midge’s re-appropriation (which she will give the Duchamp treatment) both providing significant markers of the roles that Vertigo’s female players will seek to inhabit.

Hitchcock’s set-design comes to even greater (and far more memorable) effect at Ernie’s, where the red velvet walls provide the most striking of possible contrasts to Madeleine’s rich emerald gown. It is here that Scottie’s hallucinatory fascination commences as he spots Madeleine stepping through one of the doorframes that effectively double the space’s seven-and-a-half foot mirrors. She comes into his world – stepping through what in effect is a mirror – as he will later enter hers, again after he fishes her out of the cold Pacific waters. When the two are finally introduced with Madeleine wearing Scottie’s red robe as her clothes dry before the fire, the male protagonist in effect has been brought into immediate contact with screen object of his fantasies, the perfected blonde star of the 1950s that Vertigo’s final movement confirms to be a construction. Madeleine, who expressly plays the role of Carlotta (the deceased nineteenth century beauty whose insanity led to her suicide), is later revealed to be Judy Barton, a gum-chewing shop-girl from Salina, Kansas with an unglamorous personal history and her fair share of romantic regrets. On the level of the film’s discourse the ideal of the screen is supplanted by a far less alluring alternative.

Of course, both Madeleine and Judy are also creations of Ms. Novak, whether it is the glamorous idealized star in the case of the former or the then very current method-style working class female lead that the latter will prove (and which Madeleine herself employs narratively in coming to occupy Carlotta’s McKittrick House room). Vertigo thus provides a catalogue of period-specific performance strategies.

Ultimately Judy acquiesces to Scottie’s wish to bring his dead Madeleine back to life – it should be pointed out that she was compelled to complete the trajectory demanded by her role – allowing her own specificity to be subsumed by Madeleine’s greater (impossible) perfection. By this juncture it is Judy’s psychology that has become focalized, after Scottie's mentation drove the first two thirds of the narrative (with the profoundly fictional Madeleine’s remaining mostly unknowable) that concludes with the Kafkaesque disavowal of Scottie's masculine potency at Madeleine's inquest. Judy in effect becomes the real woman behind not only the role but the star persona, made to conform on life as on screen to the whims of her romantic partner. Hitchcock’s film is aware of how the art remakes those that it (and he) uses.

I have never been able to warm to Vertigo, much preferring "Shadow of a Doubt, Notorious, The Birds and North by Northwest.

Recently rewatched Ermanno Olmi's The Legend of the Holy Drinker. It was a revelation, one of the most spiritual films I have ever seen. For me, it's the equal of Dreyer's Ordet.