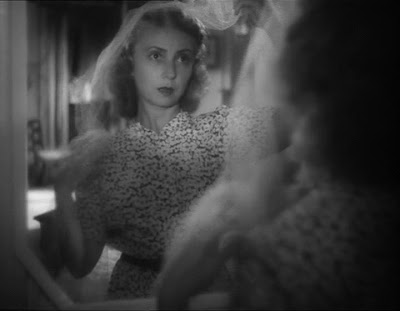 Begun in 1939 but not completed until well after Germany's 1940 occupation of northern and western France, Jean Grémillon's masterful Remorques (Stormy Waters, 1941, 82 mins.) may well stand as the last 'Brillante' gasp of the pre-World War II French cinema, with its consistently inventive mobile framings, fragrant mise-en-scène and lush musical accompaniment all certifying a by then lost golden age. Grémillon and cinematographer Armand Thirard immediately establish a potent, personal form of expressionism, with an inebriated forward tracking shot stumbling along with a boozy minor player. He brings the camera to a glimmering, though on occasion ruggedly cut wedding banquet, where Grémillon organizes the elegantly keyed interior in a receding series of luminous planes that rapidly fall out of focus. As the dancing proceeds, Grémillon's camera waltzes with lead, married guests-of-honor Jean Gabin and Madeleine Renaud as they converse beneath a heavy orchestral canopy. A sudden, brisk, punctuating track backward will momentarily close the scene - though it will soon re-commence with the consequent arrival of one of Gabin's tugboat employees on the back of his speeding motorbike, having arrived out of the onyx night.

In the poetically under-lit nautical scene that follows, Grémillon's mise-en-scène becomes increasing haptic, with the cold Atlantic rains piercing through Gabin's outerwear. The filmmaker liberally alternates between pleasurably quaint models and second-unit documentary set-ups that feature the sailors at work as they labor to rescue a storm-tossed vessel. Inside the cabin of the tugboat, Grémillon's tripod set-ups swing violently with the ship, thus extending the film's expressionistic program. Gabin and his crew save a soaking, slick-haired Michèle Morgan as she risks her life in an attempt to flee from her soon-to-be estranged, villainous husband's ship. Back on shore, the previously happily married Gabin and Morgan abruptly begin an affair, one that opens with a now lighter-haired Morgan expressly taking the place of Gabin's absent, ill wife. As they arrive at an unoccupied beachfront cottage, Morgan observes that the place reminds her of a ghost film she once saw - an apt citation given the low-key visual and model work (reminiscent of James Whale) and the angular architecture drawn from German Expressionism that in this space in particular, strongly obtains. A second meeting in another flat coincides with a powerful lightning storm that both extends the metaphor that brought Morgan into Gabin's life and also externalizes the couple's electric passion. For its visual pursuit of its thematic motifs alone, the Jacques Prévert-scripted feature matches if not exceeds any of the screenwriter's prewar work with Gabin, Morgan and the far-better known Marcel Carné.

Remorques concludes with one of its most inventive, if also somewhat primitive passages: the spectator hears a voiced-off funerary oration that doubles as a moral chastisement of the unfaithful Gabin. In this moment, Grémillon re-frames his cardinal storm metaphor within an ancient tradition of divine judgement that stretches back to the Book of Genesis. On the very waters that by 1941 would be controlled by the Nazis, Gabin is fated to travel life alone aboard his ghost ship.

A special thanks is due Lisa K. Broad for her observations included in this piece. Remorques is available on both Hulu Plus and in the Criterion Collection's Eclipse-label Jean Grémillon During the Occupation box set.
Posted by Michael J. Anderson at 2:49 PM