In a matter of speaking, Surviving Life (Přežít svůj život, 2010), Czech master animator Jan Švankmajer's feature-length collage of live-action cinema and stop-motion cutout animation, may prove among the 35th Starz Denver Film Festival's more old-fashioned offerings, thanks to its highly orthodox surrealist iconography and its no less conventional readings of both Freudian and Jungian theory. Surviving Life, a "psychoanalytic comedy" as the filmmaker describes his work in an introductory talking head, functions no less as a primer to all of the above, with the film's immediately absurd flow of symbols all systematically decoded over the course of the film's explorations of middle-aged lead Václav Helšus's Oedipal unconscious. Švankmajer allows for very little ambiguity, which adds both to the lucidity of the film's narrative - Surviving Life is about as accessible as any work of traditional European surrealism - and again insures that on some level the filmmaker's latest is anachronistic, that it is a work of the twentieth century (and its first half at that). Yet, it is in its commitment to surrealism and the dream, which Švankmajer insists our civilization "has no time for," particularly as there no money in the latter, that Surviving Life gathers its force. 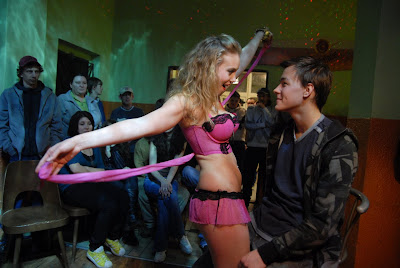 Two generations Svankmajer's younger, fellow Czech director Zdeněk Jiráský's handsomely photographed Flower Buds (2011, Poupata) expresses a decided nostalgia for the socialism of Jiráský's youth, the same socialism that Svankmajer's masterpiece Dimensions of Dialogue (1982) devoured with a relish equal to the anti-materialism of all three films. In Flower Buds, Jiráský stages his contrast between the collectivistic old and capitalistic new in a set of competing dance outfits and styles: the "flower buds" of the film's title, a middle-aged, all-woman exercise club who rehearse and perform socialist-brand mass spectacle routines for their small town public; and the millennial-aged strippers who perform for the community's inebriated pub habituates - and at one point, markedly displace the older women. Of particular note, with respect to the latter, is the focal Susana (Aneta Krejčíková, pictured) who in a measure of the perversity of the new system, is purchased by Joseph Gordon-Levitt lookalike Honza (Miroslav Pánek, right) in attempt to insure her affection. Though the specter of middle-aged dance rehearsals and dive-bar stripteases suggests the path of quirk or worse yet condescension, as do the the hobbies of building match stick shops in a bottle and the presence of Vietnamese immigrants, Jiráský mostly avoids these world cinema traps, as he likewise escapes the miserablist tendency that his struggling backwater subjects would no less seem to telegraph. Instead, Jiráský pursues a strategy of realism - with one major, unfortunate exception in the picture's penultimate scene - that emits occasional moments of humor and irony that help to elevate Flower Buds above the more standard backwater subject.

This review was co-authored by Michael J. Anderson and Lisa K. Broad.

Surviving Life plays once more at the Starz Denver Film Festival, on Saturday, November 3rd at 5:00 PM. Flower Buds will screen Monday, November 5th at 6:30 PM and Tuesday, November 6th at 5 and 9 PM.
Posted by Michael J. Anderson at 2:55 PM