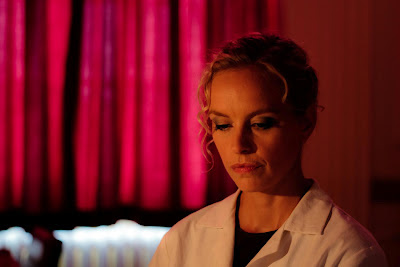 In the fifth consecutive installment of Ten Best Films' "Mini-Poll", the Tativille extended family's annual attempt to find some form of cinematic consensus for the year that was - by means of a statistically insignificant survey - general accord has once again been achieved. At least it has been reached in choosing the film of the year: Leos Carax's Holy Motors. Of this year's ten respondents, seven listed the latest by France's enfant gris (to quote programmer James Quandt) as one of the year's best, with an eighth citing it among the year's better runners up. Among the seven that picked Holy Motors, three chose it as the best film of 2012 - including Tativille's husband-and-wife proprietors - with a fourth listing it in second place. In other words, it was a decisive selection for this year's Mini-Poll respondents, even if personally it represented a soft number one after the very great Uncle Boonmee Who Can Recall His Past Lives and Once Upon a Time in Anatolia topped my own picks in 2010 and 2011 respectively. For the record, the former major masterpiece ranks tenth overall in the combined poll results (which are available likewise on the Ten Best Films post linked here) whereas the latter. sixth place finisher in 2011 received points from two more voters in two thousand-twelve, making it more marginally more popular than this year's surprise second place selection.

What was this year's number two? Well, suffice it to say that it premiered at the 2012 Berlin Film Festival (along with this year's even more startling fifth place selection) and is cited in visual form at the top of this post. (It's Christian Petzold's G. D. R.-themed Barbara if any question still remains for the reader.) Between Adopt Films' second and fifth place titles are this year's highest ranked American films, from a pair of well-established auteurs who got their directorial starts during the formative for us all 1990s. Numbers six through eleven - there were eleven films that got three or more films in this year's poll - include two more American titles from an even younger generation of directors, a pair of English-language films from outside the United States, and finally two additional titles from the European Union. Of these, the sixth place Amour came the closest to matching Holy Motors' top-end popularity with two of its three voters listing it as the best of the year, and a third slotting it in at number three. Haneke's strong performance is nothing new to the 'Mini-Poll,' with The White Ribbon remaining 2009's highest ranking world premiere (and of the survey's all-time top eleven).

Finally, let me list those additional titles that were cited by this year's remaining contributors as the year's very best: The Kid with a Bike, Leviathan, Looper, Moonrise Kingdom and The Turin Horse. Of these, only Leviathan has placed on a single list, though its advanced reputation - and its champion's exceptional track record - would suggest that you will see quite a bit more of it on the two thousand-thirteen Mini-Poll.

And for our individual ballots, click on the italicized websites listed below: