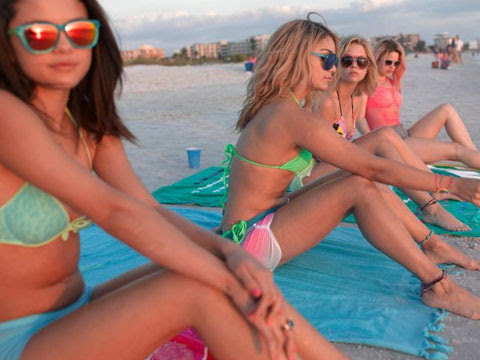 A floating miasma of fantasy and myth, Harmony Korine's Spring Breakers (2012) follows four childhood friends, Faith (Selena Gomez), Candy (Vanessa Hudgens), Brit (Ashley Benson) and Cotty (Rachel Korine), on their surreal odyssey into the delirium and degradation of college party culture. Spring Breakers slides deftly between the co-eds' competing and distinct objects of desire and despair, progressively projecting Faith's quasi-spiritual perception of sisterhood and paradise, Cotty's insatiable if somehow controlled (or controlling) path of sensuality and substance abuse, and finally the bi-sexual Brit and Candy's darker pursuit of a Nietzschean power and violence. That is, the nighttime scooter rides and Faith's swimming pool talk of buying a home together with her friends in Florida will be supplanted, in turns, by Cotty's binge-partying and the lusty celebration of her animal appeal, and finally by the (loaded) gun-barrel blow-job that the inseparable bad-girls Candy and Brit force on their shared paramour, Alien (James Franco). Franco's original Caucasian "g" of course will provide not only another source for the picture's shifting projections of fantasy - setting aside Faith, the girls seem to lose their identities in his presence, becoming both "mermaids" and "soul-mates" for the St. Petersburg baller - he also offers a path to the conspicuous consumption that co-eds collectively seek.

In this latter sense, Alien also presents a site of modern myth, filtering the flush criminal lifestyle of Brian De Palma's name-checked Scarface (1983) and the admixed racial archetypes of Jim Jarmusch's superlative Ghost Dog: The Way of the Samurai (1999). However, for the most outwardly innocent of the spring-breakers, the dabbler in Evangelical spiritual experience Faith - Gomez's character accordingly negotiates the continued American bifurcation between collegiate amorality and teenage fundamentalism - her confrontation of a genuine black-gangster culture (and not just its anesthetized white-rap alternative) provides the final impetus for her departure from the fallen, mythic MTV paradise. For her more Dionysian friend Cotty, the dream becomes a nightmare when she is struck by drive-by gunfire, which is to say when she deals with the real-world consequences of thug life - not that there is or is intended to be much of the real in the filmmaker's youth-fueled fable. Then again, when the film's fantastic register reaches its apotheosis in the concluding video-game bloodbath that sends the two most cold-blooded spring-breakers back to their middle American home (with promises of personal reform), Alien abruptly is cut-down, even before the final hail of bullets begins. For Alien, the co-eds' touristic reverie is indeed a tragically reality.

Spring Breakers ultimately concerns itself with an impossibility: the dream to make permanent the impermanent, whether again it is Alien's criminal lifestyle or the girls' substance-fueled week on a Florida beach. Korine approaches his subjectivized ephemeral subject with a looping, repetitive temporality that at once distends and even pauses time, a strategy that figures likewise in the film's indistinct narrative timeline, while also effecting the elegiac impression of an experience already lived, a moment already lost. Spring Breakers, in other words, slows time, while still admitting the impossibility of curbing its flowing - a point, in the latter case, that is brought home by the picture's propulsive sense of rhythm, of the film's forward progress. In the end, Spring Breakers is a work that is perpetually permeated by the seductive, by a life of material wealth and debauchery lived in a lawless paradise, under the electric glow of a pulsating neon, and in the eternal presence and bloom of the young female body.

No less a product of methodical mediation, Pablo Larraín's Cannes prize-winner and Oscar-nominated No (2012) filters its crowd-pleasing political content, that of the 1988 Chilean plebiscite, through a hyper-low grade video technology that succeeds first in historically situating the non-fiction subject in stylistic terms. As colors leech and whites bleach and blow out Larraín's analog imagery, in virtual avant-garde fashion, No trades on its outdated technology's obvious limitations to secure a sense of authentic visual experience, to give the impression less of the depicted moment itself than of how events appeared through the film's distinctive period media. In so doing, No also effectuates the kitsch experience of reliving an outmoded aesthetic past, something that Larraín's film does to an even greater degree in the re-produced period plebiscite ads that provide No with its purest moments of popular entertainment. In its period visual culture as well as in its anti-Pinochet politics, No is a work of contemporary consensus, of a flag-waving left-center populism that transforms No into an Argo (2012) for those uncomfortable with the Affleck film's pro-American and C.I.A. connotations.

This review was co-authored by Lisa K. Broad and Michael J. Anderson. Both films are currently being distributed commercially in the United States: Spring Breakers is being released by Annapurna Pictures and No by Sony Pictures Classics.
Posted by Michael J. Anderson at 9:13 PM

So is No any good? I am planning to watch it on a festival this week.
Today I'm watching Post Tenebras Lux which I'm very much looking forward to.

Yesterday I was blown away by Malick's To the Wonder which I would very much like to hear your opinion on. I thought it a vast improvement after the overall disappointing The Tree of Life.

Yes, "No" is strong work; certainly worthy of a recommendation.

I plan on seeing "To the Wonder" sometime in the next week, and would have to imagine that I will write something up by the end of next week. Stay tuned!

Looking forward! It is one of the most divisive films ever among my friends and me.

Today I saw Post Tenebras Lux. Definitely not without its major merits but also lacking in many respects. It somehow didn't seem thought through.

Next week I'll be watching Gebo and the Shadow. It seems there are many essentials from 2012 you haven't reviewed yet.