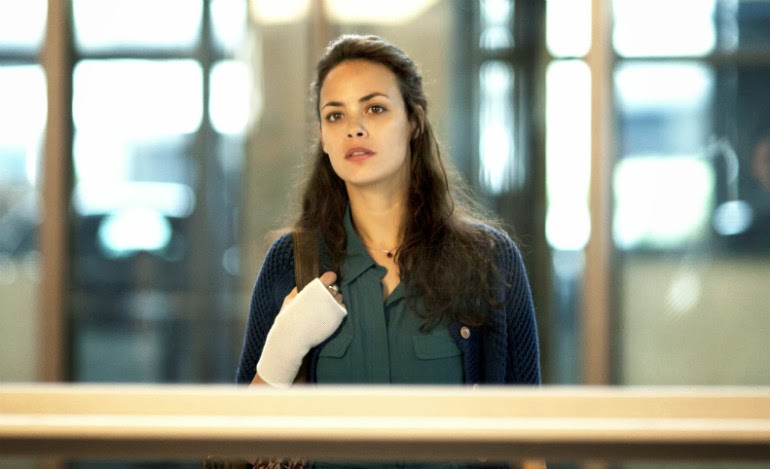 Anointed Iran's submission for the 86th Academy Awards, following its fêting for 'Best Actress' at last year's Cannes Film Festival - it failed not only to receive a 'Best Foreign-language' nomination, but even, quite unexpectedly and undeservedly, to secure a place on Oscar's nine-film shortlist - Asghar Farhadi's French-Italian co-production The Past (Le passé, 2013) transposes the transparent settings of the director's Iranian-set Oscar winner A Separation (Jodái-e Náder az Simin, 2011) into the French doors and sliding glass of contemporary France. The Past accordingly lacks some of the former's cultural specificity, its inscription of a surveillant, theocratic society - though The Past does still rely on acts of spying, of overhearing to expedite conflict. The Past, in other words, loses a bit of what might be described as the architectural masterpiece's 'Iranianess', though it will make up for this with a more Antonioni-esque form of incommunicable modernity that materializes in an opening set-piece where separated spouses Marie (Bérénice Bejo) and Ahmad (Ali Mosaffa) attempt to speak through a transparent airport barrier: here, Farhadi's film adopts the inaudible perspective of the hearer, rather than the speaker, reversing fields as their exchange progresses in silence. (Speaking of silence, there is a palpable, almost heavy lack of sound throughout much of Farhadi's un-scored film, which above all suggests the deep and fundamental theatricality of the director's latest feature.)

The Past also witnesses the return of A Separation's divorce-themed subject - a topic that seems to be inspiring a new generation of Persian filmmakers^ - albeit from a perspective that again resounds more immediately with European and French stereotypes than it does those of the Islamic republic - though, of course, there remains the almost inescapable intimation that the morality that Farhadi realizes is also present, however covertly, in his Middle Eastern homeland. Specifically, The Past brings a French heroine to the screen, in Marie, who has moved through a number of men over the course of her adult life. She lives with the married Samir (Tahar Rahim; pictured, middle), and as we soon discover, they've conceived their first child together. Meanwhile and melodramatically, Samir's wife lies comatose following an attempted suicide that thusly calls to mind the director's fine, L'Avventura-inspired About Elly (Darbâreye Eli, 2009), as will, more directly, the film's subsequent investigation into the causes for her self-inflicted act-of-violence. Ultimately, the admirably complex The Past favors something approaching the former film's uncertainty, which will again place the filmmaker's engaging and effective latest - a work, which it almost goes without saying, that is very well performed from the deeply unlikable Bejo down through to the film's adolescent and child actors - squarely within the domain of the Euro-Asian art film. 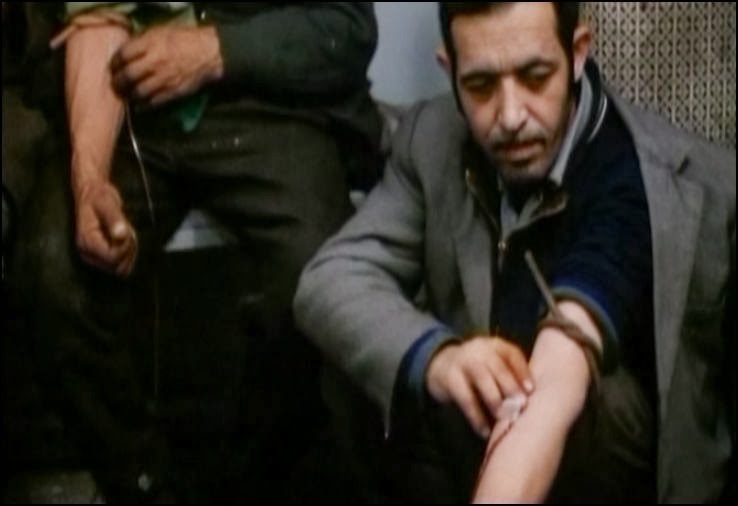 Begun in 1973-74, but not officially released until 1977 when it became Iran's first submission for Best Foreign Language Film*, Dariush Mehrju'i's The Cycle (Dayereh-ye Mina) remains one of the most forceful and unflinching social-problem films that the nation has yet produced, a work that seeks to expose and testify against the appalling (real-world) conditions of Iran's black-market blood banks*. Building on the social realism of the director's lightly surreal, symbol-laden New Wave landmark The Cow (Gāv, 1969), The Cycle deliberately discloses the abject conditions - almost unbearable from our post-HIV perspective - under which the gangsters prey on the approximately eight-hundred addicts (according to one the feature's physicians), who supply the nation's tainted blood supply: junkies huddle together on the floor, giving liter upon liter of blood, for a small fee, until they literally pass out. Among those who will find themselves in this hellscape is handsome seventeen year-old Ali (Saeed Kangarani), whose presence here is dictated by his father's failing health, rather than by addiction. In fact, Ali's intrinsic intelligence, ambition and resourcefulness, not to mention his material want, will insure his transformation into a successful black market entrepreneur and criminal facilitator - and even more insidiously, his loss of familial obligation and human compassion. Mehrju'i's Iran thus emerges as a nation ripe for the revolution it would soon undergo - a revolution, ironically that led the filmmaker to reside in The Past's France for several years (after another incidence of censorship) before finding the opportunity to direct his sharp housing-crisis satire, The Tenants (Ejareh Nesheenha, 1986), more than a half-decade later. 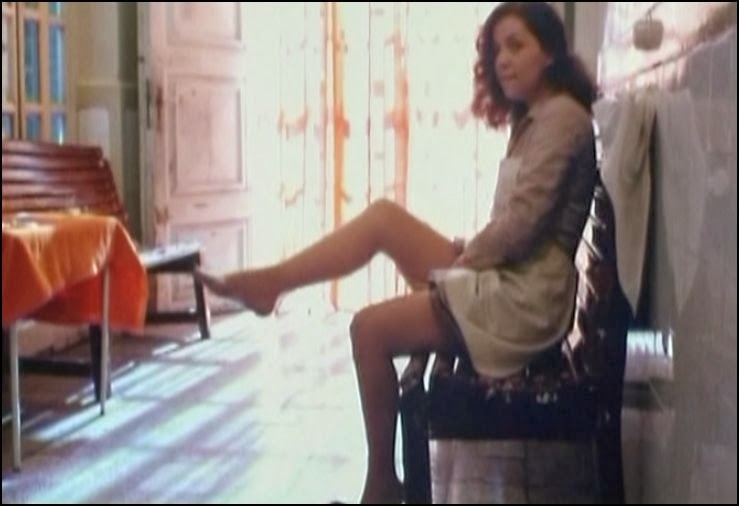 Then again, owing to its late-Shah-era historical moment, a period that famously experienced increased Westernization (and greater opportunities for women than would be the norm, subsequently), The Cycle displays a liberal modernity that at best has been a rarity in the post-revolutionary Persian cinema. Mehrju'i's film is frank not only in its depictions of the nation's grave social ills, but also in its presentations of the uncovered female body - both at the very top and very bottom, see pictured - and even in its elliptical inscriptions of casual extra-marital sex. Just as notable is Mehrju'i's characteristically deft light comedic touch, which we witness, for example, in Ali's wide-eyed encounter with Fourouzan's comely nurse Zahar: coming upon the bare-legged young woman as she plucks leg hairs, Ali quickly ducks behind a frosted pane of glass, where he will slide to the floor while maintaining his broad, unblinking gaze (which Zahar reciprocates as she slides on her stockings and covers her bare head). In this very Western moment, we see a society in the process of a sexual modernization that nonetheless would soon be arrested with the arrival of the Ayatollah Khomeini's theocratic Iran. 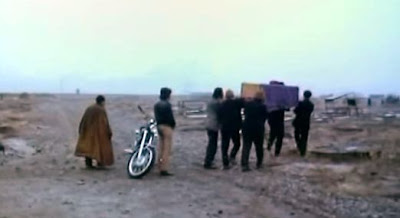 This, of course, is also a moment of unabashed youthful vigor, which, in Mehrju'i's work, would eventually give way to the sophisticated middle-age of the director's deeply Fellini-esque tale of spousal mistreatment and divorce, Hamoun (1990), and to Leila (1996), Mehrju'i's justly lauded polygamy-themed post-Revolution pinnacle. The Cycle, even more than The Cow in this critic's view, comes closest to matching Leila's achievement, as it attains not only the aforementioned candor, but also an incantatory, almost uncanny visual beauty that materializes, above all, in the film's hazy natural sunlight. From a pro-filmic perspective, beauty balances the ugliness - even within the filmmaker's establishing exteriors of a bleak, industrializaing urban landscape - that provides The Cycle's final justification. 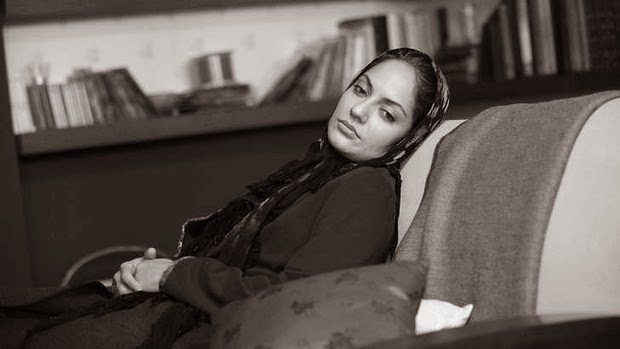 ^ The best of the plausibly Farhadi-inspired features that I saw in 2013 was About Elly and A Seperation star Peyman Moaadi's Snow on the Pines. Named 2012’s best feature, and awarded the best screenplay prize by the Iranian Film Critics and Screenwriters Guild, at a ceremony in which Merhruj'i also won a lifetime achievement award, Moaadi’s directorial feature-debut presents its subtle and open-ended narrative of marital infidelity and protracted dissolution in an alternating set of fluid hand-held framings and static set-ups that each make successful use of the film’s sensuous black-and-white cinematography. An actors’ film, naturally enough, Moaadi uses his performances to support a narrative that withholds the dramatic confrontation between the cheating husband and wronged wife - one that will prove comparatively low-key, ultimately - until very late in the narrative.

* According to Shahin Parhami, the Shah administration lifted its ban on The Cycle only after the state opened its first blood bank.

Sony Picture Classics is currently distributing The Past in North America, while The Cycle is available on Region-1 DVD courtesy of Nima Pictures.
Posted by Michael J. Anderson at 2:57 PM