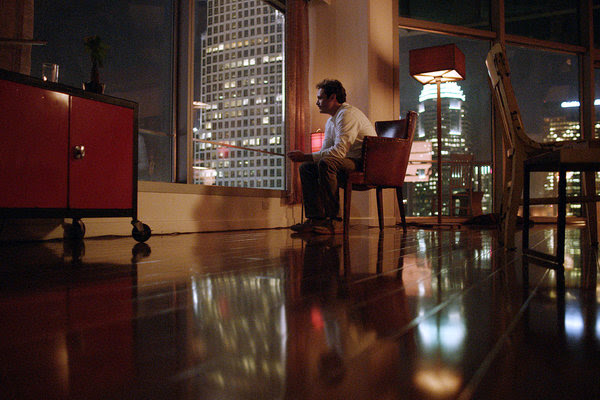 Always a welcome relief from the rigors and assumed responsibilities of year-end list-making season, January is that month, at least for this academic critic, where things get back to normal, where my viewing log again begins tilt away from the current releases that have dominated since at least early November, toward a more privately enriching balance of old and new. This changing of priorities, so to speak, has already yielded more than its reasonable share of exceptional viewing, beginning with Frank Borzage's recently released on home-video Little Man, What Now? (1934), a film that falls squarely within my academic area of specialization. Written about in this space, the outstanding Little Man, What Now? is perhaps most extraordinary (and exciting) as an object of auteurist research. A different kind of context - the social history of Shah-era Iran - provided the primary interest in and my reason for writing on another key January discovery (in one of my secondary scholastic fields), Dariush Mehrju'i's The Cycle (1977). But, of course, loyal Tativille readers will already know my admiration for both of these remarkable films.

Among those older January 2014 films that I have not considered previously on this site, Chu Yuan's The Magic Blade (1976, pictured), available on Eastern Masters home video, surely stands as the most purely pleasurable: composed in Shawscope with an at times almost Mizoguchian depth and elegance, The Magic Blade adopts a proto-gaming structure for its spatially dislocated pageant of studio-set-driven stagings - and the deliriously bizarre hired-killers that magically materialize in each. For the Bollywood enthusiast, the Chinese-language Magic Blade approaches the high kitsch that was being created by Manmohan Desai at approximately the same moment. From earlier in that same odd-ball decade, this past month also provided my first opportunity to view Barbara Loden's counter-classic debut Wanda (1970), or a better, and more richly specific Bonnie and Clyde, stripped of any semblance of Penn's romanticism. As befits a work of its now monumental critical stature, the sexual politics of Loden's exceptional film hint at the actress-director's profoundly marginal position in an inequitable and excluding American film industry.

As is inevitably true, given the studios' propensity to release their award-hopefuls late in the calendar year, my January also witnessed its share of noteworthy newer titles, with Martin Scorsese's The Wolf of Wall Street (2013) and Asghar Farhadi's The Past (2013) among the more successful. The only film that I felt the need to view twice in January 2014 - I wrote about my less conflicted second screening here - The Wolf of Wall Street exhibits both the strengths and limitations of the director's worldview, with the former ultimately overwhelming the latter in one of Scorsese's most entertaining epics in ages. As for Farhdi's latest, though it does not quite rise to the masterful level of A Separation (2011) in its manipulation of architecture for the purposes of its melodramatic narrative, The Past, reviewed here, does succeed in re-imagining its primary virtues within a decidedly French context. I also belatedly caught French-Canadian director Denis Villeneuve's Prisoners (2013, pictured), a strong piece of revisionist, vigilante-themed cinema that finds real interest in its curious and compelling religious discourse; Prisoners emerges, above all, as a consummate work of mood and mid-winter atmosphere.

Then there was Spike Jonze's Her (2013, pictured), my personal choice for the best new film I saw last month, and to my present thinking, the second best American fiction film of twenty-thirteen (just behind Richard Linklater's superlative Before Midnight). Extrapolating ever so slightly from our own, less-than-admirable iPhone-dominated existence, Her achieves an extraordinary intimacy and even empathy in its depiction of Joaquin Phoenix's attraction to and romantic affair with his operating system, voiced by Scarlett Johansson in a role that relies heavily on the spectator's cognizance of her absent, very familiar body. Her is a film filled with questions and ideas, and not simply those of a speculative, science-fiction variety: we are asked to consider what it is exactly that we love in another, and are confronted by the dangers (for any romantic relationship) inherent in the processes of growth and change. Jonze brings this story to the screen within a synthetic, digital environment - a flat, pro-filmic world dominated by whites, reds, pinks and oranges - that in some sense fuses with and confuses the film's sci-fiction subject with our own aesthetic connection to an anesthetized, Apple-style digital cinema. Her in this respect, which is to say in both content and form, is all about our love of machines - even as it seems to disclose something much deeper of Jonze's own romantic history.

Finally, to January's misses, more to footnote and give context to my cinematic month than to grind axes, not that you shouldn't be skeptical: excluding the more immediately forgettable and culturally off-the-radar - including a handful of American features from the early-to-mid 1930s, which I need not mention here - my most notable disappointments included the first and last films I saw in January 2014, Joel and Ethan Coen's Inside Llewyn Davis (2013) and Woody Allen's Blue Jasmine (2013, pictured). Though the former feels fairly central to the brothers' work, inasmuch as it provides a synthesis of their archetypal Odyssey and Job (sans restoration) narratives, and though Oscar Isaac is as good as advertised, I must confess that I found the experience of watching Inside Llewyn Davis to be, on the whole, quite unpleasant. While the same cannot quite be said for Blue Jasmine, Allen's dialogue - a veritable master-class in cringe-worthy exposition - insures its place at a level below the Coen's current critical favorite.
Posted by Michael J. Anderson at 5:04 PM

Labels: Blue Jasmine, Her, Inside Llewyn Davis, Little Man What Now?, Prisoners, The Cycle, The Magic Blade, The Past, The Wolf of Wall Street, Wanda

I wasn't a huge fan of Blue Jasmine as a whole, but Cate Blanchett was excellent.

I wasn't a huge fan of Blue Jasmine as a whole, but Cate Blanchett was excellent in it.

Just discovered your blog, and I'm enjoying your reviews. I too was disappointed in both Inside Llewyn Davis and Blue Jasmine. And I've liked every Coen brothers film to date, even the ones that were panned.