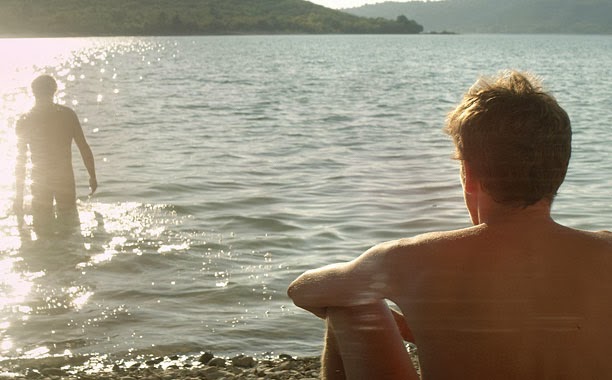 Distributed by Les Films du Losange, the French production company most associated with the films of its co-founder Éric Rohmer, Alain Guiraudie's Stranger by the Lake (L'Inconnu du lac, 2013) draws on the late master's suspended holiday-season settings, iterative narrative structures and two-shot conversational set-ups for its own, very different story of death and desire within the context of gay cruising culture. In this framework, that is by bringing a more expressly 'other-ed' portrait of male homosexuality to the screen than is common in this Modern Family media moment - Guiraudie populates his exceedingly explicit film with the conspicuously promiscuous much more than the monogamous, with the voyeur and the sexless bisexual - not to mention one that calls upon earlier 'cruising' stereotypes, Stranger by the Lake would seem on some level to court conversation-stopping accusations of homophobia. Thankfully, for once at least, we've been saved from this canard, for reasons one might imagine that have to do mostly with its abundantly apparent originality - that is for its organic joining of the deliberate and lyrical 'Losange' film, graphic gay copulation and indeed Chabrolian suspense, all in the service of a sharp, socially potent allegory.

Stranger by the Lake, to expand with spoilers on this last point, is at its core an allegory for unsafe sex in the AIDS era. (As a partial aside, the Tom Selleck-ness of Christophe Paou's Michel and Pierre de Ladonchamps' anachronistic choice of automobile both speak to plague's earlier peak years.) From the first, focal protagonist Franck (Ladonchamps) seems little concerned with using protection, an attitude that is not shared by one of his older hook-ups. Following another of his casual forested encounters, Franck spies his objet du désir Michel clandestinely drowning his lover in the eponymous lake. Concealing this knowledge and little concerned, evidently, for his own safety, Franck commences a passionate affair with the newly unattached murderer, a romance that increasingly separates the lead from his platonic conversational partner Henri (Patrick D'Assumçao). The observant and very sympathetic Henri, however, will confront Michel with an insinuation of his crime, an accusation that compels the mustachioed killer to follow the middle-aged divorced male into the erotically coded woods. Indeed, as the murderer Michel gives Henri what he wants - a throat-slashing in lieu of intercourse in the perfect, Bataillean grafting of AIDS-age sex and death - Guiraudie's camera intentionally misleads the viewer as it peers at the pair, in a manner that calls to mind many of the film's sexual encounters, through the slightly obscuring tall grass. Franck too will finally face Michel, at least in a fashion, as he willingly accepts death to satisfy his sexual desire - in what therefore proves the ultimate emblem of unprotected promiscuous (gay) sex in the AIDS era.

Throughout Stranger by the Lake, Guiraudie's visual storytelling proves never less than expert - cf. the maddening handheld work of the much lesser Blue Is the Warmest Color (2013) - with his observational, surveillance-style long-takes offering an ideal and thematically commensurate vehicle for the picture's voyeuristic psycho-sexual drama. The film's setting - Stranger by the Lake does not once deviate from the lake, its rocky shore and the surrounding woods - is no less ripe in its connotations, particularly when one considers the frequently nude, foreshortened male subjects that transform this space into a spoiled Eden of sorts (to again hint at the disease's early history, while also drawing upon or at least echoing such work as Thomas Eakins' "The Swimming Hole"). At the same time, Guiraudie's film is an exemplary piece equally of lyrical landscape cinema, a work that digresses to disclose the beauty of the lake's choppy blue-black surface or the sudden breeze that caresses the location's towering hardwoods. The acts depicted give way to the fact of the setting (to paraphrase Bazin) in this striking new masterwork of the queer cinema and 'Losange' catalog both.

Let me thank Lisa K. Broad for her considerable interpretative input. Since Lisa has not yet seen Blue Is the Warmest Color, any suggestion of the film's manifestly inferior quality is mine alone.
Posted by Michael J. Anderson at 4:41 PM