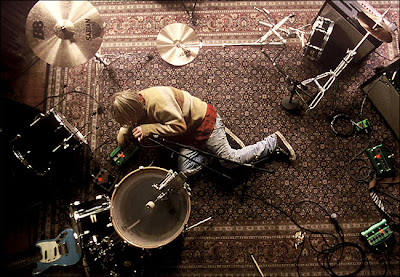 Prior to his most recent renaissance -- culminating with the Palme d'Or-winner Elephant (2003) -- audiences could have been forgiven for assuming that Gus Van Sant's best work was behind him. After all, it was Van Sant who was responsible for the middle brow irrelevancy of Good Will Hunting (1997), exactly the sort of work that is mistaken for good by people who don't know anything about movies. What's worse, of course, is that this same film made the career of the pestilent Ben Affleck -- a sin for which no amount of good deeds can atone. If that leaves grace as Van Sant's only option, he got close with Elephant, which demonstrated a love of its adolescent character's otherwise unknown in contemporary cinema.

In his latest, Last Days, as much a biopic of the late Kurt Cobain's final moments as Elephant was a picture about Columbine -- that is in everything but name -- Van Sant again tackles adolescence: in this case of the prolonged variety, the twenty-something rock star. As his drug-addled subjects, Blake (the Cobain character played by Michael Pitt) and his hangers-on, drift through a dilapidated Pacific Northwest mansion, which organically showcases the same deterioration as befell Blake's psyche in these "last days," Van Sant portrays lives lacking the emotional compass required for self-preservation. Yet unlike his beautiful, awkward, and in the case of his killers, tragically-misguided teenagers in Elephant, there is nothing but ugliness on display in Last Days. However romantic the character of Blake may be, beauty is not part of the calculus; the universality of Elephant has been replaced with the particularity of Blake, which indeed mediates the discursive power of his tragic end. To have compassion for the characters in Elephant is to draw on our own recollections of our teenage years. To watch Blake and his live-in guests idyll is to witness something to which the majority of viewers cannot relate out of their own experience. At best, pity ensues; at worst, disgust. In either case this is no replacement for a compassion compelled by understanding.

Though Last Days does not therefore equal Elephant in its emotional scope, it does rival the prior work in its aesthetic ambitions. Here, again Van Sant fragments time, replacing an exact inscription of the final 90-plus minutes of his life with a dispersed impression of these "last days." Dispersed, that is, as other characters float in and out of the narrative in order to give shape to his isolation -- gestures of help and abandonment are combined to instantiate Blake's final fate.

Of course, Richard Linklater took the opposite approach in his wonderful Before Sunset (2004), where the duration of the story is replicated in a near facsimile to real time. No similar ambition, however, is on display in his latest, Bad News Bears, a remake of the classic ESPN Classic, The Bad News Bears (1976). While this does not preclude the film from possessing substantial value -- School of Rock (2003) is not exactly ambitious, and yet it remains eminently entertaining -- Bad News Bears is slight nevertheless. Rewritten by the same pair who scripted Bad Santa (2003, Terry Zwigoff) and starring that film's vile Kris Kringle, Billy Bob Thorton, clearly Bad News Bears was conceived as an update of the earlier Bears with a shade of the Zwigoff film. However, Linklater's Bears can not match the unrelenting vulgarity of the Santa picture, which in its sustained lack of propriety achieved its own form integrity and demonstrated a clear (if decidedly bleak) world view. The film's mitigation, in this respect, is in part a function of its PG-13 rating. Likewise, Linklater's own political correctness softens the work's vulgarity: sure we laugh at the wheel chaired-character zipping out to play right field, but Linklater does allow him to make a key out. And of course the pitching sensation is female -- perhaps progressive pre Title-IX, but now, such a characterization is nothing more than comfortably liberal. 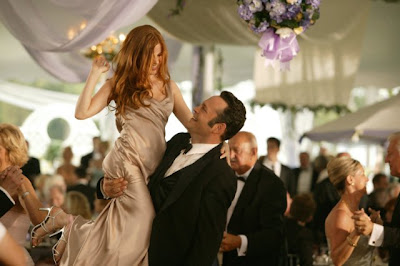 David Dobkin's Wedding Crashers is anything but. In this Owen Wilson-Vince Vaughn vehicle, women are gullible, if not down-right stupid. This is not a film that proceeds according to the Prizzi's Honor or Dirty Rotten Scoundrels cliché, where it might seem that the men are in control, but where it is genuinely the female characters who are orchestrating events. Here, these "wedding crashers" breathlessly manipulate women through the most-transparently phony gimmicks one could possibly imagine; and even, for instance, when the Gloria character shows herself to be a bit wiser than she first appears, she still falls for Vaughn's B.S.

If this makes Wedding Crashers sound unduly reactionary, the fact is that the picture's impolitic qualities make it a renunciation of contemporary cultural values. The fact is that what's good for the goose has long not been good for the gander. Wedding Crashers is the sort of politically-incorrect work that restores the equation (though admittedly there is a limit to such a renewed equality, provided that it depends on the inferiority of one of the two genders). Still, this is a film whose comedy succeeds because it s taboo. And like Bad Santa before it, Wedding Crashers similarly sustains an integrity of impropriety -- the funeral crasher who appears may be a scumbag, but he's also a genius.

Wedding Crashers similarly succeeds because of the charisma and likeability of its leads, Wilson and Vaughn. Amiable without being admirable, like their characters, they give off the impression of being the life of the party, generous with everyone, even if they have less than laudable ends. Excuse the expression, but these are two guys who can really shoot the shit, and come on, who doesn't like that? They're guy's guys, who are as comfortable in a pick-up football game as they are in their ill-gotten moments of intimacy. In a society that has effectively rid itself of masculinity, there is something deeply satisfying about seeing characters like this on-screen. Sometimes sensitivity is gratuitous. Sometimes what is called for is a good punch in the face. Sometimes you just have to call somebody a "pussy."
Posted by Michael J. Anderson at 11:29 PM

"They're guy's guys, who are as comfortable in a pick-up football game as they are in their ill-gotten moments of intimacy."

He further argues about how the film is un-P.C. and that its women are presented as stupid sheep and that the men are in control. 100% true for maybe the first half of the film, but is he ignoring the characters' arcs and the ending? ((SPOILERS)) Vaughn is completely undone by that insane redhead -- who, I might add, certainly has the upper-hand in their relationship every single moment after he beds her for what he thinks is her firs time -- and Wilson turns into a puppy dog the moment he lays eyes on that gorgeous woman who plays his love interest. It would seem to me that, likely not out of any sort of political message but rather an interest to appeal to all demographics and genders, the WEDDING CRASHERS puts on a guy's-guy front but by the end, has its uber-butch heroes willingly accept to domesticity (or, at the very least, monogomy, or sort of odd consenual promiscuity with hot Brazilians...)