The Limitations of Brilliance, Better than Perfection: The Conformist and Au hasard Balthazar 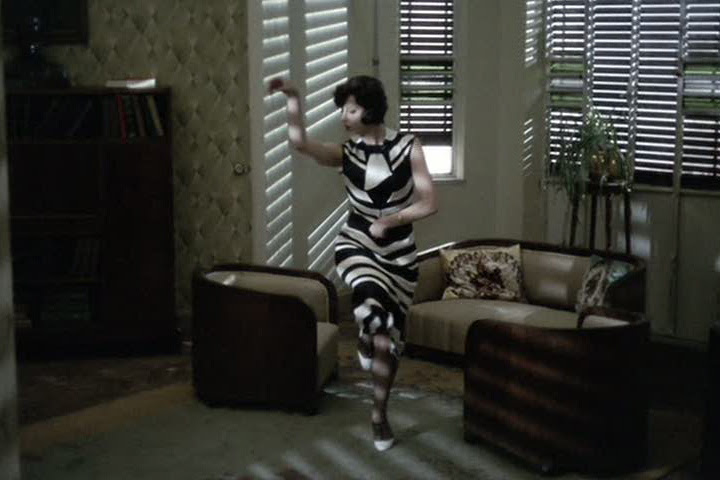 As with few other films, I envy the newcomer as I envy David Niven for having made love to Merle Oberon; that Bertolucci's masterpiece -- made when he was all of 29 -- will be the most revelatory experience a fortunate pilgrim will have in a theater this year is a foregone conclusion.

Exactly. Then again, Bernardo Bertolucci's The Conformist (1970, Italy) may have something else in store for its more seasoned admirers: incipient indifference (albeit on the smallest of scales). Lucky for Bernardo, few spectators fall into this latter category. For reasons unknown, given especially the film's lyrical immediacy, The Conformist continues to be available only on an out-of-print, dubbed VHS format. Doing its best to rectify this grave want, the Film Forum will be screening Bertolucci's opus now through August 11th. And as Michael Atkinson notes, few films this year will be able to rival its potential impact.

From the flashing neon of the opening credits, The Conformist is awash in visual ideas. Or more precisely, so begins its rolodex of unforgettable images. Indeed, there is no final rule for Bertolucci and legendary cinematographer Vittorio Storaro's visual strategy other than that will it lean heavily on the indelible -- be it a whitewashed roof-top asylum, Jean-Louis Trintignant walking alongside a vintage automobile in a canted composition, fallen leaves swept up by a sudden gust, the beautiful Stefania Sandrelli dancing with the even more gorgeous Dominique Sanda, or the latter pounding on Trintignant's automobile window as he looks on impassively, The Conformist is the sum of its visual highlights.

It is also, of course, a parable about fascism, as is confirmed first by its literal-minded title. Then again, The Conformist is a film where everything is made clear, abundantly, whether by a score that highlights significant moments with a bull-horn's subtlety, or in a narrative that never allows its viewer to escape from its Marxist cum Freudian interpretative framework -- right up to a final plot twist straight out of the Psychopathology of Everyday Life. To be sure, The Conformist is a work of boundless talent, but it is also a film of limited mystery, born of the unrelenting certainty beget by Bertolucci's youthful brilliance. Even at its most formally unconventional -- i.e. its temporal leap-frogging -- Bertolucci psychologizes his character's actions (and inactions) so assiduously that there is no mistaking his intentions: a fascist is built according to the measure of his desire for an illusory normalcy corresponding to a supposed cultural normativity, full stop. Though The Conformist may resemble at first truly challenging film art, the clarity of this discourse as well as the directness of its pleasure argue otherwise. This is a work of simplicity, however ambitious, whose first taste will always be its sweetest. With that said, its sumptuousness is not to be missed.

The same spectatorial arc does not apply to another of this year's resurfaced masterpieces, Robert Bresson's Au hasard Balthazar (1966, France), released last month in the U.S. for the first time ever on home video. If The Conformist orchestrates the making of a fascist in its precise detailing of psychological causes, Au hasard Balthazar seems to encounter its protagonists' unawares, articulating the effects prior to and apart from their causes. In other words, Bresson's film showcases life as we witness life, uninformed of the immediate causes of events. However, it is not simply events or actions that Bresson is portraying in Au hasard Balthazar but rather sin; and consistent with the Christian notion of iniquity, it is not something to judge situationally. There are no causes, no justifications for the transgressions represented on-screen. Moreover, the concept is expressed in purely carnal terms -- sin is a matter of flesh; spirit is absent. (It is also of note that in spite of its coldness, Bresson's is a profoundly sensual film in the most literal of senses.)

Of course, absence is the key to Bresson's aesthetic, whether it is his denial of surface expression which calls attention to interiority through referential absence or in his mise-en-scene with its notoriously shallow focus -- rigorously depicted with a 50mm lens -- and tight, medium close-up framing. Similarly, this same austerity figures in his audio track which is as significant for its silences as it is for its amplified ambient sounds. Each unit of sound and image is a precisely modulated expression of what the director wishes to relay (less any superfluous detail). In this way, Bresson's past as a painter is drawn into particular focus inasmuch as his cinema manifests the same total control over his subject matter, even if there is not a single frame in Au hasard Balthazar that can rival the scores of unforgettable images in The Conformist. Then again, Bresson's film seeks nothing more than the representation of the ethereal in a medium beholden to the material. His is a reproduction of a life unseen. Even so, Bresson's cinema stands above all other's in its equitable presentation of sound and image. Au hasard Balthazar, along with works as A Man Escaped (1956) and the perfect Pickpocket (1959) -- which it nevertheless exceeds by virtue of the concreteness of its metaphor -- represent a cinema that has finally become fully itself (as Marguerite Duras once said), bringing into harmony its audio and visual components for the very first time.

But of course, Au hasard Balthazar is not form alone, but is instead the director's most carefully constructed Christian allegory. To begin with, the film's title character is a donkey -- a creature with its own special relationship to both the nativity and also the crucifixion narrative, named after one of the three wise men. After an idyllic youth spent with children in the French countryside, Balthazar becomes a beast of burden, used and abused by a series of owners. He is both a silent witness to their sin and a carrier of its weight, as when he is used to smuggle goods at night. Yet it is truly the former that best describes the animal's narrative agency: this is a film about the mankind for whose sins Christ died. When finally the animal's life comes to an end, Bresson makes the analogy precise surrounding the creature with sheep. Above all, Au hasard Balthazar is the great Christian allegory of the twentieth century.

Then again, given the director's refusal to explicate psychology in keeping with his programmatic realism, Au hasard Balthazar remains open to those who would deny this reference. By a subtle shift in emphasis, Bresson's film becomes a Marxist critique of capital or proof of God's death provided the picture's unending bleakness. Either way, it is for the audience to interpret, not the artist. Surely, Au hasard Balthazar is not so much reality itself as it is a mirror, calling all spectators to an act of spiritual evaluation -- with a Christ-figure at its core. The truth may be on-screen, as it is in life, but it is no easier to decipher. The depths and mysteries of Au hasard Balthazar are as deep as life itself.
Posted by Michael J. Anderson at 4:55 PM