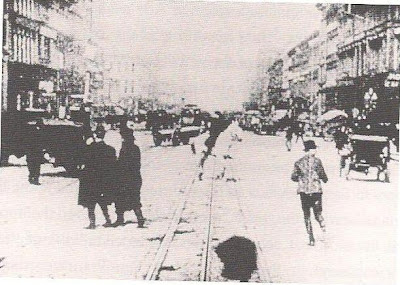 Ernie Gehr's Eureka (1974-1979), which screened in 16mm last night at Yale University's Whitney Humanity Center, constitutes a synthesis of two of the more noteworthy trends in the North American avant-garde cinema of the late 1960s: of the ontologically-inflected long-take structuralism of Michael Snow's Wavelength (1967) on the one hand, and of the rephotographed interrogation of the silent image in Ken Jacobs's Tom, Tom, the Piper's Son (1969) on the other. In Eureka, the Milwaukee-born experimental filmmaker has re-photographed a 1905 phantom-ride newsreel of San Francisco's Market Street, multiplying each frame eight times. With the picture's 16fps projection, Gehr has stretched the original five minute film into a new thirty-eight minute form.

Following in the tradition of Snow, and prefiguring the latter-day structuralist cinema of James Benning (Ten Skies and 13 Lakes, both 2004), this extended duration is comprised of a limited number of takes that will conclude at an immediately discernible juncture - in its case, when the phantom-ride reaches a skyscraper at the end of Market Street. Like Tom, Tom, the Piper's Son, Gehr's work reuses an early film source for new conceptual ends; however, unlike Jacobs's painstaking horizontal analysis which organizes a swarm of detail into set of discreet events, Eureka emphasizes the vertical flow of continually changing images. In other words, Jacobs's film explores simultaneous movement within the frame, while Gehr's privileges sequential movement between frames.

Indeed, Eureka, in greatly slowing the visceral five-minute document, has nevertheless retained the experience of the unexpected that accompanies the mobile newsreel in the urban environment. It is very much this experience of the unexpected that recommends Eureka and accounts for its aesthetic interest. Like the Benning films noted above, Eureka plays on audience distraction throughout the majority of the film's thirty-plus minutes (save for the spectators' increased intensity as the skyscraper nears) utilizing our inevitable drift and subsequent renewed focus to make what passes exceedingly slowly before our eyes exceptional and even exciting. That is, after loosing focus, we take a look at the film again and what we see is surprisingly different than our last vantage. For instance, as the intensity of the natural light source wanes, the bleached image is replaced with a more nuanced mise-en-scène that discloses the brick paving unexpectedly, relatively late in the film's run-time.

However, it is often less the effects of light and shadow on the original picture's high contrast stock than it is the effects procured by the slowed motion that secures the picture's substantial aesthetic interest. In particular, with automobiles and streetcars passing surprisingly close to the image, we are not only made to experience the breathtaking pace of turn-of-the-century urban life as is undoubtedly manifest in the original, but are also forced to consider precisely where the camera is located vis-à-vis the oncoming traffic. That is, with cars seemingly breaching the space of the appartus, the (focal) distance between the camera and the world depicted is underlined. We are made re-aware of the camera's location in space and of the world that we never get in reverse.

Eureka yields infinitely more information than is at first clear. With the camera moving slowly forward, stretching out the image's frontal spatial field, pools of light and new corners of interest open themselves up with each successive frame. What we have is a cinematic Zeno's paradox, where the sense of of expanding space seems to cancel our movement toward the distant terminus, while a hightened awarness of the still frame brings the medium's fundamental stasis is back into view.