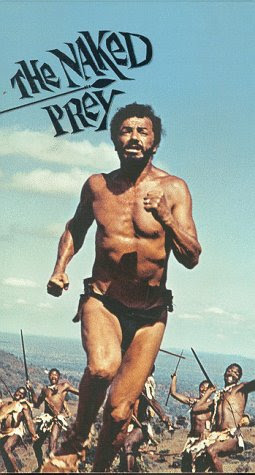 Actor-director Cornel Wilde's The Naked Prey (1966, Paramount), from a Clint Johnson and Don Peters screenplay, seems to have introduced a revisionist ethos into the adventure picture's postwar safari cycle. Wilde's film followed four years after the safari form's ultimate masterpiece, Howard Hawks's Hatari! (1962, Paramount), which itself was released after a near decade gap in the production of A-pictures of the type - namely, of such pictures as King Solomon's Mines (Compton Bennett and Andrew Marton, 1950, MGM), The African Queen (John Huston, 1951, United Artists), The Snows of Kilimanjaro (Henry King, 1952, Fox) and Mogambo (John Ford, 1953, MGM). While Hatari! effectively fulfills the earlier tradition, finding solutions to a number of the form's ongoing problems - not the least of which was the issue of how to show its actors in the same spaces as its African wildlife, i.e. how to show its stars in real or at least plausible danger; Hawks did exactly this by using his performers as their own stunt people - The Naked Prey retreats from Hatari!'s literal safari experience toward a form closer to the picture's 1950's era touchstones.

The Naked Prey relies on two ontologically-differentiated registers, documentary and non-documentary, that rarely converge within the picture. When we do see the film's director-star in the same space as the wildlife, he occupies a plane far removed from those in which we see an elephant or a giraffe, for example. (The one exception to this rule seems to be snakes with which Wilde on a couple of occasions comes into close contact.) In this respect The Naked Prey renews the mixed nature of the 1950's period work that Hatari! and its filmmaking as a safari mode did much to overcome. In other words, the lack of realism that the earlier pictures worked so hard to minimize is again manifest in the 1966 picture.

Backing up, The Naked Prey treats a safari guide's (Wilde's) attempt to escape from and subsequently outrun a band of African tribesmen after his employer - a wholly unsympathetic figure who incredibly professes a desire to go into the slave trade - needlessly runs afoul of the aforesaid tribe. In this regard, The Naked Prey might be regarded less as a safari film than as an adventure picture which uses occasional safari footage as does The African Queen for instance. Either way, The Naked Prey, like Huston's picture, features the same problem that all 'A' safari pictures share - again how to believably combine documentary and non-documentary footage to simulate a single diegesis. In its case, the fact that Wilde shot on location in South Africa mediates the visual differences prompted from a combination of location and studio settings found in such pictures as The African Queen or The Snows of Kilimanjaro. Here, it is simply that the footage is sutured by its traditional shot/reverse-shot pairing of images.

If in terms of its style The Naked Prey does not exactly figure an intervention into its genre, the work's narrative structure and certain of its dramatic details nevertheless indicate a true revision of form. (Hatari! on the other hand is all dialogue; Hawks's picture, along with its 1959 sibling Rio Bravo, provides nothing short of a model for the cinemas of such word-obsessed auteurs as Eric Rohmer and Quentin Tarantino.) For one, this is a film that features very little dialogue following Wilde's initial escape from the tribesmen. Once on his own, nearly all of the conversations we hear are those of the Africans' which Wilde has chosen not to translate. In these instances, the English-speaking viewer is forced into a position of 'other,' prevented the experience of knowing what is being said - in comparison to an imagined South African public (speakers of the unnamed dialect) who would receive a much different dramatic experience. Likewise, the picture's overarching narrative, of a man silent and on his own in the African veldt, procures an effect fundamentally dissimilar to those secured in most adventure films: this is an anti-adventure film of a sort. Far from the visceral experience of John Wayne and company in speeding trucks on the trail of real African game, Wilde's picture gives us the anti-spectacle of his character hunting a small lizard with a spear (which we see in an extended-duration long shot).

This is not to say that The Naked Prey entirely lacks action. During the initial capture of the white safari-goers, for instance, Wilde treats us to their ritual torture in a series of graphic set-pieces that reaffirm the period's violent turn. Likewise, in true exploitation fashion (we also see many topless female natives during the same scene) our protagonist is forced to kill a number of his pursuers one by one. If The Naked Prey does not therefore connote a revolution in visual form inasmuch as we are given shots and their reverse angles throughout the majority of the picture, Wilde's film nonetheless signals the most graphic entry into the safari tradition: not only in terms of its human violence, but in that of the animal world as well, which Wilde includes to allegorize the human savagery depicted on screen.

In the end, The Naked Prey emblematizes a key direction in the post-classical Hollywood cinema: namely, of a revisionist cinema that supported a new permisiveness in content and narrative experimentation, while largely retaining the shot/reverse-shot armature of the classical mode. While the latter choice does not entail a value judgement in its own right, the effect of this technique in a work following Hatari's spatial integration of performers within a wild context - which itself relied on a formal revision of classical decoupage in the form of a greater density of multi-figure, extended duration shots - marks a regression in the safari picture's historical development as a form with its own unique set of problems. Apart from these aesthetic concerns, however, The Naked Prey emerges as an important node in the history of the adventure picture.

The Naked Prey is currently available on Criterion DVD and will be broadcast on TCM February 1st at 4:00 PM.
Posted by Michael J. Anderson at 5:22 PM