New Film: The Diving Bell and the Butterfly 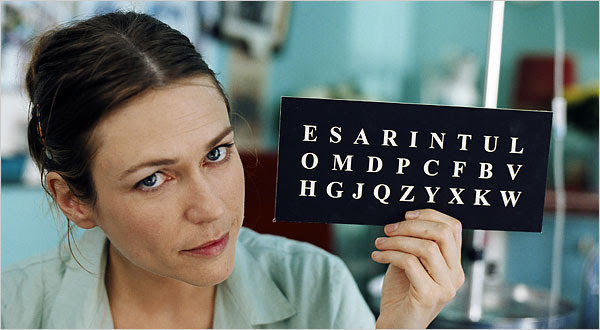 Julian Schnabel's The Diving Bell and the Butterfly (Le Scaphandre et le papillon), adapted from Jean-Dominique Bauby's biographical text by Ronald Harwood, recently placed second in the National Society of Film Critics' annual feting of the year's best pictures, following Schnabel's best director citation at Cannes this past spring. Even in Tativille's own accounting of the year's finest films, conducted in concert with sister sites Fourteen Seconds, Scarlett Cinema and Termite Art, The Diving Bell and the Butterfly received as many first-place mentions as any other film, including my own personal favorite The Flight of the Red Balloon. It was, in short, one of the year's most important films in the view of many.

Of course, The Diving Bell and the Butterfly has had its detractors as well. In last week's Slate "Movie Club", for instance, Village Voice film critic Nathan Lee called the director's point-of-view camerawork "Brakhage for dummies," while fellow club member and Voice critic Scott Foundas noted that its style was "caked on like a heavy plaster." To put an end to the suspense, this reviewer's position is far closer to those of Lee and Foundas than it is to my esteemed blogosphere colleagues and to their allies in the critical mainstream. The Diving Bell and the Butterfly will not be, in my mind, one to remember among the current crop of critical favorites.

Nevertheless, The Diving Bell and the Butterfly cannot be faulted for lacking visual ideas - or more importantly still, for calibrating those ideas to match its narrative content - that is the baseline of any appreciation of film as an art. Indeed, from the film's opening frames, following an admirably stylish credit sequence, Schnabel makes these ideas and indeed the singular problem of his task in adapting Bauby's work eminently clear: namely, how does one match the interiority, the sense of imprisonment in one's unresponsive body? Schnabel's choice is as Lee says to adopt a strategy similar to that of the American avant-garde master, Stan Brakhage, though without that filmmaker's didactic program. Whereas Brakhage can be said to have pursued a new form of subjective filmmaking that sought to encourage a pre-rational, pre-linguistic form of seeing, Schnabel's similar aesthetic attempts to simulate the phenomenal experience of a newly cognizant coma patient (Mathieu Amalric, Kings and Queen) and again his entrapment in his stroke-paralyzed body.

Schnabel's particular technique, which my wife ruefully noted lacked the materialist (and optical) components of its avant-garde applications, presents frequent digitally-enhanced fluctuations in focus to intimate the lead's strained perception, flicker effects to match his communicative blinking and a hollow, metallic reverberation to suggest his inability to project verbally, in addition to its relatively straightforward visual POV. When Bauby's eye is sewn shut, however, which the filmmaker shows in all its cringe-inducing spectacle, Schnabel reverses to a position outside the figure's body, in essence cheating to further maximize the scene's tactile impact.

The above choice portends a conventionality that characterizes The Diving Bell and the Butterfly as a whole: this is international secular humanist cinema avant la lettre; no genuine deviation from the formula will be possible. To this end, Bauby glibly mocks the large number of gods that have been implored on his behalf and the monks who have been unable to secure a miracle. Willfully, Schnabel even discloses the author's choice of an ending with his character standing in his wheelchair (only to learn later that it is a dream). In so doing, Schnabel refuses the magic of such an ending, should he decide to follow Bauby's suggestion, or to rather show this impossibility and thus to reinforce the film's strident secularism. Either way, The Diving Bell and the Butterfly is a cinema without magic, be it that of religion or of cinema itself. (The film's one nod to cinema's transcendent properties is its rather ordinary and even trite acknowledgement that Bauby can travel anywhere in his mind.)

Ultimately, this is the greatest problem that The Diving Bell and the Butterfly manifests: a lack of, and indeed a foreclosure against any surprise. As soon as the aesthetic is set, very quickly into its running time in fact, little else is possible. The Diving Bell and the Butterfly is the solution posed by the problem of its interior narrative. Once Schnabel's choice is established, little remains except to play to expectation, and to tell us that Bauby still has the same human emotions that we all do. Chief among these natural sentiments is his sexual frustration, which accompanies the camera's numerous peeks at his gorgeous therapists' legs and cleavage. Such are Schnabel's insights in a film that we might finally say lacks mystery. In demystifying its subject all The Diving Bell and the Butterfly leaves is its means for doing so: an expressive rather than scientific subjectivity.
Posted by Michael J. Anderson at 9:42 PM

I saw you went into this movie not wanting to like it. Prove me wrong.

You're not wrong, but in my view that doesn't invalidate my position. (Lisa went in wanting to like it and also didn't care for it.) Of course it would be convenient to mute my criticism on the basis of my hesistancy to love the film, but I still think I made arguments against its critical elevation, which requires debunking rather than a dismissal on the basis of my skepticism. Make an argument; until then, I will persist in my view that I am correct.

According to Pam's syllogism ("If you don't like this movie, you can't be human"), Mike is a monster from outer space clothed in human skin. That is not an argument: it is science. Prove me wrong!

Human I may not be, but at least I still have intelligence. I would love to hear anyone who believes "The Diving Bell and the Butterfly" to be great filmmaking to explain why this is the case. The fact that the only objections I have encountered thus far have been attempts to find allibis for my dislike - ie that I went in thinking that I wouldn't like it or that I'm not human (or a more measured position that I somehow missed its manifest humanity) - seem to reveal that the film is indefensible. Until I get actual, reasoned arguments I will persist in my view that "The Diving Bell and the Butterfly" is not very good. Here's your chance.

Ok. So I agree with you Michael.. mostly because I think the movie does not do justice to the content of the book.
Without mentioning cinema issues...