New to DVD: The Assassination of Jesse James by the Coward Robert Ford + Best Picture Preferences 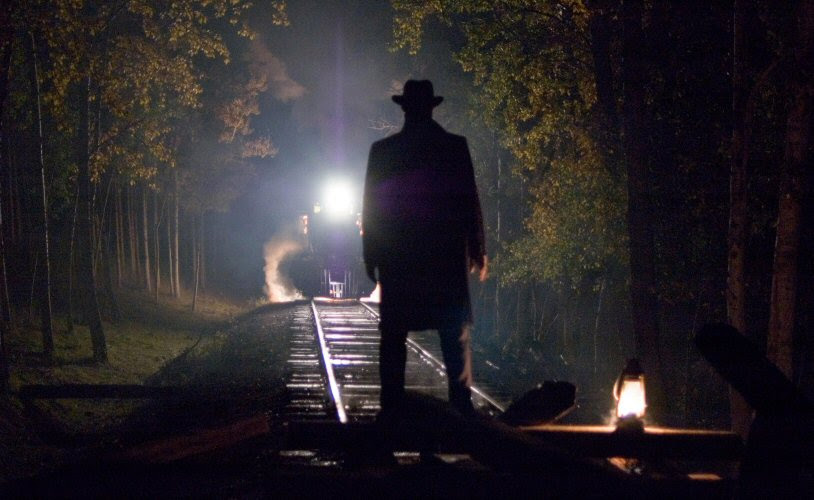 Writer-director Andrew Dominik's The Assassination of Jesse James by the Coward Robert Ford extends both its generic model - the revisionist Western as exemplified by Sam Peckinpah's 1962 masterpiece Ride the High the Country - and also the early twenty-first century's preoccupation with proto-cinematic media (cf. Neil Burger's 2006 The Illusionist, among others). With respect to the former, the picture's near ubiquitous situation within the winter months alone (as compared to Ride the High Country's autumnal setting) locates the film after the Western, to the extent that is that Ride the High Country represents the symbolic end of the form and the director's subsequent The Wild Bunch (1969) is the supposed last Western. Indeed, The Assassination of Jesse James... figures not only a tradition that is already over (the Western), but also an era that has similarly concluded, a hero whose career (as robber) finishes shortly after the film's beginning and most obviously of all, whose life, the title tells us, will soon cease. The Assassination of Jesse James... does not preside over the death of a form; it lives after the Western's death.

Which leads one to Dominik's film's obsession with the proto-cinematic and all things nineteenth century - at a time that many of the earlier era's inventions are being displaced by newer (digital) technologies. In fact, The Assassination of Jesse James... exhibits frequent digital manipulation to simulate the visuals of the earlier period: i.e. with the edges of the frame blurring to intimate similar effects in the daguerreotype or on early film stock; and with monochromatic visuals that suggest the tinting of a pre-Technicolor era. Moreover, with the assassination complete, the eponymous Ford (Casey Affleck), himself a collector of Jesse James dime novels, reproduces the incident on stage. In sum, The Assassination of Jesse James... seeks the recreation of not only Jesse James's (Brad Pitt) last days but of the formal preconditions for cinema itself - again at a time when it is being transformed under the digital sign.

Nevertheless, The Assassination of Jesse James... may be less notable for its allegorical and generic valences, as noteworthy as Dominik's interventions may be, than for Roger Deakins's cinematography and for Affleck's performance - both of whom have secured well deserved Academy nominations. Regarding Dominik and Deakins's visuals, The Assassination of Jesse James... features a large share of the year's most unforgettable imagery, from the arrival of the train during the picture's first act robbery - a bright incandescent light glows in the distance with the wide-hooded thieves waiting in the fore; the robbers subsequently cross through the golden hued, claustrophic interior of the night train - to the frequent time-elapse skyscapes that decorate the work. To be sure, this is a work of the imagistic and of visual ornamentation (style here is certainly an add-on) though it is also rhetorically cognizant of its form's past and particularly to the equally image-oriented John Ford - and to that director's shadow-cast foregrounds with well-lit landscapes framed beyond.

And then there are the film's performances whether it is Pitt's stabilizing star-turn or Affleck's squeaking, fidgety Robert Ford, whose villainy this picture largely refutes on the basis of his sympathetically pathetic portrayal. Ford is the original celeb-worshipper who happens to be as at home in our age as he seems appropriately suited to the era of James. It is a performance of astonishing singularity to Pitt's notable abstraction (in the words of film scholar Lisa Broad).

All of the above should have made The Assassination of Jesse James by Robert Ford, in a perfect world, worthy of a best picture nomination. At the very least, this writer would argue that The Assassination of Jesse James... is clearly superior to three of this year's selections - Joe Wright's Atonement, Jason Reitman's Juno and Tony Gilroy's Michael Clayton - as good as each of these films might be, and is every bit the equal of a fourth, Paul Thomas Anderson's impressive if somewhat overrated There Will Be Blood. (Making a film that feels like one's sources - namely Kubrick's Barry Lyndon or Terrence Malick's Days of Heaven, which is itself a key point of reference for Dominik's picture - does not assure a film's greatness, even when it does demonstrate its maker's considerable talent.) However, in its effortless combination of Western and horror syntaxes and noir semantics, No Country for Old Men remains the cream of this year's best picture crop.

Apart from No Country for Old Men and The Assassination of Jesse James..., the aforementioned perfect year might have also included nominations for Wes Anderson's significantly underrated The Darjeeling Limited, David Cronenberg's English-language film of the year, Eastern Promises, and David Fincher's career-peak, Zodiac. Still, these personal preferences aside, 2007 proved a uniquely strong year in the American cinema, and even among those pictures cited by the Academy. Thankfully no Crash's or Little Miss Sunshine's in the lot, regardless of what Juno's most fervent detractors might believe.
Posted by Michael J. Anderson at 10:42 PM

Thank you for your extremely insightful comments about The Assassination of Jesse James...", a most underrated film. As always, your observations are brilliant, which makes every new post a most anticipated event.

As for the Best "Picture" (and why does the Academy persist in calling it that, when no one refers to films or movies as "pictures" any longer?), I agree that "There Will Be Blood" is highly derivative; one could also include other Kubrick films (most notably "Eyes Wide Shut," "The Shining," and "2001"), as well as "Citizen Kane" and even "Chinatown") but in your attempt to correct the critical gushing you may have underrated that "picture."

Speaking of Kubrick, let's not forget that a) the Academy voters never saw fit to give him an award for directing and b)"2001" wasn't even nominated as Best Picture. How could they have managed to find five better films in 1968 when many of us cannot find five better films ever? Well, the nominees that year were "Oliver," "Funny Girl," "The Lion in Winter," "Rachel, Rachel," and "Romeo and Juliet" all of which could reasonably listed as among the worst, or let's at least say, negligible films of the 1960s. So much for the significance of Academy Awards!

Thank you first for your very kind words.

While it may be that history will ultimately prove me wrong in my assessment of "There Will Be Blood," it seems to me at least in this moment that Anderson's latest isn't quite many critics are making it into: namely, a work to stand beside many of their favorite films of New Hollywood. To me, Kubrick and Malick attempt to say more about the mechanics of our universe than Anderson attempts, while Welles and Polanski each say far more about their film historical sources. Just my feeling; I still liked it though.

Lastly, you of course are right to point out that the Academy ignored Kubrick throughout his brilliant career - and indeed "2001" is the most conspicuous omission of all. And yes, I don't hold any illusions that the Academy will ever get it right. Its more that I simply wanted to relay my favorite English-language pictures of the year under the pretence of a response to Sunday's event.

Thank you for your reply. I absolutely agree about Kubrick and Malick versus Anderson.

Regarding the Academy: this is rather like beating a possibly deserving-to-die horse, but now that I re-read that list of Best Picture nominees from 1968, I believe that it may be the worst they ever came up with. I should probably go through the Academy's database to verify this, but offhand I am certain that in every other year, they had at least one nominee that, although probably not deserving of being listed anywhere near your top ten for that year, wasn't disgraceful. The distance between "2001: A Space Odyssey" and any of the five that were nominated is so vast that it's probably a good thing that "2001" wasn't among them. Imagine if it had lost to "Oliver."