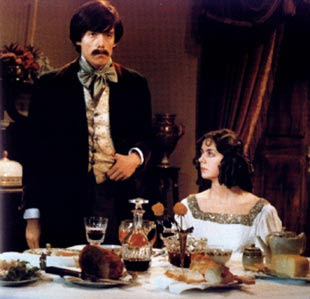 Manoel de Oliveira's Francisca (1981), from the director's adaptation of Agustina Bessa-Luís's 1979 novel Fanny Owen, represents one of the most complete expressions of the filmmaker's eight decade career. Whether, as is claimed for the film, that it showcases the director's mature style for the first time, Francisca regardless presents Oliveira's "open air" theatrical aesthetic at its most fully realized, and provides a template for the filmmaker's greatest accomplishments of his strongest phase (No, or the Vainglory of Command [1990] and Abraham's Valley [1993] come to mind, as well as the very similar 1999 The Letter). Francisca is that proverbial work where its maker's universe is fully present and transparent.

Of course, Olivera's universe is singular for its absence of narrative universes, which is to say its lack of diegetic worlds. Following a letter recounted in voice-over and the concurrent film credits, Oliveira frames the first of the picture's male protagonists staring directly into the camera as an Oporto costume ball proceeds behind. With the lead turning around, the party's revelers approach the camera gesturing as they cross before it. This strategy of approximate direct address, where the film's figures look toward, into or even through the camera recurs throughout Francisca, particularly in two-shot framings of characters blocked immediately before the apparatus in dialogue.

In these conversations, the figures repeatedly reject eye contact with each other, often again looking directly into the camera. At times, this strategy is somewhat more naturalized, as when the persons stand one in front of the other looking in the same direction - not that it is so accurate to call such a figural organization "natural" - or more commonly, and even less naturally, when they sit side by side staring straight ahead or across each other's gaze.

As a formal strategy, Oliveira's insistently frontal framing and his dependence upon un-met glances reduces the sense that the spectator is looking onto a world that exists in its own right, into a diegetic or story world. Rather, Oliveira's art comes into being purely in front of the camera, as the fragments of plot that are told in the voiced-over letters, frequent intertitles and in the illustrated tableau framings that construe the narrative. The use of the term "illustration" to refer to these sequences is used very specifically to emphasize the lack of mimetic effect; what we have here, as in so much of his subsequent work - including his 1988 filmed opera, The Cannibals, and his opus to Portuguese military defeats, No, or the Vainglory of Command - is a telling rather than a showing, where the elimination of a cogent fictional world reaffirms the primacy of the narrative act.

This emphasis may also explain the film's literary subject to the extent that one of the piece's three leads, Camilo (Mário Barroso; modeled on a second Portuguese writer of the same name), is not only an author by vocation, but in fact delivers a key, life and narrative-shifting letter whose provenance remains unclear - it may even be his product - repeatedly, prophetically warns the eponymous female protagonist (Teresa Menezes) that her lover José Augusto (Diogo Dória) will kill her, and later recites a second character's monologue verbatim, indicating his possible agency in the generation of Francisca's narrative. In other words, he seems to act both as a facilitator for the narrative and also possesses an awareness of the picture's narrative that exceeds his spatio-temporal situation. Camilo, is in short, one of the artist's self-portraits in his own work (cf. his Bovary in Abraham's Valley, for instance).

Also like Abraham's Valley, which along with Francisca represents the director's other career peak, Oliveira's picture seeks to convey the "chaotic state of society," in this case explicitly in the supremely "egoistic" figure of José Augusto. Likewise, Francisca (once more in line with the director's 1993 masterpiece, among other works) similarly imagines its medium as the synthesis of a dramatic arts tradition that includes theatre, opera and the novel rather than as an ontologically distinct medium. Francisca represents an art that does not attempt to pass itself off as life - it is by no means "pure cinema" - but rather as a latter-day instantiation of Europe's high and low art traditions alike. Francisca expressly shares in the artifice of its extra-cinematic sources.

In the final analysis, Oliveira's work establishes the endpoint of a theatrical modernism, a third modernism that is neither chiefly literary in its origins (Antonioni-ennui) nor derivative of modernism in the visual arts (Brakhage, et al.), but instead follows a Brechtian formula that operates to sever any connection to dominate cinema. (Among other films, Jacques Rivette's late 1960s/early 1970s corpus also belongs to this tradition. In fact, with respect to Oliveira's film, its emphasis on cruelity also suggests the inspiration of a second theatrical source, Sartre.) Francisca is the reverse, the negation of everything we think we know about the cinema, at least since Bazin. It is a cinema possessive of a counter-intuitive ontology that nonetheless remains fully plausible in the implementation of its aesthetic. Against everything we know, Francisca shows that the medium is implicitly theatrical, by its telling.
Posted by Michael J. Anderson at 10:11 PM

Excellent observations, Michael. Did you get a chance to see Doomed Love as well?

I'm afraid I did not. My relatively recent move to New Haven has made my visits to NYC less and less frequent. Did you get a chance to see it, and if so, what was your opinion? Is there something new with "Francisca"?

I'm going to have to wait until the series arrives in Chicago but I will definitely make an effort to see it then. My only problem is going to be in trying to determine which films to attend as I can't possibly attend them all and yet there is so much here that is so very rarely screened.