On the Occasion of Rewatching the Turning Gate: A Korean Rohmer 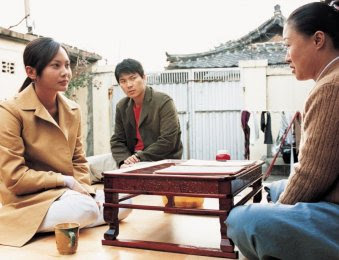 I.
Writer-director Hong Sang-soo's 2002 Turning Gate (a.k.a. On the Occasion of Remembering the Turning Gate) presents one of the clearest expressions of the Korean auteur's artistic universe: in the case of Turning Gate, the director's signature narrational duplication is located in the interplay between a series of on-screen captions and the subsequent story fragments that either literally or obliquely illustrate the aforesaid titles. Likewise, the film's two-part structure, though not a literal retelling as in his previous minor masterpiece Virgin Stripped Bare by Her Bachelors (2000), nevertheless procures a doubling, in this case of the two women that the film's thespian lead Kim Sang-Kyung romances over the course of the narrative. (In this way Turning Gate looks forward to the director's definitive 2006 Woman on the Beach, with which it also shares the subject of an artist protagonist - though in Hong's 2002 film his male lead is viewed far more sympathetically.)

Of course, commensurate with the director's wryly cynical take on the male-female dynamic, Kim's Gyung-soo fails to secure lasting companionship with either the aggressive Myung-sook (Ye Ji-won, pictured above) or the beautiful and ultimately willing, if married, Seon-young (Sang Mi-chu), whom Gyung-soo pursues every bit as fully - following her initial rebuffing. Importantly, his quest to land the buxom Seon-young supposedly replicates a similar strategy of conquest that the lead undertook with the same woman fifteen years previously, providing yet another replication for Hong's principal narrative strategy. When Gyung-soo's chosen love interest subsequently and finally rejects the gentleman, Hong uncharacteristically displaces the protagonist's interior melancholy unto a sudden rainstrom, providing the film with a concluding visual summation of theme - in much the way that the director will even more sophisticatedly match Woman on the Beach's narrative preoccupations with the final image of his heroine dislodging her car from the mud. To return to Turning Gate, this is Hong at his most Wongian, where the wrong time has made the once-in-a-lifetime romance impossible.

Then again, Turning Gate is not nearly as serious as all that: typical of the director's corpus more broadly, Hong makes great use of static, long-take framing to emphasize the quotidian absurdities that comprise his narrative (a wonderfully telling example features Gyung-soo climbing atop a table for a second consecutive meal-time kiss). Indeed, early in Hong's film it seems as if the director might be limiting himself exclusively to a one scene-one take strategy similar to the punchline idiom of Tsai Ming-liang. However, with the appearance Myung-sook, Hong opens the sequence with an uncharacteristic establishing shot and thereafter cuts within the constructed space, thus opening the filmmaker's seemingly closed system.

This same evolution in form is experienced in the picture's increasingly opaque and long-winded illustrations of the the numbered captions. Following a series of very short and seemingly redundant expositions of the titles, Hong's narrative moves further and further afield from the stated chapter headings, at times even failing to directly express their stated purposes - as when we are told that Myung-sook will tell Gyung-soo that she loves him. (All we see is her passioned love-making to the lead - an expression of this same feeling perhaps?) Indeed, in this same segment, we are given the caption before being introduced to Myung-sook, thus cuing us to wait for her entry into the narrative, which we are assured will be pivotal. Similarly, the second female lead gives Gyung-soo another name, which though rather inconsequential to their initial meeting, throws us off as spectators given that Hong has used her real identity as the cue in the corresponding title. Hence, Hong's use of this strategy at times serves more to confuse than to clarify the focus of the director's narrative. He uses the technique against his story, to separate one storyteller from the other.

If this theme of the twice-told narrative is all Hong, the basic narrative structure of consecutive seductions closely resembles one of the undisputed masterpieces of Hong's clearest ancestor, Eric Rohmer's My Night at Maud's (1969). In that case, Rohmer's Catholic lead, though tempted, fails to consumate his first encounter. By contrast, Hong's passive intellectual goes ahead with it, placing the figure in a tradition of the flawed Korean male stretching back to at least Kim Ki-young's startling The Housemaid (1960). As Gyung-soo meets his second option, whom like Christine in My Night at Maud's he also first spots prior to the first woman - though its unclear as to whether he actually remembers the incident fifteen years prior - Hong's lead, like Rohmer's, goes into active mode, doing things he supposedly has never done before. However, unlike the French master's treatise on Jansenist predestination, Hong's lead is explicitly not fated to be with his chosen mate. (In the use of taro-like cards, Rohmer's Summer/The Green Ray [1986] seems to be the more direct reference, as it does also for its utilization of bright green title cards to match Rohmer's chosen hue-key for that earlier picture.)

Further extending Turning Gate's debt to My Night at Maud's is the latter picture's inclusion of a third-wheel old friend in the first part who is also hurt by the hook-up (real as opposed to expected as in Rohmer's picture) in addition to its more basic romantic geometry that Hong's and Rohmer's collective corpuses respectively share. In terms of narrative, Turning Gate also derives fairly decisively from Rohmer not only in its non-work settings (here Gyung-soo is between jobs; in Woman on the Beach, the Rohmerian holiday location is explicit) but in the manner that they are told, by the use of intertitles (cf. Claire's Knee [1970] and Summer/The Green Ray) and the film's characteristic temporal ellipses. That is, Hong, like Rohmer before him, tells his chronological story in brief snippets of narrative that combine to construct the discourse on the basis of disparate, often comic human interactions. Of course, the internal coherence of Rohmer's individual narrative systems gives rise, along with his consistent visual strategies and most of all, the persistence of a limited set of themes, to the sense of his art as a closed-system ala Piet Mondrian. Here, again, Hong allows this consistency to unravel in the increasing durations of his segments, establishing his formal contribution to the Rohmerian idiom he so distinctly adopts. Hong loosens Rohmer's rigidity.

II.
One of the bigger weakness of the "ten best lists" that remain one of the most conspicuous features of this site is their ultimate inability to provide an accurate accounting of which works are most important by any given author, even if the repeated presence of certain directors demonstrate their relative importance to their particular times. In the case of Hong - who at this juncture appears to be one of the key figures of the current decade along with such leading film artists as Apichatpong Weerasethakul in Thailand, Jia Zhangke in China and David Cronenberg in the Anglophonic world - this seems particuarly true, due in no small part to the significant variations in quality that emerges from year to year. As such I have constructed a taxonomy (presented below) to register what I see as the relative quality or importance of his features, which no less than the lists themselves, is open to revision. In my opinion, it is a format that might be replicated for any director. (I have underlined films on my annual ten best lists to illustrate my point.)

Career Peaks: The Power of Kangwon Province (1998), Woman on the Beach
[Exceptional Works that Rate] Just Below Peak: Virgin Stripped Bare by Her Bachelors, Turning Gate
Varying Degrees of Good: The Day a Pig Fell into the Well (1996), Tale of Cinema (2005)
Works of Mixed Success: Woman is the Future of Man (2004), Night and Day (2008)

Wonderful! Hurrah for another list, albeit a short one. Woman on the Beach will be here in the next couple of weeks. I can't wait....

For me it's interesting that you rank Woman on the Beach amongst Hong's best, since it is easily my least favorite. Maybe I owe it to myself to give it another spin (and I no doubt will someday), but I found it to be a piecemeal reiteration of his recurring themes lacking in innovation or improvement. I wonder if I would feel differently if I had seen it with you like so many of Hong's earlier films?

That's a good question, Mike. On a personal level, Hong's films will always be associated with your former Manhattan digs - on hot summer afternoons if my memory serves - and my opinions were obviously shaped by our post-viewing discussions. I remember watching "Turning Gate" together and us both being struck by the feeling that it was one of his best, or receiving your view that the point of "Woman is the Future of Man" is about pretty much there in the title. As one can see in my rankings, it remains the most allusive of his films for me. I should ask, have you seen "A Tale of Cinema" yet, and if so, what did you think?